Elsie Dean is not concerned about how, or when, or even why B.C. NDP Leader Adrian Dix arrived at his position against increased oil tanker traffic. She is just happy he got there.

"We may not have to lay down in front of the bulldozers after all," said Ms. Dean, a founder of a Burnaby community group that is fighting the proposed expansion of Kinder Morgan's Trans Mountain pipeline, which terminates near her home. The 89-year-old Ms. Dean and her 300-member group are door-knocking in Burnaby North, a key swing riding that is home to its oil refineries and loading terminals, to encourage voters to use their ballot to help shut the proposal down.

"I'll say vote for the NDP or the Greens because they are against this."

The four Burnaby constituencies are always hard-fought battlegrounds for both the NDP and the Liberals. In Burnaby North, Liberal incumbent Richard Lee won by a little more than 800 votes in 2009. He's now facing pressure from a variety of environmental groups who see the riding as fertile ground to put their issue on the political agenda.

"There is only one major party leader who hasn't come up with a position on oil tankers, and that is Christy Clark," said Eric Swanson, the No Tankers campaign director for the Dogwood Initiative. The conservation group has signed up 3,100 opponents to oil tanker traffic in the Burnaby ridings, and their volunteers are also on the ground pushing their message here.

The Liberal Leader sought in Monday night's television debate to paint Mr. Dix as untrustworthy because he abandoned his initial stand – that he wouldn't comment on Kinder Morgan's expansion plans until the energy company filed its formal application. But Mr. Swanson said the NDP's new-found opposition is a no-lose proposition.

The NDP will, however, take a hit to its carefully brokered relationship with the resource industries, which had been promised no surprises from a Dix government.

The Liberals continued on Tuesday to exploit that discontent. At a campaign stop in Cranbrook, Ms. Clark toured a steel-fabricating plant as a backdrop to her message that the NDP would put economic development at risk.

It was a chance to build on one of her more successful barbs in the leaders' debate, when she said the NDP "have no problem saying yes to new spending" but keep saying no to development.

"Natural gas is just one of those economic opportunities. As usual they were all over the map yesterday [during the debate] on a two-year moratorium to even extract natural gas in British Columbia from the ground," she said.

Mr. Dix was in Prince George, meanwhile, insisting that an NDP government would say "yes" to mining and natural gas. The Kinder Morgan opposition likely plays well with some voters, but he sought to balance that out Tuesday with a pro-development message.

"I think that there is sometimes a debate in B.C. between the economy and the environment that isn't a helpful one," he told reporters. "I think sometimes people think that British Columbians, because they have concerns about particular projects – for example, the Enbridge Northern Gateway project – that they aren't supportive of economic development. We know this not to be true. … There is also overwhelming support for economic development."

He said an NDP government would reduce the backlog of permits and extend mining tax credits. 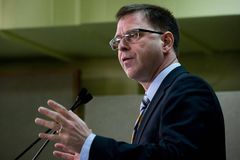 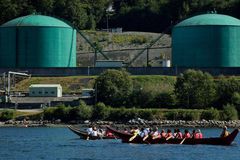 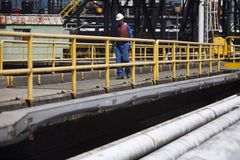 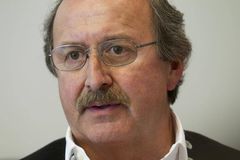 B.C. leaders trade punches in election's only televised debate
May 11, 2018 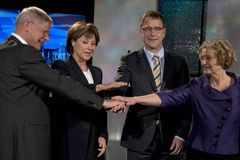 Follow Justine Hunter, Daniel Bitonti and Andrea Woo on Twitter @justine_hunter @danbitonti @andreawoo
Report an error Editorial code of conduct
Due to technical reasons, we have temporarily removed commenting from our articles. We hope to have this fixed soon. Thank you for your patience. If you are looking to give feedback on our new site, please send it along to feedback@globeandmail.com. If you want to write a letter to the editor, please forward to letters@globeandmail.com.
Comments