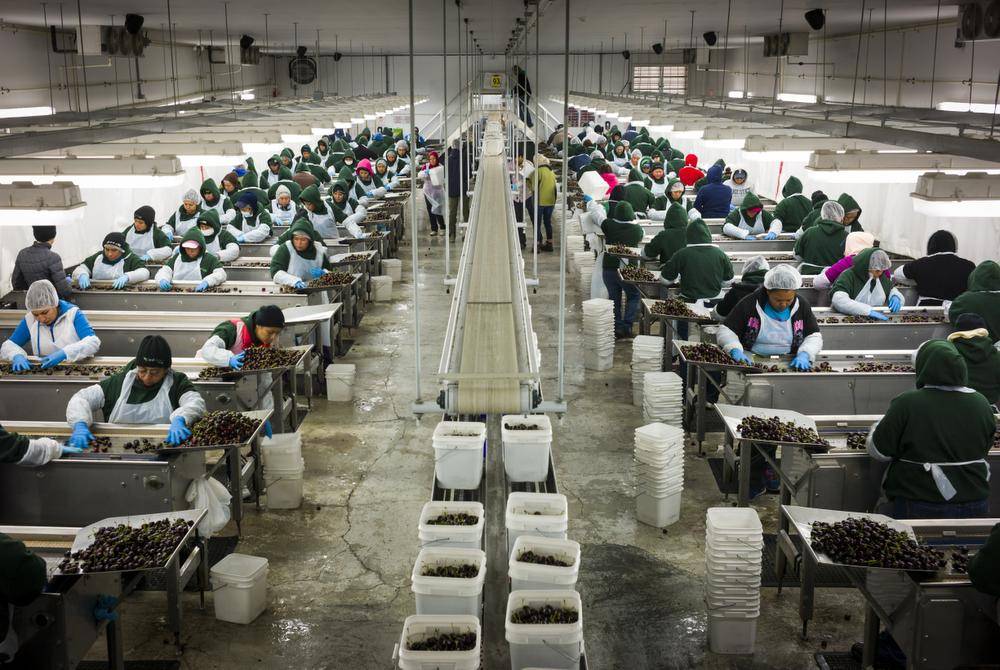 It rained overnight at Cholla Ranch, a former cattle ranch that sits about 580 metres above sea level in the hills above Okanagan Lake and is the highest of the seven sites around Kelowna where David Geen’s Jealous Fruits grows sweet, late-season cherries.

And the forecast calls for more, putting Mr. Geen under pressure to get the fruit off the trees before the cherries are split or bruised.

He has buyers lined up in China, and they pay a premium for uniform, unblemished fruit.

“It [the Chinese market] is 1.4 billion people, of which you have a middle class of 400 million,” Mr. Geen says while showing a visitor around the plant where cherries are cleaned, sorted and packed. “And they have an appetite for cherries … they pretty much buy them eight or nine months of the year – and we are in a nice window where there is not much other supply around.”

The push to get B.C. cherries to China is part of continuing efforts by the Canadian and B.C. governments to gain more access to export markets for Canadian agri-food products, ranging from fruit to beef to shellfish. B.C. blueberry producers hope to be next in line. It is also part of an agricultural evolution in the Okanagan, where some apple orchards have given way to vineyards and others are being replanted with cherry trees. And for Mr. Geen, access to China and its growing middle class is the prime rationale for investing in a labour- and capital-intensive operation that has made Jealous Fruits – owned by him and his wife, Laura – the biggest cherry producer in Canada, with a projected harvest of about 1,600 tonnes.

Efforts to get B.C. cherries to China began around 2008. Growers who had already made inroads into Asian markets, including Hong Kong, began eyeing China as a logical frontier. Besides its huge population and growing middle class, China has an autumn festival in which fruits are often given as gifts – providing an ideal window for B.C. cherries, which are available when cherries grown in California and Washington are past their peak. 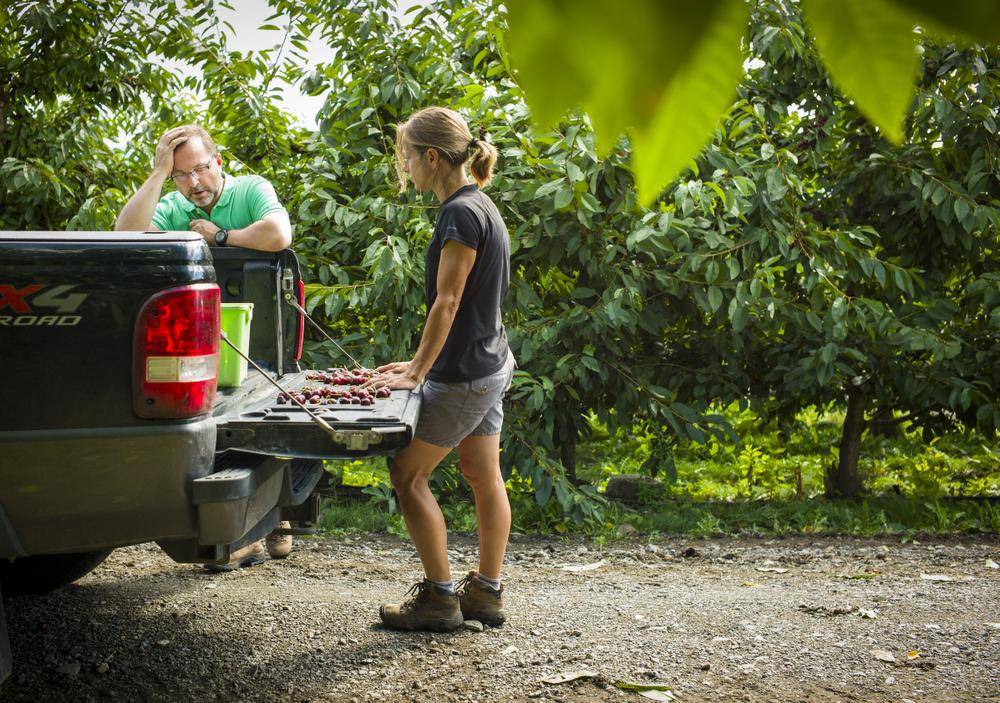 David Geen, the owner of Jealous Fruits, assesses the damage caused by rain and hail from a storm with Gayle Krahn, director of horticulture, at his cherry orchard near Vernon, B.C. (John Lehmann/The Globe and Mail)

B.C. shipped about $4-million worth of cherries to China in 2013 under a pilot program. With full access, announced in June, 2014, growers estimate shipments could increase to $20-million within five years. For the B.C. blueberry sector, access to the Chinese market is projected to be worth $65-million a year.

That amount may seem trifling compared with the value of B.C.’s top export to China – lumber – which accounted for sales of about $1.4-billion last year.

But Chinese exports are a potential bright spot for the Okanagan, where apple producers – still the mainstay of the fruit-growing sector – have struggled with challenges including soaring land prices and competition from producers in China, Chile and New Zealand. 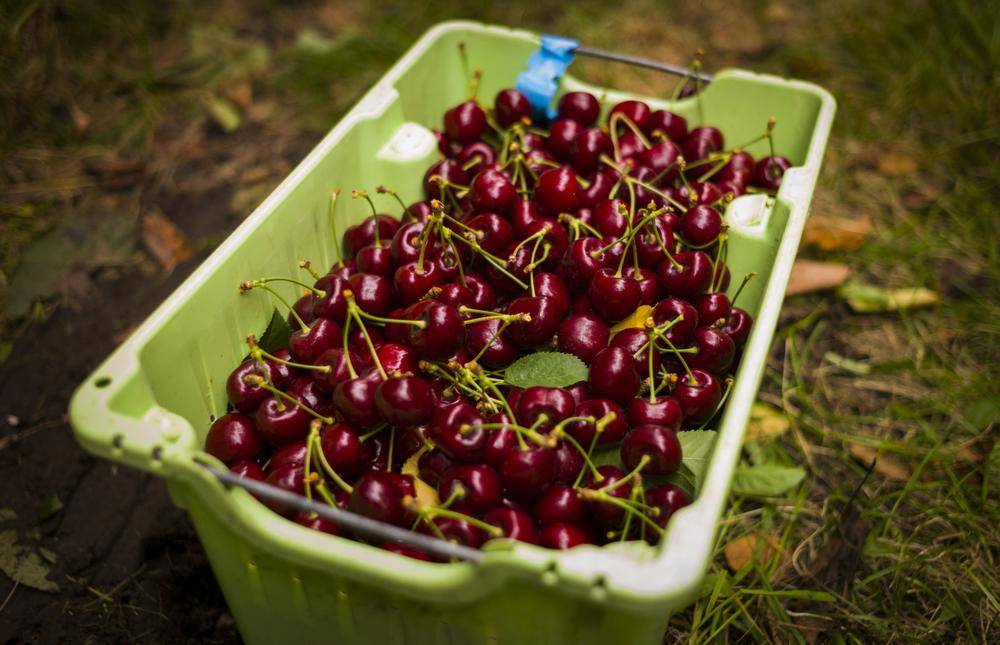 Cherries planted in the Okanagan include Staccato, Satin, Sylvia, Lapins, Sweetheart and Sovereign. Varieties differ in size, texture, colour and flavour and mature at different times in the season.

Late-season Okanagan cherries like those from Jealous Fruits are the latest-ripening cherries in the Northern Hemisphere, coming to market in August or even September. Early season European varieties are typically harvested in April or May.

B.C. cherry growers gained full access to the Chinese market through a 2014 agreement between the Chinese and Canadian governments. Last year, B.C. cherry shipments to China were worth $3.9-million; growers hope that could reach up to $20-million in five years. Blueberry producers are pursuing the same access in hopes of sales up to $65-million a year.

Other countries are also vying for Asian buyers. Australia, for example, wants to boost its cherry exports from a current 20 per cent of production to 50 per cent by 2015.

Each box of cherries that leaves the chilly packing plant at Jealous Fruits is part of a bigger picture. Canadian agriculture and agri-food exports to China increased by 84 per cent in 2012 to $5-billion in 2012, according to a 2014 federal overview of the sector, and China surpassed Japan to become Canada’s second-largest agriculture and agri-food export destination. (The U.S. remains the biggest.)

“We feel that the future growth in the apple sector will also rely on this type of specialization,” Mr. Lucas said in an e-mail. “While B.C. cherry and apple production is important to the provincial economy (about $130-million in wholesale value), we are small in the world scale and must be nimble.”

Mr. Geen, whose great-grandfather started growing fruit in the Okanagan in 1903, grew up in the business and founded Jealous Fruits in 1990 to focus solely on cherries.

He has invested heavily in technology and equipment, including systems to sort cherries by size and colour. When it rains, he sometimes hires helicopters to blow water off the trees. 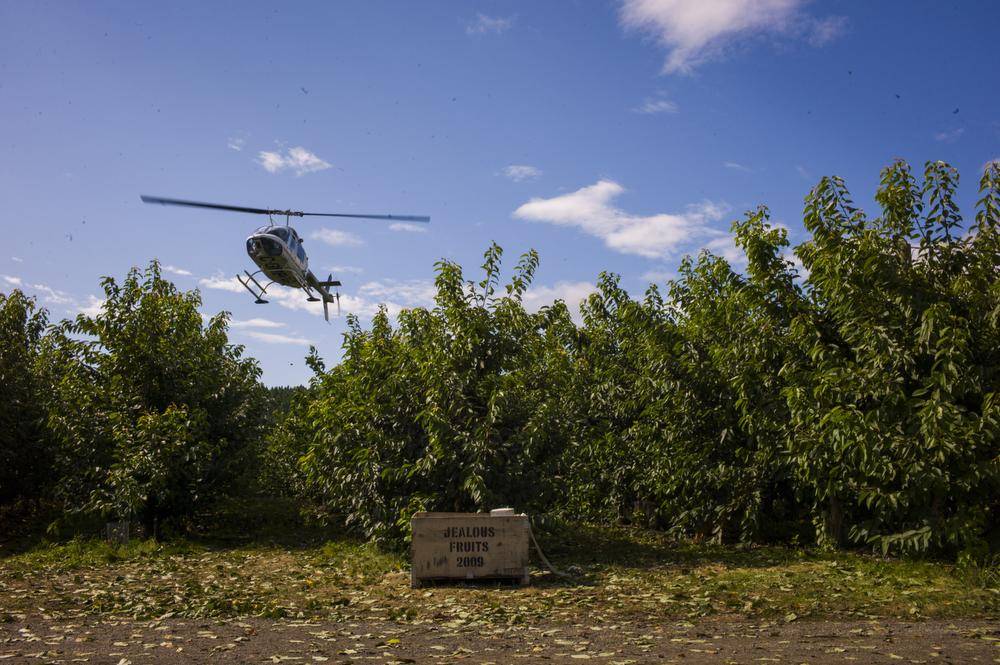 Helicopters are brought in to dry off the cherries after a rain storm at a Jealous Fruits cherry orchard near Vernon, B.C. on August 19, 2014. (John Lehmann/The Globe and Mail)

He also invests heavily in labour. During peak season, Jealous Fruits employs about 600 people, including about 200 Mexican workers hired through Canada’s Seasonal Agricultural Workers’ Program, a federal program launched in the 1960s and extended to B.C. in 2004.

The SAWP program is not without criticism. Labour unions and workers’ advocates say workers in the program are vulnerable to exploitation – especially if they are injured on the job and can face sub-standard working and living conditions.

At Jealous Fruits, foreign workers are housed in trailer-style accommodation that includes dining halls, showers and laundry facilities. The length of stay varies. Men may come for six-month stints in the orchard, while women who work in the packing plant usually come for about six weeks.

Without those Mexican workers, Jealous Fruits would not be viable, Mr. Geen says, adding that before the foreign workers program was available in B.C., he sometimes had to leave fruit to rot because he could not hire enough workers to get it sorted and packed.

Among the cherry trees at Cholla Ranch, there are pickers from countries including New Zealand, the Netherlands and Czech Republic as well as from Kelowna and nearby towns.

Pickers are typically paid by volume. Maxime Giroux, from Val-Morin, Que., is a “high-ball picker,” able to fill up to 60, 9-kilogram totes a day at $5.20 per tote. 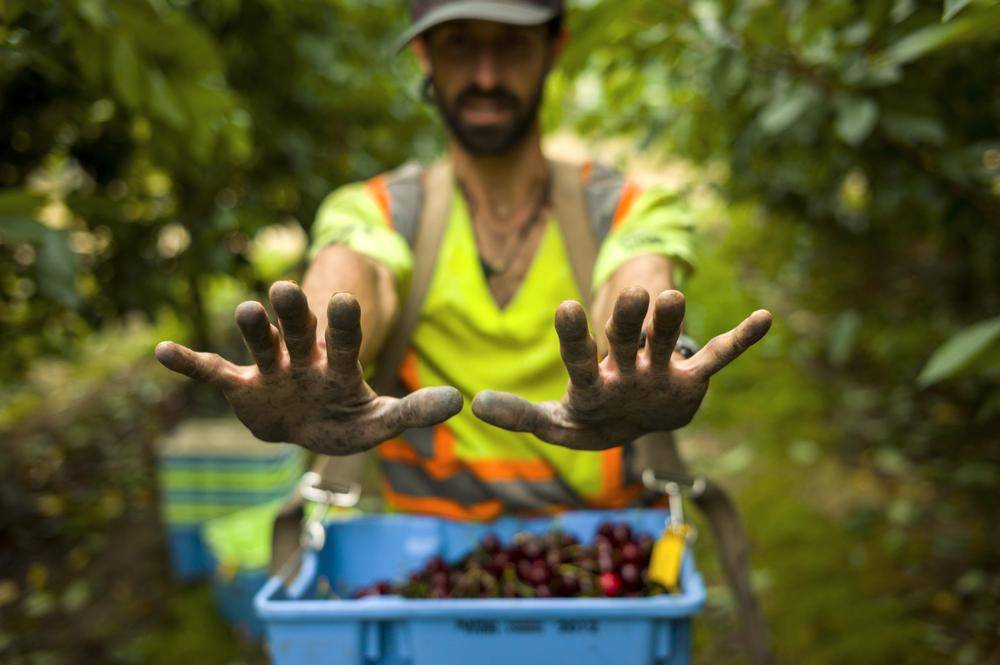 Max Giroux shows off his hands after picking cherries for several weeks at a Jealous Fruits orchard near Vernon, B.C. Giroux has been picking for five year and averages $200 a day in pay. (John Lehmann/The Globe and Mail)

In part, that price reflects food safety concerns in China, says Keith Head, HSBC Professor of Asian Commerce at the Sauder School of Business at the University of British Columbia.

“In China there have been repeated food scares … so for many Chinese consumers, buying long-distance is actually about buying some [product] perceived as safer and more nutritious,” Prof. Head said in an e-mail.

It took years to negotiate issues related to inspection and shipping the fruit, says Christine Dendy, past president of the B.C. Cherry Association and owner of Dendy Orchards, which also exports fruit to China. The Canadian Food Inspection Agency was involved, as were multiple visits by Chinese delegations to the Okanagan. Currently, there are about 100 growers and 17 packing houses registered for the program, Ms. Dendy said.

With the door opened to cherries, B.C. growers are now angling for access to China for blueberries.

“Having gone through this exercise once with cherries, I think it will be an easier path for blueberries,” Ms. Dendy said. “I hope it won’t take quite so long.”