In an increasingly warmer world, probably the last place you would expect to see salmon thriving is in the middle of a desert.

But this fall, a record number of sockeye salmon – more than 300,000 – swam up the Okanagan River, where they will soon start to lay their eggs in a landscape where cactus, rattlesnakes and sagebrush flourish.

The fish reach the heart of the desert, passing through Canada's warmest lake en route, by migrating up the Columbia River before entering the Okanagan River, south of Osoyoos.

For more than a decade, the Okanagan Nation Alliance has been working with tribes in Washington State, the Department of Fisheries and Oceans and the province of British Columbia to restore the Okanagan sockeye run.

And their success has been so remarkable that calling it a miracle in the desert wouldn't be much of a stretch.

"In the mid-nineties, the lowest we saw on the spawning grounds was 1,500 to 2,000 sockeye … and that started the focus on restoration," said Howie Wright, program manager for Okanagan Nation Alliance fisheries department.

"This year has been the highest [sockeye return] on record to the Columbia River. About 615,000 are returning to the Columbia, of which about 85 per cent are coming back to the Okanagan," he said. "What we're expecting is 150,000 to 250,000 on the spawning grounds [just north of Osoyoos] … so we're expecting a pretty good return," said Mr. Wright.

In addition, he expects 15,000 to 40,000 to spawn in the Okanagan River near Penticton and in Skaha Lake, as the sockeye push their range farther up the watershed.

Over the summer, 45,000 to 50,000 sockeye were harvested in native and sport fisheries in Osoyoos Lake, which until recently has been better known as a place to go water skiing than fishing.

This summer, 50 to 70 sports fishing boats could be seen on the lake most mornings.

The Okanagan Nation Alliance – which had "lake to plate in less than 24 hours" as its marketing motto – found a ready local market, with the top chefs at valley wineries vying to outdo each other with fresh, wild salmon offerings.

The Okanagan Nation Alliance brought the sockeye back by restoring habitat in the Okanagan River, improving water management and working with the Colville Confederated Tribes on the U.S. side of the border, who both provided funding for work in Canada and pushed public utilities in Washington and Oregon to release water from dams to benefit migrating salmon.

None of that would have amounted to anything, however, had it not been for the remarkable adaptability of the Okanagan sockeye.

Pacific salmon usually need cold water to survive. In the Fraser River, for example, whenever the temperature climbs above 18 degrees C, fish become increasingly weak and susceptible to die-offs.

But not in the South Okanagan, where the sockeye have demonstrated a heat tolerance that has allowed them to migrate through waters that routinely hit 22 degrees C.

"They are biogenetic powerhouses … they seem to be just at the right body size and fat content to be able to last four months in the Okanagan," said Mr. Wright of the fish, which arrive in July and spawn in October.

This fall, native fisheries managers will be collecting salmon eggs to fill the trays in a new hatchery that opened this weekend on the Penticton Indian Band reserve lands.

The hatchery has the capacity to handle eight million eggs.

Mr. Wright says the plan is to keep building sockeye stocks in the Okanagan lakes, and to restore chinook, coho and steelhead populations, too. Judging by what the Okanagan Nation Alliance has accomplished so far, it looks like this remarkable recovery has just begun. 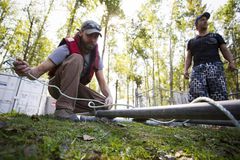 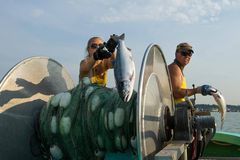 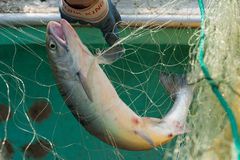