He turned himself in, quickly pleaded guilty, and didn't have a prior criminal record – Emmanuel Alviar thought those factors would keep him out of jail, despite his participation in last June's Stanley Cup riot.

He was wrong. The slight 20-year-old from Surrey was sentenced to one month in custody Monday – a punishment his lawyer said might make other rioters think twice about coming forward to admit guilt.

"Many more might have come forward had they seen that there was going to be just a conditional sentence," Gary Botting told reporters outside Vancouver Provincial Court. "It would seem that from the reasons that the judge gives that it would be now unreasonable for any other judge to give less of a deterrence. A conditional sentence is now pretty well not a possibility."

Game 7 of the Stanley Cup final was coming to a close when Mr. Alviar and four youths headed to downtown Vancouver last June. A riot – the city's second hockey riot in 17 years – broke out after the hometown Canucks were defeated by the Boston Bruins.

Mr. Alviar participated in the riot at three different points. In the first instance, he kicked debris toward a vehicle that had been lit on fire. The debris did not make contact.

Second, Mr. Alviar began pushing a parked vehicle. That led others to join in. Mr. Alviar quickly backed away, but the vehicle would be badly damaged and written off.

In the third instance, Mr. Alviar threw a street barricade at a large window.

Mr. Alviar apologized to the people of Vancouver during a sentencing hearing last month. His lawyer asked the court to issue a conditional sentence, while the Crown sought a four-month jail term.

Judge Reg Harris said the objectives of denunciation and deterrence would not be achieved if Mr. Alviar received a conditional sentence, but four months would have been too severe.

"The need for substantial deterrence is borne out by the size of the riot, the duration of the riot, the harm caused by the riot, and, significantly, this is the second time that Vancouver has experienced a hockey-associated riot," the judge said. "These factors show that there are a large group of persons who are prepared to be involved in a riot, should the opportunity present itself. These persons need to be deterred."

Judge Harris said the sentence would ensure Mr. Alviar's development was not harmed by entrenched criminals, and also send a message to those who engage in public disorder.

Mr. Alviar must serve a 16-month probation term once he's released from custody, and complete 150 hours of community service. He must also write apology letters to the mayor and police chief. He will likely spend three weeks at Fraser Regional Correctional Centre before he's released, Mr. Botting said.

Mr. Alviar – dressed in a black suit – looked stunned when the sentence was delivered. He rubbed his eyes before he was led out of the courtroom in handcuffs. At one point, reporters heard him say, "This is crazy."

Mr. Botting said his client had not believed he would go to jail. Mr. Botting called the sentence fair, but said a conditional sentence would have been more appropriate.

Ms. Hulme said she would not speculate on the effect the sentence would have on other riot cases.

Mr. Alviar was sentenced four days before the one-year anniversary of the riot. He was the second person to be sentenced for their participation.

The first person, Ryan Dickinson, was handed a 17-month sentence in February, minus 3½ months credit for time served. Mr. Dickinson's case, however, was something of an anomaly. Unlikely many of the people charged in the riot, he already had a criminal record for assault.

Meeting with reporters at an unrelated event in Burnaby, Premier Christy Clark said of Mr. Alviar, "It's a good thing he's going to see the inside of a jail cell." 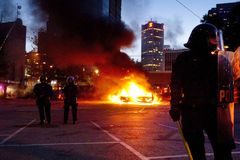 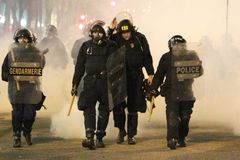 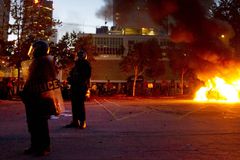 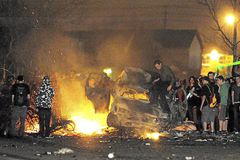 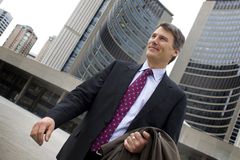