For more than a hundred gamblers who logged on during the first few hours of British Columbia's new online casino, the odds could not have been better. They were able to bet using other people's money.

While it's not clear how many took advantage of the rare opportunity to experience risk-free gambling, the bizarre security breach prompted BC Lottery Corporation to close down the heavily travelled site soon after it opened for business last Thursday.

BCLC initially blamed an overload of gamblers seeking to bet early and often on the much-ballyhooed service for the embarrassing shutdown.

But on Tuesday, the lottery corporation admitted there had been a technological glitch known as a "data crossover."

The security snafu switched some players into other players' accounts while they were on line, allowing them to view sensitive financial information and even use their accounts to gamble.

"Someone could be playing away with [someone else's]money," said BCLC president and CEO Michael Graydon.

A total of about $8,000 had to be redistributed once the errors were discovered and affected individuals tracked down, he said.

As well, bits of the personal data of 12 players were viewed by others, including some numbers on their credit cards, Mr. Graydon said.

"We reacted very quickly and in a transparent way to the customers involved, and we will make sure this does not happen again," he vowed.

"We are one of the first jurisdictions in the world to do this. ... It's a new frontier, and technology is changing very rapidly."

Although online security breaches do happen, B.C. Privacy Commissioner Elizabeth Denham said she had never heard of one like this. "But people are living their lives online, and there are risks."

She said her office is working closely with the BCLC to ensure safeguards are in place before the site is re-opened.

"We are always concerned when sensitive information is put at risk. ... It's scary."

Online privacy expert Michael Geist of the University of Ottawa said such incidents "hammer home" the need for mandatory disclosure of all Internet security breaches.

"The frailty of personal data uploaded to hundreds of thousands of different websites is an ongoing issue, and clearly there are some real problems," he said.

It was a rough day for the lottery corporation on another front, too.

Reports surfaced of more than $600,000 in fines levied against BCLC by the federal Financial Transactions and Reports Analysis Centre (FINTRAC), which monitors heavy gambling and possible money laundering.

FINTRAC imposed the sanctions because of improper reporting by B.C. Lottery officials.

Mr. Graydon said the corporation is appealing the penalties.

"A number of files we submitted were rejected by FINTRAC and returned to us," he said. "By the time we sent them back, they were past the reporting dates."

He said several hundred files also contained clerical errors. "We fixed them, but it was too late."

"When you have sizable fines being administered, there is no doubt that is being looked at. ... Gaming is a legitimate activity and we expect those providing it to abide by the law."

NDP opposition critic Shane Simpson said the fines, the online gambling breakdown and the delay in reporting the real reason for the glitch to the public indicate big problems at the lottery corporation.

"What on earth is going on there? This is a corporation that is pretty good at making money, but not much good at other aspects of the job," said Mr. Simpson.

"We are talking about a corporation that is simply not managing its files well."

Meanwhile, not all was bad news for those online gamblers whose accounts were inadvertently pilfered. Some of their money ended up winning, and those sums were added to their accounts. 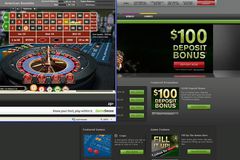