A moment can change everything. So can serendipity, circumstances, luck – where you are, who you're with, whether you remembered to load batteries into your camera. Everything changed for Paul Watson, with ramifications shooting far beyond his own life, when he photographed a horrific scene in Somalia in 1993: the corpse of a U.S. soldier being dragged through the streets of Mogadishu by a gleeful mob. Mr. Watson won much acclaim – and the Pulitzer Prize – for that photo, with which you are probably familiar. But Mr. Watson, a Toronto Star journalist who lives in Vancouver, remains haunted by it.

In 2007, he published a memoir, Where War Lives. With brutal honesty and intensity, he recounted that moment – how, before he snapped the photograph, everything went quiet and he heard a voice: "If you do this, I will own you forever." He took the picture.

Mr. Watson was interviewed about the book on NPR. At Princeton, writer Dan O'Brien was listening to the radio, packing up his apartment after a fellowship trying to write a play about ghosts. Hearing that interview changed his life. Mr. Watson's, too.

Mr. O'Brien, who found "the music of [Mr. Watson's] voice haunted and haunting," reached out to the Canadian photojournalist, and the two have formed an exceptional, if curious, creative partnership. Mr. O'Brien has channelled Mr. Watson to create three works of art (so far). His chamber opera The War Reporter has its New York premiere on Saturday at the Prototype Festival. His play The Body of An American has its British premiere next week at London's Gate Theatre. A book of poetry, War Reporter, was published last year, and was very well reviewed.

"It's been the most meaningful artistic experience of my life. It's changed how I've written; to whatever degree it can, it's changed me personally in a lot of ways," says Mr. O'Brien, 40, who has come to think of all the work as The Paul Watson Project. "Now I feel like somebody like Paul is the only thing worth writing about. It's hard for me to go back to writing about sunsets and blue jays."

Mr. Watson, for all his accomplishments, is exceedingly modest – and fragile, still, after all he has seen. He describes panicking, not being able to breathe, during the world premiere of The War Reporter at Stanford last April. Even in conversation, there are trigger words that cause Mr. Watson to break down.

"It's deeply painful. I don't like talking about this. It's very easy for me to put it in a dark part of my mind and leave it there, and then I feel better," explains Mr. Watson, 54, who has suffered from post-traumatic stress disorder. "But it keeps coming back. And people, very good people, keep finding something in it that's important to tell other people. So I can't get in the way of that."

In 2010, after being in touch by e-mail, Mr. O'Brien, who now lives in Los Angeles, flew to the Northwest Territories, where he and Mr. Watson holed up in a hotel in Ulukhaktok (Mr. Watson covers the Arctic for The Star). These interviews, along with Mr. Watson's writing, provide the main source material for Mr. O'Brien's play, opera and poetry.

The War Reporter is a multimedia work, one of two chamber operas by Mr. O'Brien and composer Jonathan Berger (performed together as Visitations: Theotokia and The War Reporter). Both examine the phenomenon of auditory hallucinations, about which Prof. Berger – a professor at Stanford University with an interest in music and the brain – speaks with authority. The opera opens with a soundscape – cameras, guns, a helicopter. The "if you do this, I will own you forever" voice Mr. Watson heard becomes a rhythmic motif that repeats.

"Ultimately, the piece really wrote itself," Prof. Berger says. "It was one of the most remarkable composing experiences I've had. It just sort of happened."

The Body of an American is a work of documentary theatre that has two actors taking on some 30 roles, primarily characters named Paul Watson and Dan O'Brien. It premiered in Portland in 2012, and has won several awards, including the inaugural Edward M. Kennedy Prize for Drama and the 2013 PEN Award for Drama.

Neither work has yet been presented in Canada.

Mr. Watson's life and the horrors he has seen make for a compelling story, to be sure. But all three of these men feel a more urgent social responsibility in telling the story.

"It sounds naïve, but I honestly think if more people confront what war does to ordinary people, then more people will want to stop it," Mr. Watson says from the Vancouver airport on his way to New York for Prototype. "And that's not a crusade. That's just a point of view that I'm an ordinary person and the things that I've seen are happening to millions of people in our world today, and yet we continue to make heroes out of soldiers and the people who wage war, and they aren't. We at some point in our history, our advancement, have to find a way to stop this because it is toxic and corrosive … and I'm just convinced if you tell ordinary people what ordinary people suffer in these places, that they will want to do the right thing and stop it." 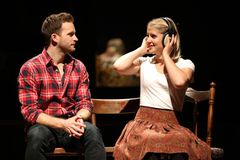 Donation of $2-million to York Theatre rests on fate of exterior sign
January 8, 2014 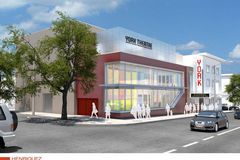 Theatre Review
Uncle Vanya: Play stays with you beyond the intimacy of the theatre
January 8, 2014 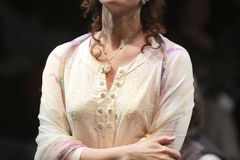