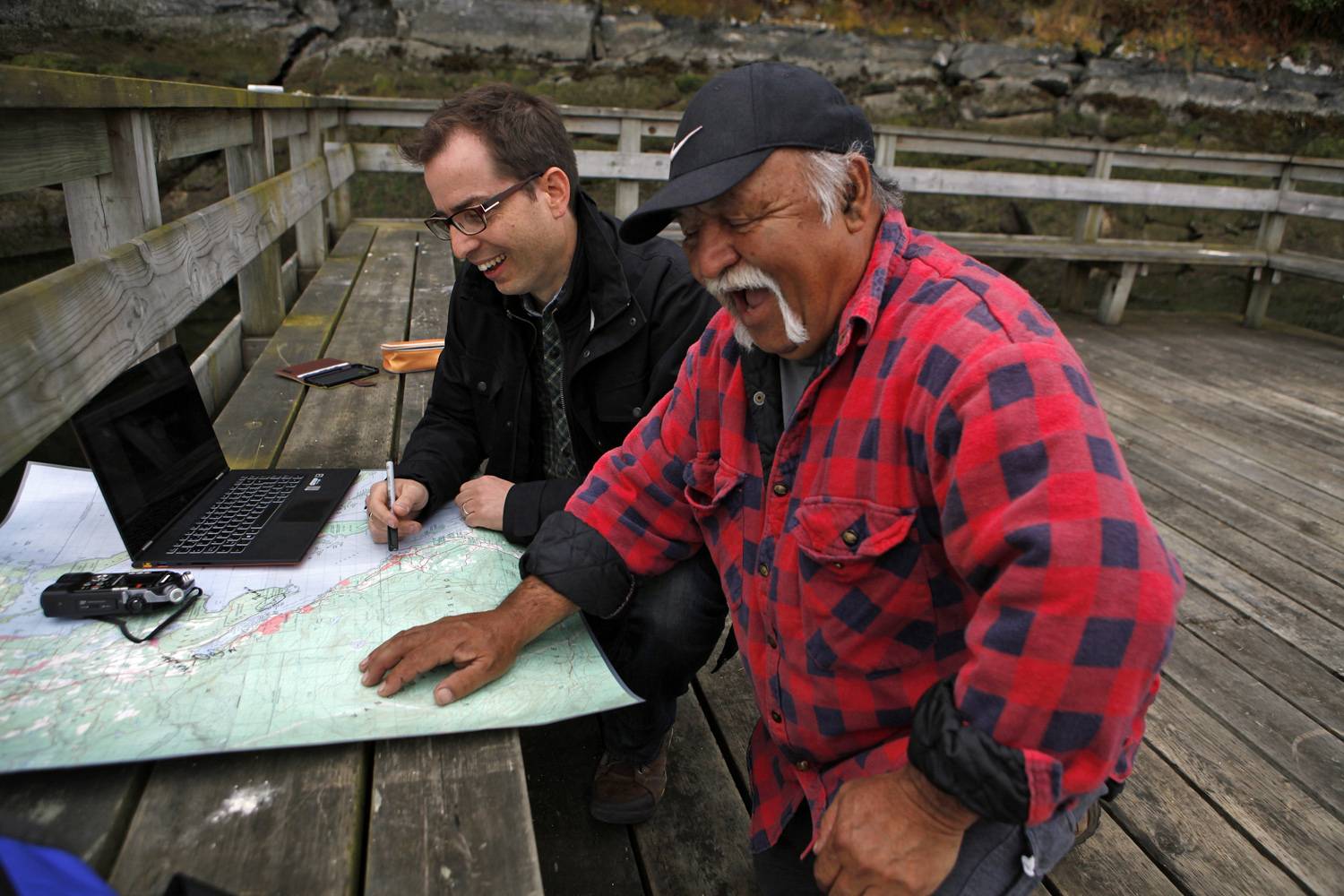 Dr. Brian Thom, UVic anthropologist and key indigenous leader with Google Earth Outreach, speaks with Stz'uminus First Nation elder Ray Harris near Ladysmith, B.C., on May 29, 2014, about how they can map their territories using Google Earth. (Chad Hipolito for The Globe and Mail)

As a commercial fisherman and an elder in the Stz’uminus First Nation, Ray Harris has long been a guardian of secrets. Neither his favourite fishing spots nor the oral history of sacred spaces around his community on Vancouver Island’s east coast have been easily pried from him.

But he is now telling tales in the most irretrievably public way, contributing to an indigenous mapping project that imbeds his culture into the digital expanse of Google Earth.

Cruising in his 37-foot gillnetter, Bearcat, across Kulleet Bay, Mr. Harris points out some boulders, glacial erratics that rest on the shore. One features a petroglyph of a fierce sea wolf – a reminder of times of war along the coast for the Stz’uminus people.

“It was the only sentry we needed. You couldn’t make an approach to Kulleet Bay or Shell Beach, without that rock seeing whoever was coming,” he explained. Anthropologist Brian Thom sits at his side, recording the story over the thrum of the Bearcat’s engine and marking the locations on his laptop.

With these stories, Mr. Harris, a former chief of the Stz’uminus First Nation, is helping to redraw the map, with the assistance of anthropologists from the University of Victoria, led by Mr. Thom, and backed by the California tech giant, Google.

The project allows Mr. Harris to connect with aboriginal youth, who will be able to access traditional history and remain connected to their Hul’qumi’num language on smart phones and laptops. He hopes it will break down barriers that exist between his community and his non-aboriginal neighbours. Plus, there is an equally important utility: The technology will be used in the pursuit of a treaty – an unresolved land claim that goes back generations, when the first British colliers settled on the banks of what is now called Ladysmith to mine the region’s rich coal seams.

From the deck of the Bearcat, Mr. Harris points out the Thuq’mi’n village, where he grew up and played in longhouses that were built from massive old-growth trees. The name describes a man fishing with a spear. The community today still thrives on a rich table of seafood – herring and salmon, crab and butterclams, geoduck and mussels.

Other village sites, however, have been wiped out. Mr. Harris believes longhouses were torn down to make picnic tables – archive photos from the 1920s show Ladysmith residents in their Sunday best enjoying the beach, a short boat ride from their settlement.

“It was an escape from the coal mines. Coal mine days, they come over here. But we had longhouses here,” he said, pointing to Shell Beach. “There were efforts to get this land out of reserve to give it to the town.”

At Sibell Bay, near his waterfront home, a recent discovery offers a hint of how long his people have lived on these shores.

“Right there, right beside that big tree there was a dig, an archaeological dig... And two hearths were found, rock work as intricate as any rock work in the world. One was an oven, and the carbon dating tested on there was 7,000 years and better. We’ve been here forever.”

I have been fishing all my life, I’ve never recorded anything, I know the whole coast. And I have a hankering now to record stuff, for my kids and my grandkids.
Ray Harris, Stz'uminus elder

The indigenous mapping project got its start in 2007 with the arrival at Google’s California headquarters of a Brazilian tribal leader. Rebecca Moore, director of Google Earth Outreach, vividly remembers the moment when Chief Almir, dressed in the colourful feathered headgear of the Surui people, met her at the campus.

His tribe made contact with the modern world in the 1960s when a highway was built through its main village. Half a century later, the Surui were close to bring wiped out as a result of disease and conflict. “His territory was under threat,” Ms. Moore said in an interview. “So he came to Google headquarters to help put the Surui tribe on the map.”

His proposal for a partnership, to use Google Earth to share his tribe’s story and help combat illegal logging, has spawned a cultural mapping program that has now reached 60 countries, with more than 400 indigenous people getting training from Google on how to take part. Nunavut’s Inuit have shaped the Google street views of Cambridge Bay.

“Our goal was democratize access to the kinds of technology we have, to put them in the hands of indigenous people,” Ms. Moore said in an interview. When she went to visit Chief Almir’s home, her team handed out Google phones to help document what was happening. It is a powerful weapon – now the public can virtually stand on a mountaintop and see the clearcut logging in the Amazon jungle. The Surui have since negotiated the sale of carbon credits for their forests.

“These are not Google’s issues, they are between the local people and their local government. But our goal would be to provide the tools and data so everyone has better information and justice can be done,” Ms. Moore said. “The start for us was the cultural mapping, but we came to understand that the culture is under threat is if the land is under threat.

The Supreme Court of Canada’s Tsilhqot’in landmark decision earlier this month, which recognized aboriginal title over traditional lands, has given Mr. Thom’s project heightened significance. On lands where aboriginal people can prove their title, resource companies and others who want to benefit from those lands will require more than the consultation process they’ve needed in the past. Instead, they’ll need First Nations consent in all but exceptional circumstances.

“Mapping projects like these will make the difference between consultation and consent,” Mr. Thom said. “The evidence that speaks most plainly to the court’s tests for aboriginal title will be represented in sophisticated maps crafted from traditional knowlege and indigenous experience of the land.”

The Stz'uminus Storied Places Project by the Stz'uminus First Nation and the University of Victoria Department of Anthropology includes this map, which plots places of traditional importance and uses names in the Hul'q'umi'num' language. Click through to hear pronunciations and see oral history videos.

People of the Stz'uminus First Nation dig for clams along the beach off the Salish Sea near Ladysmith, B.C., on May 29, 2014. (Chad Hipolito for The Globe and Mail)

There are multiple layers to the project on B.C.’s west coast, and not all of it is for public consumption. Part of the work is to incorporate into Google Earth and Google Maps the place names in the Hul’qumi’num language, and links that will explain their culture.

Other places and names are held back for cultural or strategic reasons. For example, the precise location of the sea wolf petroglyph is mapped using Google’s software, but that will not appear on a street view, in a bid to keep curiosity-seekers at bay.

“Google is great and it is wonderful to share, but not everything,” said Mr. Thom. He has been involved in mapping work for treaty negotiations for 13 years, helping establish the boundaries of traditional territories. But it was a costly, technical process. He approached Google because what they offer is so much more accessible.

There are no clear rules about what stories are taboo to share. It will be an evolution. Robert Morales is the chief negotiator for the Hul’qumi’num Treaty Group, which includes the Stz'uminus, and he has a keen interest in the mapping project as a tool to assert their territorial claims. It is an effective way to present, in treaty talks or in court, just where culturally important sites are and to capture oral histories.

“Indigenous places are important in the work we are doing in treaty negotiations,” he said. “It preserves that history, the work that Brian is doing, to preserve those names and stories is really important to keep that memory, and with all the technology it is easier to do that.”

Mr. Thom has set up aboriginal youth with video cameras to speak with elders, with the goal of linking them to the online map. But he said it is not clear how far it will go – elders like Mr. Harris will shape that.

“There are cultural laws but there are different interpretations of those laws. So these kinds of projects always tread in interesting territory. There are some who don’t agree with what is put out there. It’s not cut-and-dry.”

On an overcast day, Mr. Harris is in a chatty mood.

“I have been fishing all my life, I’ve never recorded anything, I know the whole coast. And I have a hankering now to record stuff, for my kids and my grandkids.”

As the Bearcat pulls past Sturgeon Point, he explains a purification rite designed to protect villagers on their travels on the beaches of a small bay.

“This is one of the sacred-est places,” he said. Before leaving on a journey, the Stz'uminus would collect a type of reed growing along the beach. “You took it and crumpled it up, put it in the water and scrunched it up, it foamed like a soap. So the men would wash themselves, clean themselves, and then they’d wash their canoes, so that no harm would follow them for the season.”

Still today, members of canoe racing teams will take part in the ritual at sunrise. “Before every trip we go to compete, we came here,” he said.

“But that’s getting lost. The story I’m telling you is only known to not many people left. Like my kids, when I explain it to my kids, they say, ‘Really, Dad?’ You know, like it’s just, because we’re not on the water as much as we used to be.”

The Stz’uminus want to preserve their culture and their way of life, and he hopes that sharing these stories will help open up a better understanding that can improve relations with his neighbours, and resolve conflicts over dwindling resources. The herring and Chum salmon runs that could sustain a family for months have diminished. There is a battle over rights to the lucrative geoduck fishery which is harvested by commercial fishermen right in front of their reserve.

“So I hope that that kind of story gets out. We’re not asking for anything that isn’t ours. It’s actually a wonderful way of life we’re craving for.”

Below, we have embedded a map of the boat tour The Globe and Mail took with Mr. Harris and Mr. Thom, as recorded by Mr. Thom and his team.