The death of an endangered killer whale found off the coast of British Columbia was not likely caused by another whale, according to an expert, leaving open the possibility the animal was struck by a ship at sea.

"These whales do exhibit aggressive behaviour with one another but it's very minimal," said Washington's Center for Whale Research director Deborah Giles. "And it's generally done in play or social behaviour. [The whale] doesn't have any other bite marks or scratch marks that I can tell from the photo."

The 18-year-old male orca, known as J34, was found dead last Tuesday off the Sunshine Coast, north of Vancouver. The animal was part of the endangered southern resident killer whale population, which live in the waters off southern B.C. and Washington state. The group's population is now 79, down from 88 in 2005.

A necropsy determined the whale died of blunt-force trauma to its head and neck, but officials with the federal Fisheries Department have been careful not to speculate about what caused the animal's injuries – specifically if it was caused by a vessel.

The fate of killer whales in the Pacific Northwest region of B.C. and Washington State has become a central issue in the debate about the Kinder Morgan pipeline expansion from Alberta to B.C.

The federal government approved the project last month, but environmentalists and others have said the increased tanker traffic associated with the pipeline would put whales in serious danger, either from ship strikes or because the ships' noise will disrupt the whales' ability to track prey and communicate. Environmental groups filed a lawsuit last week challenging the federal approval of the pipeline because, they argue, the government did not adequately consider the impact on the whales.

The necropsy showed the orca was in overall good condition with a thick layer of blubber, which is the fat marine mammals use to insulate and store energy. The whale also had a hematoma, indicating it was alive for a time after the injury.

Ms. Giles also said southern resident killer whales are going through long periods of malnutrition because of the lack of salmon in the region.

"Southern resident killer whales are very picky eaters. They only eat salmon and they preferentially eat chinook salmon. And all salmon species are just a fraction of what they used to be in the past. We know there's not enough fish in the water to grow the population, so these whales end up being nutritionally deficient during pregnancy and after pregnancy."

The number of tankers with crude oil sailing from the pipeline terminal into Juan de Fuca Strait will increase from approximately five a month to 34, in 2019, when the project is expected to be completed.

"Our entire ecosystem in the Salish Sea would be disrupted and potentially catastrophically destructive," she said.

For Living Oceans executive director, Karen Wristen, new developments in the Salish Sea, such as the extension of the Kinder Morgan pipeline, are a threat to the southern resident killer whales.

"The population viability study that we've done on it suggests that any further disturbance could lead to extinction," Ms. Wristen said.

Her organization and the Raincoast Conservation Foundation have applied for a judicial review of the NEB's report recommending approval of the pipeline expansion. They've also filed a new request asking the court to satisfy the cabinet's decision to accept that report.

"When a species is designated endangered, as the southern resident killer whales have been, you must take action to protect their habitat and to create an action plan that will encourage the recovery. You cannot approve projects that will endanger them further… That's contrary to law." 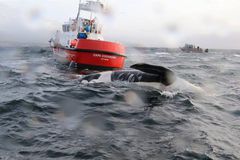 Killer whales pose newest hurdle for Trans Mountain pipeline
December 21, 2016
A pipeline primer comparing British Columbia’s north and south coasts
December 7, 2016
Follow us on Twitter @GlobeBC Opens in a new window
Report an error Editorial code of conduct
Due to technical reasons, we have temporarily removed commenting from our articles. We hope to have this fixed soon. Thank you for your patience. If you are looking to give feedback on our new site, please send it along to feedback@globeandmail.com. If you want to write a letter to the editor, please forward to letters@globeandmail.com.
Comments