The Vancouver Aquarium is weighing its options, including possible legal action, in response to a controversial ban on whales, dolphins and porpoises in city parks.

And plans for construction that was to begin in September have come to a screeching halt as the aquarium plans its next move and potential future.

"We're trying to understand all the potential impacts, step one, and then step two, say what are our options," president John Nightingale said on Tuesday.

Those impacts include capital spending – work was to begin on new pools in September – potential visitor and revenue impacts from not having cetacean exhibits and the fate of five whales currently on loan to facilities in the United States.

"Then step three is, what do we do about it – all options are open, until we understand this."

The aquarium has previously turned to the courts, in 2014, seeking to have a proposed breeding ban overturned. That court action was put on hold when the proposed ban was shelved following a municipal election that changed the makeup of the park board.

But even as the aquarium vowed to keep up the fight, supporters of the ban hailed it as long overdue and called on the aquarium to find new ways to meet its conservation goals.

"These are not healthy environments."

The Park Board voted 6-1 in favour of a bylaw that bans whales, dolphins and porpoises in captivity. The new bylaw goes into effect immediately.

The aquarium's three cetaceans – a false killer whale, a harbour porpoise and a Pacific white-sided dolphin – will be allowed to stay, but the bylaw means they can't be used in shows.

An American whale specialist said he was disappointed by the development.

"Having a safe place and talented people to [rehabilitate] marine animals is a real contribution to their welfare and allows some access by scientists to better understand the animals they care about passionately," Bruce Mate, director of Oregon State University's Marine Mammal Institute, said Tuesday in an e-mail.

"I hope their board will reconsider the rehabilitation services they render to otherwise doomed animals, even if they cannot return most to the wild," Dr. Mate said.

Erin Shum, a Park Board commissioner who voted against the ban, is also worried by potential impact on rescue and rehabilitation.

"What will happen to these animals, long term, if they don't have a home? … If they can't be released, where will they stay?" she asked.

She said she was also concerned by potential costs to the city – and by extension, to taxpayers – of a legal battle.

Because of its location in Stanley Park, the aquarium falls under Park Board oversight.

Its current lease with the Park Board runs to 2029.

In February, the aquarium announced plans to bring back some of the belugas currently loaned to other facilities, saying those would be non-breeding and that the beluga display would end by 2029 – when its lease expires.

Two beluga whales, a mother and calf, died nine days apart last November. Qila was the first beluga whale born in captivity in Canada and was 21 when it died; its mother, Aurora, 30, died nine months later.

In April, the aquarium said a five-month investigation concluded both animals died as a result of an unidentified toxin "likely introduced by food, water, or through human interference."

The aquarium said it was taking several measures to guard against animals being exposed to toxins, including replacing water-treatment systems, improving feed screening procedures and updating security.

The full report was not released.

The controversy over whales in captivity is also a federal issue.

Bill S-203, the Ending the Captivity of Whales and Dolphins Act, is currently in Senate committee hearings. The bill was introduced in 2015 by now-retired Nova Scotia senator Wilfred Moore and is backed by Green Party Leader Elizabeth May.

If the legislation makes it through the Senate, it would then go to the House of Commons. 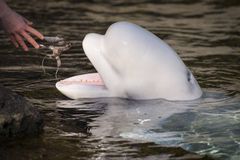