More than half the medical-marijuana patients in a new study said they use cannabis to help them get off heavier prescription drugs, with the largest percentage saying pot acts as a substitute painkiller for opioids.

The new research, published in the peer-reviewed International Journal of Drug Policy but funded by a licensed cannabis grower Tilray, adds to a small body of science that suggests patients are effectively using marijuana to replace opioids, a class of legal and illicit painkillers that has led to an ongoing crisis that killed hundreds of Canadians last year.

The study of 271 Tilray patients found 53 per cent were using the drug for pain, with the next most common reason being the treatment of mental-health issues, such as eating disorders or post-traumatic stress disorder, at 15 per cent. Of those who claimed they had dropped pharmaceutical drugs for cannabis, 32 per cent switched from opioids; 16 per cent from benzodiazepines and 12 per cent from anti-depressants.

Co-author Zach Walsh, a clinical psychologist and cannabis researcher at the University of British Columbia, said the new paper proves further studies are needed to investigate how well cannabis stacks up against opioids in reducing pain.

"It doesn't surprise me, given our increasing recognition of some of the problems with opioids," Dr. Walsh said of the results from the 107-question online survey that was conducted last summer. "Now the truth is coming out and people are looking for other alternatives."

The majority of patients who said they had replaced opioids or tranquillizers said the main reason for their switch was because cannabis had less problematic side effects, Dr. Walsh said.

Philippe Lucas, head of patient services at Nanaimo-based grower Tilray, was co-author of the study.

Last November, Dr. Walsh and a team of five other researchers from the University of British Columbia and two American institutions reviewed all studies involving mental health and marijuana published since 1960, and found a pronounced link between opioids and cannabis.

Last year, The Globe and Mail found fewer Canadian veterans have sought prescription opioids and tranquillizers in recent years, while at the same time, prescriptions for medical marijuana have skyrocketed.

It is not clear whether the two are related, but the trend echoes what researchers have found in U.S. states with medical-marijuana laws, where significant declines in opioid overdoses suggest that people may be substituting these oft-abused medicines with cannabis.

A handful of licensed growers have funded trials to make a stronger case for using cannabis to treat a variety of ailments, but Canada's medical establishment is weary to endorse the drug because of the dearth of clinical evidence.

But, the fact that the new study was peer reviewed somewhat balances off any potential conflict of interest on the part of Tilray, which has a financial stake in the topic, he added.

"I would still like to see more studies by independent investigators," said Mr. Caplan, head of medical ethics at New York University's school of medicine.

"Still, bottom line, better something [from Canada's licensed growers] than nothing."

Mr. Caplan said Ottawa should step up to fund studies looking into the benefits of cannabis.

The federal government is expected to announce new forms of such funding once it rolls out legislation this spring legalizing the recreational sale of cannabis.

Addictions experts have called on the government to both study the dangers associated with the drug, such as impaired driving and more young people using it, but also pot's potential public-health benefits, such as people substituting cannabis for alcohol or opioids. 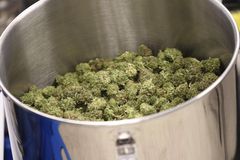 Vancouver slowly but surely shutting down rogue pot shops
February 7, 2017
Follow Mike Hager on Twitter @MikePHager
Report an error Editorial code of conduct
Due to technical reasons, we have temporarily removed commenting from our articles. We hope to have this fixed soon. Thank you for your patience. If you are looking to give feedback on our new site, please send it along to feedback@globeandmail.com. If you want to write a letter to the editor, please forward to letters@globeandmail.com.
Comments