It was part of Kwok Chan's weekly routine to walk the block from his house to Main Street and take the bus downtown to meet other retired friends at the Floata Restaurant in Chinatown.

Last Wednesday, Mr. Chan, 80, left just before 7:30 a.m. for his usual outing. But he was hit and knocked down by a cyclist near his bus stop and died early the next morning in what police and B.C. injury-prevention unit say is the first known fatal cyclist-pedestrian collision in the Vancouver region.

Members of Mr. Chan's family say that police have not yet told them exactly how the accident happened. But what they have heard secondhand is disturbing.

"All I know is what I was told when I went to VGH, I was told by a nurse that … it was a cyclist going at high speed, going 50 kilometres an hour," said George Chan, one of Kwok Chan's five children.

Mr. Chan, a mortgage officer at Scotiabank who lives with his parents in their house on East 20th, said the family is in shock about the accident and desperate to find out more.

"I don't want to say who is right or not right," said Mr. Chan, who contacted The Globe and Mail on the weekend trying to get help in finding more information. "But maybe speeding is an issue."

VPD spokesman Constable Lindsey Houghton said he has never heard of a similar incident in Vancouver. Nor had RCMP spokesman Cpl. Peter Thiessen heard of anything similar in the whole region.

There have been rare cases of pedestrians being killed or seriously injured pedestrians in crashes with cyclists in larger cities, especially in New York in the 1980s when bicycle couriers became more numerous.

The most famous case in Canada is of CBC producer Joan Donaldson, who was hit by a cyclist in Montreal in 1990. She remained in a coma until she died in 2006. A Toronto woman died after being hit by a 15-year-old who was riding his bike on a sidewalk last year, which prompted a call for bike licensing in the city.

The B.C. Injury Research and Prevention Unit says that about 10 pedestrians a year are injured seriously enough by cyclists that they have to be taken to hospital, but the unit's records, which go back to 2001, show no deaths.

According to the little information the Chan family has been able to gather, Kwok Chan was hit as he was crossing Main Street from west to east to get to the bus stop that would take him downtown. Although he was knocked to the ground and hit his head, he appeared to be all right at first.

Mr. Chan died apparently because of bleeding in the brain caused by a skull fracture. The Chan family went to the police station as soon as it opened to let police know and to try to get more information.

They say they were told police would put out a news release, but that didn't happen because the officer who would do it wasn't on duty. They also could not get any information about what actually happened, which upset many of them.

Vancouver police issued a news release early Monday morning, after The Globe and Mail asked for details about the incident. Constable Houghton said it had been delayed because he was off, as was the officer investigating the crash. He also said he couldn't give more details about the crash because of the ongoing investigation.

But the family members say the news release has confused them even more.

The release said Mr. Chan was hit at 6:30 a.m., but he didn't leave the house until almost 7:30. It says he was crossing the street "mid-block" when he was hit by a northbound cyclist and that he was just stepping out into traffic when he was hit.

Family members said that this part of Main has a pedestrian-controlled crosswalk mid-block because of a jog in the street alignment of 20th, and that their father would never have jaywalked.

"My father-in-law was always active," said Mr. Chee. "He enjoys going down to Chinatown to meet his friends over breakfast. Of course, being active does not mean he can run the four-minute mile. As well, he is always cautious and would have crossed at the signals."

As well, if the cyclist was northbound, he would not have hit Mr. Chan as he was stepping out into traffic unless the cyclist was riding on the wrong side of the road. Mr. Chan would have been just finishing his trip across the street. 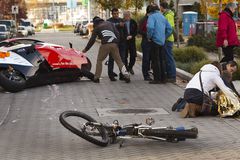 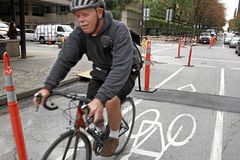 In Vancouver, beware of cars; in Toronto, watch for streetcar tracks
May 31, 2010 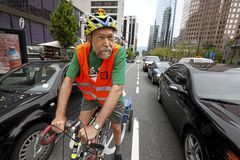