After spending a night in jail following a domestic dispute with his wife, Pat Pimm has resigned as member of the B.C. Liberal caucus but signalled his intent to keep his seat as an Independent MLA.

Mr. Pimm, who was elected Liberal MLA for Peace River North in 2009, issued a short written statement on Monday after calling the Liberal caucus chairmain when he was released from Fort. St John RCMP cells.

RCMP spokesman Corporal Dan Moskaluk said no charges had been laid as of Monday.

If police do recommend charges, a special prosecutor would be assigned to handle the case because of Mr. Pimm's status as an elected official. Independent prosecutors are assigned in such high-profile circumstances to review evidence, determine if charges are warranted and then handle any prosecution.

"Last night, I was involved in a dispute with my wife that led to police involvement, and I was held in custody overnight," Mr. Pimm stated in the release, issued by the B.C. Liberal caucus. "I have decided to take a leave from caucus and resign my parliamentary secretary post effective immediately. It's time for me to work on family and personal issues."

Liberal caucus chairman Ron Cantelon said Mr. Pimm volunteered to resign, but emphasized it is not a leave of absence.

"Domestic disputes are taken very seriously," he said. "He resigned from caucus and will sit as an Independent." He said it was approved by the caucus executive. "It's in his best interests," Mr. Cantelon added.

Mr. Pimm's resignation was handled by the caucus executive, and the whole caucus has not met to discuss it, he said. "We're all surprised by it, shocked by it."

The B.C. Liberal government is preparing for an election as early as this fall. It means the party is spending the summer fundraising and selecting candidates, so Mr. Pimm could face a nomination challenge within weeks.

Although he has had a low profile since he came to Victoria in 2009, Mr. Pimm did express a strong law-and-order sentiment during debates in the legislature.

During debate on proposed amendments to limit social assistance for criminals, he praised police for their work and suggested judges are too lenient.

"[Police]do a good job, they go out and catch criminals, they bring them in, they book them," he said. The suspects then "go off to the judges and they get a slap on the wrist and they go back on the streets so they can do this again. That is not only frustrating for the police, it's frustrating for me," he told the legislature. 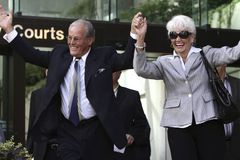 The 9-per-cent Premier pays and plays for popularity
October 28, 2010
Follow Justine Hunter on Twitter @justine_hunter
Report an error Editorial code of conduct
Due to technical reasons, we have temporarily removed commenting from our articles. We hope to have this fixed soon. Thank you for your patience. If you are looking to give feedback on our new site, please send it along to feedback@globeandmail.com. If you want to write a letter to the editor, please forward to letters@globeandmail.com.
Comments are closed