There have been growing fears in British Columbia that an increasing number of catastrophic wildfires could erupt because more than 18 million hectares of forest have been killed by a pine-beetle epidemic over the past two decades.

But new research shows that beetle infestations affecting millions of hectares in the U.S. Pacific Northwest have not been causing more severe wildfires.

"Insect outbreak areas may not be as much of a fire hazard as we previously thought," Garrett Meigs, the lead author of the study, said in an interview on Thursday.

"Insect outbreaks and wildfires have both increased in recent decades and so there's this expectation that there's a direct relationship," he said. "We anticipated there might be more extreme fire, canopy fire, in the initial years post-[beetle] outbreak. We didn't see that."

The study, which analyzed 81 fires over 25 years, found forests that had greater insect damage burned with less severity – not more, as expected – regardless of drought conditions or fire size.

The study found that while beetle infestations leave forests looking more vulnerable, what can happen is that insects kill some trees and leave others to survive, creating a "forest thinning" effect that reduces the amount of fuel available for wildfires.

Dr. Meigs, a postdoctoral research associate at the University of Vermont, said the study, which looked at forests in Washington and Oregon, may not be directly applicable to B.C. because of a number of different variables between those regions.

But he said forest managers throughout western North America will want to take the findings into account as they struggle to deal with a landscape where changing climate, spreading insect infestations and large, intense forest fires are interacting.

"It was an exciting time to do the study because these are really important issues," he said. "If someone is making decisions about allocation of resources, about which forest to protect or manage or where to allocate firefighting resources or fuel-reduction activities, these kind of management decisions could take our study into account."

In British Columbia, where 40 forest fires are currently burning, the province has allocated $163-million to wildfire risk-reduction programs this year. Some of that money is used to remove beetle-killed trees because of concerns they could increase wildfire risks.

A spokesman for the B.C. Ministry of Forests said the study has just been received and the government needs more time to review it before commenting.

Lori Daniels, a forest-fire expert with the Tree-Ring Lab at the University of British Columbia, cautioned that the U.S. study may not be directly applicable to British Columbia.

"I think the work they have done is excellent research," she said of the study. "It provides a good indication about the range of impacts that insects and fire have when they interact. But I'm cautious about transferring this type of information directly into British Columbia."

Dr. Daniels said the pine-beetle epidemic, which began in B.C. in the 1990s and primarily kills lodgepole pine, was more severe in B.C. than in Washington and Oregon, where the forests have a greater mix of tree species.

"In parts of our province, it was almost pure lodgepole pine that was being affected ... which means there wasn't a large amount of residual green trees [left alive]," she said. "So that's quite a different scenario than a mixed conifer forest where only a portion of the stand was affected."

Dr. Daniels also said research she did with Parks Canada, in which a forest was burned deliberately because it contained a large amount of beetle-killed wood, has shown that trees killed by insects can generate extremely severe fires.

"What we found is that the fire through the mountain pine beetle fuel was [more intense] than expected," she said. "The fire spread very rapidly. It was a crown fire which consumed large amounts of dead wood."

"They found something quite different," Dr. Daniels said of the U.S. study, which was done by researchers at the University of Vermont and Oregon State University.

British Columbia’s wildfire season off to busiest start in a decade
May 16, 2018 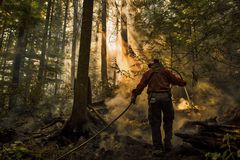 Alberta to start wildfire season a month early to ensure crews are ready
May 16, 2018 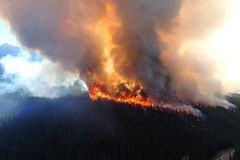 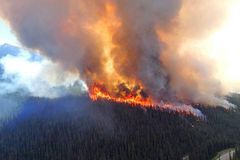