For a year and a half, Michael Hallatt has made frequent trips across the border, spending almost $350,000 stocking up on goods at U.S. grocery giant Trader Joe's, and then re-selling them at his Vancouver store, Pirate Joe's.

The shelves of Pirate Joe's are lined with everything from canned goods and cereals to baking mixes and pasta sauces, all bearing Trader Joe's federally registered trademark logo.

Now, Hallatt has been slapped with a lawsuit by the U.S. retailer, alleging trademark infringement, false advertising, and other things that it says hurt the company's brand.

The lawsuit, filed in May, alleges that not only is Hallatt not authorized to resell Trader Joe's products, he is misleading people by dressing up the shop in a way that looks similar to the U.S. stores.

"Defendants' prominent display of Trader Joe's trademarks and other intellectual property and their flagrant attempts to pass themselves off as an approved retailer of Trader Joe's-brand products convey the false impression that the defendants' retail store is affiliated with and/or endorsed by Trader Joe's," the lawsuit said.

Hallatt admits that his prices are slightly higher than what Trader Joe's shoppers would get in the U.S., but he maintains that everything he is doing is legal.

"I knew there would be legal jeopardy, but I knew I was operating within my legal right, so I decided I would defend myself if it came down to it, and it did," he said Wednesday.

"We're in a free market — Trader Joe's sells products to everybody. There are restaurants that use their products, it's on eBay, they're on Amazon...there's all kinds of ways to get Trader Joe's products outside of going into a store."

Hallatt has, however, stopped re-selling some refrigerated goods such as hummus because Trader Joe's has alleged that transporting perishable frozen food items across the border could lead to health risks, which would in turn harm the company's reputation.

There are no Trader Joe's stores in Canada, and Hallatt said he opened Pirate Joe's to cater to Vancouverites who want to "get their peanut butter and their cookie butter," but do not want to make the trip to Bellingham, Wash.

Hallatt, who just returned Wednesday morning from a grocery run down south, said he has filed a motion for Trader Joe's' complaint to be dismissed.

Vancouver lawyer Vincent Yip, who specializes in intellectual property law, said trademark infringement laws are jurisdictional. Since Trader Joe's trademark is registered in the U.S. and not in Canada, the company may have a harder time pursuing an infringement claim, he said.

Yip also said that in this case, infringement would only occur if those buying from Pirate Joe's mistake the Vancouver shop for Trader Joe's.

"Generally speaking, 'parallel importing,' or 'grey market importing,' is legal as long as the people reselling the goods aren't saying they're the authorized re-seller or authorized retailer," he said.

Outside Hallatt's shop, which was bustling with customers Wednesday, he proudly displayed a sandwich board that says "We re-sell authentic Trader Joe's products in an unauthorized but polite way." The "P" from one of the store's signs has also been removed to read "Irate Joe's."

Nowadays, Hallatt is forced to let other people do his shopping because he has been banned from some Trader Joe's stores in Washington.

But he said the hassle of frequent shopping trips and now the legal entanglements have all been worth it — particularly when the store has been experiencing an increase in sales lately.

"I used to say we get an 'F' as a business because it doesn't really look like a sustainable model. When your major supplier is an adversary, that's a problem," he said. "I'm hoping something changes, but I'm not going to back down, which means we'll stay open until we're told we have to close by a higher authority." 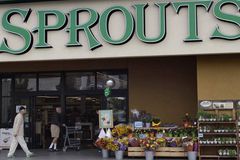 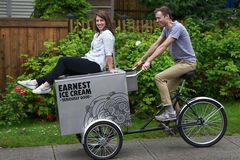