Closing arguments begin Monday in a high-profile case challenging the use of solitary confinement in federal prisons and a lawyer for the plaintiffs says they will urge the court the practice must "come to an end in Canada."

The BC Civil Liberties Association (BCCLA) and the John Howard Society of Canada have sued the federal government over the use of solitary, arguing it is unconstitutional, increases inmates' suffering and discriminates against offenders who are Indigenous or have mental-health issues.

The Globe and Mail has reported extensively on the prevalence and effects of solitary confinement, beginning with a 2014 investigation into the suicide of Edward Snowshoe after 162 consecutive days in segregation.

Caily DiPuma, acting litigation director for the BCCLA, said outside court the plaintiffs are confident the judge has "everything before him that he requires to come to a just outcome in this case."

"The main point of the closing [argument] will be that we have clearly established and demonstrated a variety of Charter breaches that have come to pass in relation to the practice of solitary confinement," she said. "And I think we will urge the court to accept that this practice has to come to an end in Canada."

The trial opened in B.C. Supreme Court in Vancouver in early July. The court has heard from inmates who have endured solitary – with some saying it drove them to attempt suicide – as well as correctional officials, medical professionals, and researchers.

Government lawyers wrapped their case Thursday. Closing arguments are scheduled to run for all of this week, with the plaintiffs beginning Monday and the defendant to start Wednesday.

Justice Peter Leask has indicated it could take months to issue his ruling.

A similar lawsuit in Ontario challenging the use of solitary confinement will resume in September. The B.C. trial opened with counsel for the plaintiffs invoking the names of three people who took their lives in segregation units – Mr. Snowshoe, Ashley Smith and Christopher Roy.

Joseph Arvay, one of the plaintiffs' lawyers, said the federal government failed to place hard limits on how long a prisoner could be kept in solitary and did not provide external oversight.

Mitchell Taylor, a lawyer for the federal government, argued the Corrections and Conditional Release Act and its administration comply with the Charter. He said the number of inmates in segregation has dropped considerably in recent years, from approximately 800 a day in 2014 to about 400 a day this year.

The trial has focused on the current solitary-confinement regime, not a new bill introduced by the federal government in June. The BCCLA has said both the current system and the new bill fail to guarantee an individual will not be held in solitary for years.

Justin Piché, an associate professor of criminology at the University of Ottawa who researches prisons, said if the federal government wins the case he fears Correctional Service Canada will be satisfied with having reduced its use of solitary and not pursue further reforms.

But if the plaintiffs win, he said he'd like to see the federal government immediately move to abolish segregation. "Some may say this isn't feasible, particularly because some prisoners request to be isolated, but this should be read as an indictment of incarceration itself," he wrote in an e-mail. "When someone asks to be segregated, what does this say about the dangers and damage of imprisonment?"

Efrat Arbel, an associate professor of law at the University of British Columbia whose research interests include prison law, said a ruling in favour of the plaintiffs would confirm what scholars and advocates have been saying for decades: that Canada's segregation regime violates basic standards of rights protection and is applied in harmful and discriminatory ways.

Such a finding, she said, would compel the government to overhaul its segregation regime.

BobbyLee Worm, who spent more than 1,100 days in solitary confinement, including one-near continuous stretch lasting more than two years, told the court she at one point attempted to hang herself because she felt "there was no other way out." Staff ultimately intervened.

Robert Roy, Christopher Roy's father, in an affidavit said his son did not show any signs of being suicidal before he was placed in solitary. He called his son's death "entirely preventable."

Robert Clark, a former deputy warden within Canada's prison system, told the court about a "code of secrecy" in which guards would cover up for their colleagues. He said there was considerable racism within the correctional service and a culture of collective indifference.

Bruce Somers, an assistant deputy commissioner with Correctional Service Canada in Ontario until his recent retirement, was the government's first witness and said there had been an "overreliance" on segregation in past years. But he said the service was trying to improve and no prison warden wanted to keep any inmate in segregation longer than necessary. 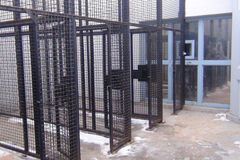