Approval has been given for a controversial plan to satellite tag an endangered species of killer whale that plies the waters off the Pacific Coast.

Researchers hope the tracking devices will reveal the orcas' activities during the winter, but another expert said the tagging could harm the vulnerable whales.

Southern resident killer whales are one of the most studied marine mammal species in the world, yet very little is known about where they go and what they eat during the winter months.

Brad Hanson, a wildlife biologist at the National Ocean and Atmospheric Administration, or NOAA, has U.S. government approval to attach the tiny tracking devices to the dorsal fins of six whales per season.

"We're trying to get better information about what they're doing during the winter. This is a period of time where a number of animals seem to disappear from the population," Mr. Hanson said in an interview.

"Trying to better understand what the risk factors during the winter are would potentially help management biologists ... make sure we have what's necessary to meet the recovery goals that are in the recovery plan."

But Ken Balcomb, a senior scientist at the Center for Whale Research in Friday Harbour, Wash., has seen other killer whales that were tagged off Alaska and is concerned.

"They're heavy-duty barbs, and the only way (the tag) comes off is tearing away flesh and leaving a golf-ball sized hole."

The average lifespan of a female killer whale is about 52, but Mr. Balcomb said one of the females in J-pod is close to 100. Males don't live as long, to an average of about 29, but a male in J-pod died last year at the age of 60.

Southern residents spend their summers around Washington state waters and off southern Vancouver Island. In the winter, they've been spotted as far north as Haida Gwaii and as far south as Monterey, Calif.

Mr. Balcomb, who's been studying southern residents for decades, said his concern is the barbs could cause an internal infection, like the minor puncture wound that killed a 20-year-old resident whale a few years ago.

"Because these whales live in an urban environment that has a lot of toxins and a lot of problems for their immune and reproductive system, they're especially susceptible to these injuries."

Mr. Hanson has tagged more than 250 whales from 15 different species and said there has been no adverse impacts connected to survival.

"There's been a lot of concern voiced about that. It's one of these things where we feel this is within the range of natural sorts of occurring tissue impact that affect the animals."

Both Mr. Hanson and Mr. Balcomb agree the whales often have cuts and scrapes on their hides and have many scars.

None of the resident whales have been tagged yet. Mr. Hanson is hoping to head out next month, but the residents aren't easy to find and in poor weather, they may not be able to tag the animals.

"They are sort of moving needles in a haystack," he said.

The tag is about the size of a nine-volt battery and it would be shot from a cross bow or pneumatic gun into the dorsal fin.

The tags can remain attached anywhere from three to nine weeks until they fall out, leaving the wound to heal on its own, Mr. Hanson said.

"Obviously, the further out we go from the tag date the more interesting the information, the more valuable it is for these longer-term monitoring periods."

The transmitter could last about six straight weeks, but in order to stretch out the life cycle, they would turn off and on the transmitter, he said.

Researchers hope to be able to follow the whales to collect samples of anything left of what the orca's have eaten and any fecal matter to determine what they've been eating.

While transient killer whales eat mammals, the diet of resident whales is mostly salmon. Mr. Hanson said they believe the whales eat Chinook salmon but that's part of what he hopes the tagging process will help determine.

A cross-border scientific panel is already looking into the possibility that limiting the lucrative Chinook fishery could improve the survival rate of the resident population. A decision from the panel is expected at the end of this year.

Mr. Hanson said he hopes their research will be able to contribute some information for the panel, along with more data about where the whales hang out in order to designate critical habitat areas under the U.S. Endangered Species Act.

Mr. Balcomb isn't sure the benefits of such a study would outweigh the possible dangers.

"(They) really don't have this planned out very well. But that doesn't tell us any more than what we already know, that they go as far south as California and as far north as Haida Gwaii."

However, Mr. Hanson's research on other whales, including transient killer whale in Alaska and whales in Hawaii that look like orcas and are called false killer whales, has surprised those who have been following those whales for decades.

He said he found both species went much further away than experts believed.

Mr. Hanson expects that once scientists know more about where the residents go, it will lead to more studies.

"That's sort of my goal for Southern residents is that once we have a better ideal of where we think these guys are going, then we would probably redesign our acoustic recorder deployments to essentially target those areas they appear to be spending their time and then see if that pattern continues." 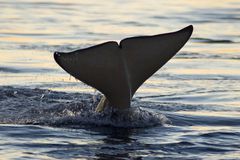 Orca-on-minke attack a whale of an experience
August 19, 2010 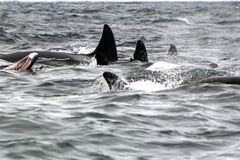 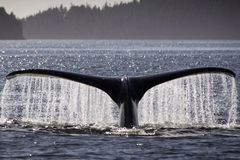