Debbie Delisser, a teacher in this city of about 34,000 east of Vancouver, can't figure out why gang killers are getting a break she never would.

"If I went out in the middle of the day and shot someone, you guys would have me in jail in a couple of days," Ms. Delisser, 50, told a forum at City Hall this week – the first since a series of incidents this year showed that Port Moody is not immune to gang troubles. They included the first homicides since 2002 in this quiet bedroom community.

By "guys," Ms. Delisser was referring to an attentive panel that included the mayor, the deputy police chief and a Vancouver Police Department inspector, whose presence reflected the fact that Port Moody and Vancouver have an integrated homicide department. All were listening as Ms. Delisser and others among an audience of about 50 vented on an issue that has many worried.

"My butt would be in jail because somebody saw a five-foot-nothing dark-haired girl shoot somebody," Ms. Delisser said. "But these guys are not in jail or we don't even know if they're suspects, and that's what frustrates me the most because I know you guys can do your job."

Gang violence in the Lower Mainland can happen anywhere, but that reality isn't sitting well in Port Moody. In May of this year, the city's first homicide in a decade saw a man with gang connections gunned down as he visited the recreation centre beside City Hall to play with his floor-hockey team.

Less than a month later, the 34-year-old founder of the prominent Independent Soldiers gang was fatally shot outside a local Starbucks by a masked gunman who got off six shots before fleeing in an SUV driven by another man.

Neither of these victims were residents of Port Moody, which is a point authorities emphasize in declaring gang activity has not taken root in the city. The victims just happened to be coming to town for hockey and a business meeting, they say.

But there was a third victim last weekend, a 32-year-old man with gang connections shot while staying at his parents' home in Port Moody.

During the forum, most speakers were supportive of the police, but still shaken. "I don't want to have to explain to my children why someone is lying in the street," one woman said.

There have been no suspects named or arrests made in any of the cases, which was a sore point for Ms. Delisser, who left the recreation centre a half hour before the fatal shooting.

"They're going around shooting people blatantly and it looks like they are getting away with it, getting away with murder because we never hear you have a suspect or they have somebody in mind," she told the panel.

While she understood police have to be cautious with the release of information, she wondered if some material could be aired to send a message to the perpetrators. "That might scare the jerks from thinking they have got the streets and you don't."

On that issue, Port Moody Mayor Mike Clay said police have to be discreet. "It would be fair to say there are always suspects," he told Ms. Delisser, suggesting those suspects would become defendants and then convicted parties. "I have every confidence that's going to happen."

Members of the panel noted that each of the three homicides has about a dozen officers working the case. And Chris Rattenbury, the deputy police chief, pleaded with members of the audience to call police if they see anything suspicious. The department's motto is, "No call too small."

The whole exercise came after a rally by an organization called Port Moody Families Against Violence was convened to, as a circulated poster suggested, "put pressure on City Hall to END shootings in Port Moody." When participants arrived, they found the high-profile panel ready for a forum instead, with much of city council in the audience.

While 83-year-old Tom McCloskey said he has never seen anything like this in the 73 years he has lived in Port Moody, the former refinery lab technician said he wasn't afraid. "I don't think they're going to attack an old guy like me." 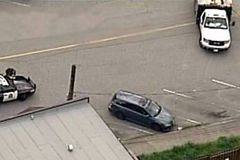 Man gunned down in Port Moody known to police
April 30, 2018
Follow Ian Bailey on Twitter @ianabailey
Report an error Editorial code of conduct
Due to technical reasons, we have temporarily removed commenting from our articles. We hope to have this fixed soon. Thank you for your patience. If you are looking to give feedback on our new site, please send it along to feedback@globeandmail.com. If you want to write a letter to the editor, please forward to letters@globeandmail.com.
Comments