A new U.S. government-funded report showing clear evidence cannabis is an effective remedy for those with chronic pain underscores the need for more research into how marijuana can help fight the deadly opioid crisis ravaging North America, according to one of Canada's leading pain researchers.

A report released Thursday by the National Academies of Sciences, Engineering and Medicine outlined nearly 100 conclusions about the benefits and harms of cannabis on a range of public health and safety issues. Drawing on studies published since 1999, the report by the federal advisory panel stated that marijuana can almost certainly ease chronic pain and might help some people sleep, but it may also raise the risk of developing schizophrenia and trigger heart attacks.

It ended with a call for more scientific information about cannabis so that health-care professionals and policy makers can make sound decisions because the current lack of evidence "poses a public health risk."

Mark Ware, a McGill pain researcher and vice-chair of Canada's recent federal panel on marijuana legalization, said one of the biggest takeaways from the new report, which he reviewed before publication, is that new research must now be funded to see whether cannabis can pare down the use of some opioids, a class of legal and illicit painkillers that has led to an ongoing crisis that has killed hundreds of Canadians over the past year.

"So far it's an association that's been reported on between states that have legalized cannabis and reductions in opioid mortality and use of other medications," Dr. Ware said in a telephone interview Thursday. "How can the medical cannabis sphere overlap with the opioid epidemic?

"Those associations need to be explored urgently."

Last year, data from Veterans Affairs showed fewer Canadian veterans have sought prescription opioids and tranquilizers in recent years, while at the same time prescriptions for medical marijuana have skyrocketed.

Jeff Blackmer, vice-president of medical professionalism at the Canadian Medical Association, echoed Dr. Ware's call for more research into the subject, noting federal funding into more cannabis research in general is expected after the Liberals introduce legislation legalizing the drug this spring.

"There's a lot of discussion about the substitution therapy [of cannabis for opioids] and, again, the challenge for physicians is: There is no evidence or very little evidence," said Dr. Blackmer.

Dr. Blackmer, who works half a day each week at the Ottawa Rehabilitation Centre treating people with spinal-cord injuries and multiple sclerosis, said at least half of his patients have asked him for a marijuana prescription. He said he rarely prescribes cannabis because he has a host of concerns about the lack of evidence surrounding the drug, including how it could react with other medications and its effect on driving.

For marijuana users or those considering it, "there's very little to guide them" on amounts and health risks, said Dr. Marie McCormick of the Harvard School of Public Health, who headed the committee behind the report.

Committee members cautioned that most conclusions are based on statistical links between use and health, rather than direct demonstrations of cause and effect.

The review found strong evidence that marijuana and similar compounds ease nausea from chemotherapy, with varying degrees of evidence for treating muscle stiffness and spasms in multiple sclerosis.

Limited evidence says marijuana and its chemical analogues can boost appetite in people with HIV or AIDS, and ease symptoms of post-traumatic stress disorder, the report concluded. But it said there's not enough research to say whether they're effective for treating cancers, irritable bowel syndrome, epilepsy or certain symptoms of Parkinson's disease, or helping people beat addictions.

Turning to potential harms, the committee concluded strong evidence links marijuana use to the risk of developing schizophrenia and other causes of psychosis, with the highest risk among the most frequent users.

There is a strong indication that using marijuana before driving increases the risk of a traffic accident, but no clear link to workplace accidents or injuries, or death from a marijuana overdose. There is limited evidence for the idea that it hurts school achievement, raises unemployment rates or harms social functioning. 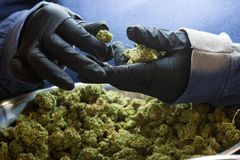