A B.C. man was convicted Friday of murdering four people, including his wife and stepdaughter, for financial gain, and the judge in the case told him he was a "predator" who should never be allowed out of prison.

A jury found Charles Kembo guilty on four counts of first-degree murder in the deaths of his wife, girlfriend, stepdaughter and a business partner. They were all killed one at a time between December 2002 and July 2005.

He was given an automatic sentence of life in prison with no parole for 25 years, although B.C. Supreme Court Judge Sunni Stromberg-Stein told him she would have imposed a harsher sentence if she could.

Judge Stromberg-Stein read a scathing assessment of the 41-year-old, who she denounced as a "greedy, selfish and corrupt" criminal who preyed on the people who trusted him most.

"You are a predator - you preyed on innocent, vulnerable people, including those closest to you, exploiting those who made the mistake of trusting you . . . when you stood to benefit financially from their deaths," Judge Stromberg-Stein told Mr. Kembo, who sat in the prisoner's box in a black fleece jacket and at times appeared to be grinning during the hearing.

"You are a serial killer, a very dangerous man. The public deserves protection from you. You should never be permitted to walk the streets a free man."

During the trial, which began last October, the Crown accused Mr. Kembo of an elaborate scam to use the personal information of his victims to obtain credit cards, bank accounts, companies and a life insurance policy totalling hundreds of thousands of dollars.

Outside of court, prosecutor Hank Reiner applauded the verdict and the judge's harsh statements about Mr. Kembo.

"The judge was pretty clear she thought the right verdict was rendered - I've never heard any statement as powerful as that on sentencing," Mr. Reiner told reporters.

"She said it very clearly what a vile human being he is. I think it's pretty clear he's never going to get out, not with four counts of first-degree murder."

Mr. Kembo's lawyer, Don Morrison, said his client would appeal the verdict, although he declined to say on what grounds such an appeal would be based.

"The jury has spoken, and I have done many jury trials and I accept what they say," said Mr. Morrison.

"There can be appeals depending on whether the instructions to the jury were correct, whether the rulings were correct. There's a number of those that will be reviewed."

Margaret Kembo's body was never found, while the bodies of the other two women were discovered in Richmond, B.C.

Mr. Samuel was found strangled and buried under leaves in a Vancouver park. His penis had been chopped off and stuffed in his pants, along with notes suggesting he deserved to be killed.

Mr. Kembo testified in his own defence earlier in the trial and denied killing the four, though he admitted to guilt over an incestuous relationship with Ms. Yeung.

When Mr. Kembo's wife disappeared in December 2002, he told the trial he assumed she had entered a Buddhist monastery in Hong Kong.

Mr. Samuel's body was discovered in November 2003. Mr. Kembo said he loved him like a brother and though the two men had several business-related phone conversations the day before Mr. Samuel died, Mr. Kembo denied ever being with him in the park.

When Ms. Ma disappeared in November 2004, Mr. Kembo said he assumed she had also travelled to Hong Kong. Ms. Ma had suggested she would go there to improve her import-export clothing business, he said.

Ms. Yeung's body was found in July of 2005 in water. She was wearing only a bra and was wrapped in garbage bags, with chemical burns on her face.

He has remained in custody since his arrest.

Mr. Kembo was known as Charlos Mathews Gwazah when he landed at Pearson International Airport in September of 1989 from the landlocked southeast African country of Malawi.

He became a government-sponsored convention refugee, which allows a person to stay in Canada if they have a well-founded fear of persecution based on race, religion, political opinion or nationality.

Immigration and Refugee Board documents show over the next three years Mr. Kembo also made refugee claims under three different names. 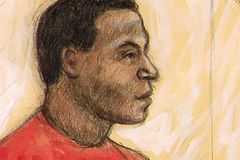