Elizabeth Denham, British Columbia's Information and Privacy Commissioner, raised concerns this week about the government's penchant for secrecy when she reported on the Liberal administration's high failure rate in responding to freedom of information requests.

Ms. Denham's investigation showed that the number of times the government reported it had found "no records" climbed from 11 per cent in 2002 to 18 per cent by 2010, then to 21 per cent and 25 per cent over the past two years. The most secretive department of all was the Premier's Office, which gave a "no records" response in 45 per cent of all FOI requests.

Ms. Denham talked with The Globe and Mail about her findings and concerns.

The Premier's Office's explanation for 'no records' is that they don't write things down because they are a small office and like to communicate one on one. Is there any doubt in your mind about what the motivation is for this kind of 'oral government?'

I can't speculate about what the motivation is, but I can say that the Premier's Office made it very clear and made unequivocal representations that they follow a transitory records policy, so they destroy [e-mail] records that they feel are of little enduring value. I think the government could do a better job in defining as a whole … what transitory records are and what they aren't.

It's not in the report, but did it come up for discussion that government staff can use private e-mails to communicate and thereby avoid putting anything on the record?

Government agencies are required to follow the law when it comes to responding to FOI requests. My expectation is that government will follow the law, which would include the search of a private e-mail account for records that are responsive to the request.

So, if there are responsive records relating to government business and they happen to be in private e-mail, then the government is required to produce those records in response to an FOI request. … I think a lot of people, journalists and people in the public, don't realize this, but e-mails that contain information about government mandate, government business, sent from a personal account, are subject to those FOI laws. And the determining factor is not the type of account, personal or government, but actually whether the e-mail relates to the performance of that employee's or that contractor's duties.

So the private e-mail that's very much in the news this week about ethnic voter strategy should be captured in an FOI request?

If it … encompasses government business, then it would be subject to an FOI request … We don't differentiate between private e-mails and government e-mails. What we are looking for is whether or not the records are related to government actions, government decision making. And if they are then they should be made available.

And that really gets to the heart, I think, of the importance of this research you are doing. Something should be part of the record, and yet it's not because they said, 'Well, we talked about it, but we didn't write it down.'

Right. And there's no rule in law that prohibits government from operating on an oral basis. And that's what I'm very, very concerned about. So in this investigation, we saw clear evidence of oral government.

I've asked the government to amend the legislation so that there is a duty to document an accurate record of government actions. Because if there's no legal duty to write things down, I think that's not just poor practice or poor governance, but it's very difficult for the public to actually trust the government and hold them to account for decisions that are made. So I really believe there should be a duty to document. 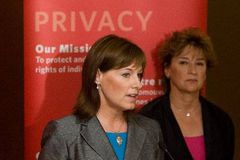