The top bureaucratic arm of the federal government decided a fisheries scientist who published a paper on a virus that could explain the decline of Fraser River sockeye would not be allowed to speak to the media, even though her department had no objection, an inquiry has heard.

Kristi Miller, who works in molecular genetics for the Department of Fisheries and Oceans, on Thursday detailed the Privy Council Office's decision during her second day of testimony at the public inquiry. The commission headed by B.C. Supreme Court Justice Bruce Cohen was set up to examine the 2009 collapse of the sockeye run in B.C.'s longest river.

In January, a study by Dr. Miller was published in the prestigious journal Science in which she hypothesized a virus was infecting the fish before they entered the Fraser. She received calls from journalists about it, but wasn't given clearance to discuss it.

"I believe DFO was on side with having me speak publicly about the work from that paper. I think people were making their best efforts to have that happen. It eventually was taken out of their hands. … I believe it came from the PCO."

Dr. Miller said she learned of the PCO's involvement through the "inquiry process," but she didn't elaborate.

The testimony came one day after Dr. Miller denied she was singled out and silenced by DFO. The Vancouver-Island-based researcher told the commission on Wednesday that a number of Fisheries and Oceans employees were told not to discuss anything they were working on until they testified at the inquiry.

On Thursday, she said the PCO's reluctance to let her explain her work even after DFO appeared to support the move, forced her to watch others try to do it for her.

"It was very frustrating to watch some of the media reports that came out. My colleagues [at the University of British Columbia]did their utmost to talk to the media and inform them about the key messages in the paper. But they weren't genomics experts. They don't know a lot about viruses or about how that hypothesis was proposed. I think it would have been very useful if I had been able to speak with the media and just make it clear what we did and didn't know."

The first several months of the Cohen Commission's hearings were relatively low-key, but Dr. Miller's arrival created a frenzy among the media and activists who oppose fish farms believe the scientist was muzzled because her discovery will point to aquiculture as a cause of the decline of the wild stocks.

Dr. Miller testified it's unclear whether fish farms are linked to what she believes is a parvovirus. She said salmon farmers recently agreed to let her start testing for the parvovirus at their facilities.

The scientist left Thursday's proceedings escorted by two earpiece-wearing security guards. She said she could not conduct any interviews. When asked if she was glad her testimony was over, she laughed and said yes before the elevator doors closed.

Dr. Miller created a stir at the hearing on Wednesday when she said the parvovirus "could be the smoking gun" in the disappearance of millions of Fraser sockeye in 2009. One day later, she tried to pour cold water on that statement and cautioned a lot more work is needed.

"What I really meant was that this could be a major factor, not the major factor, because I also agree with others that there is no major single factor. I did put a lot of ifs, ands, or buts at the time I made that statement. The main one is that we have to be able to demonstrate that we have an infectious disease, that it causes mortality."

Further complicating matters is the fact that funding for Dr. Miller's program is in jeopardy due to a shift in policy for paying staff.

DFO scientist says she may have the 'smoking gun' that killed Fraser River sockeye
August 24, 2011 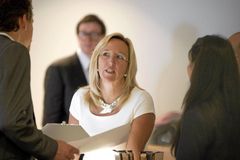 Fisheries and Oceans researcher Kristi Miller still not talking
August 23, 2011
Use closed containment for fish farms, ex-Canuck tells Cohen inquiry
August 22, 2011
Follow Sunny Dhillon on Twitter @TheSunnyDhillon
Report an error Editorial code of conduct
Due to technical reasons, we have temporarily removed commenting from our articles. We hope to have this fixed soon. Thank you for your patience. If you are looking to give feedback on our new site, please send it along to feedback@globeandmail.com. If you want to write a letter to the editor, please forward to letters@globeandmail.com.
Comments