A striking and controversial design for an "origami" glass tower on Vancouver's waterfront was kicked back this week to its international architects for another try. But that's hardly the end of the story.

The proposal for the faceted tower, on a site between the city's historic Gastown district and its beautifully restored 1914 train station, has ignited a series of debates, including one about the whole future of the waterfront in that area.

One is about whether the design is too clunky, ugly or big for its site. The site of the future tower is a parking lot between Waterfront Station and The Landing, a 1909 building that is home to the Steamworks restaurant. Cadillac Fairview owns both the parking lot, which has a spectacular view to the north, and the station.

A second is about how to make old and new work together.

But a third debate is about the revelation that the glass tower is meant to kick off development for a whole new "waterfront hub" district. Chicago architects Gordon Gill and Adrian Smith presented their 26-storey design – which appears to be composed of glass triangles that start from a narrow base and fold up and over the station – to Vancouver's urban design panel Wednesday. They emphasized that the building is meant to be a gateway to the future city.

"This particular site is important to both the downtown district and the future development to the north. It is bringing the downtown to the water's edge," Mr. Smith said. That is something that is happening in cities around the world, he said, where former industrial districts that existed on the margins of downtowns are being converted.

That district was conceived by city planners in 2009. They envision the waterfront hub as the future home for 170,000 square metres of new commercial space, stepped down to the waterfront in a cluster of seven buildings.

The plan is meant to take advantage of the transit that converges there – the SeaBus, SkyTrain Expo Line and Canada Line, West Coast Express and several bus routes – and it also includes some new roads, including one that would run along the east end of the parking lot.

That road was one of the limitations that forced the architects to squeeze the new tower against the station.

But some people say the whole waterfront plan needs to be changed.

"If you made a strong case for a different waterfront vision, it wouldn't take that big a public outcry to change this," said Michael Alexander, an urbanist who runs Simon Fraser University's City Conversations, which often focuses on city planning topics.

Mr. Alexander, who was appalled by the building design, said the waterfront plan needs to focus instead on creating an attractive public area that takes advantages of the mountain and water views in that area.

The city's urban design panel, a group of architects, engineers and others who provide advice only, did not support the design by a 4-2 vote.

But none said they thought it was too high or too dense or that there was something fundamentally wrong with the waterfront plan the building is meant to be part of.

Instead, they said the building was too close to the station and that its design didn't do enough to make the public spaces and ground level of the building attractive to Vancouverites who will pass by regularly.

"The public domain is a critical piece of what Vancouverites see as part of their city," said Ryan Bragg, the panel's chair.

A former city planner who helped develop the waterfront plan, and still supports it, said he thinks the building is just too big.

"It's perfectly understandable why a developer would want to do as much as he could," said Ralph Segal. And Cadillac Fairview, which has poured a lot of money and effort into maintaining the train station, deserves density.

But, he said, the building should be half the current size of 37,000 square metres.

"You could put in a very dynamic design and a very slim building," Mr. Segal said.

It remains to be seen in the coming year which of those solutions will prevail with city planners, architects and owner Cadillac Fairview. 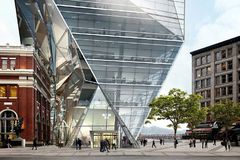 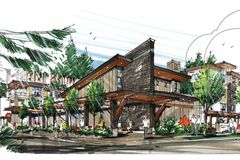 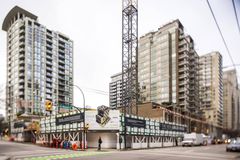