Staff and contractors at Vancouver Opera have been asked to take pay cuts, as the opera company's officials work toward financial stability. The company is looking for a 2-per-cent rollback across the organization.

Staff were told of the proposed measure last week and offered various options for cuts, first at a meeting and later in an online poll, asking which reduction method they preferred. According to correspondence obtained by The Globe and Mail, options include unpaid days off, reductions involving provincial health-care premiums and matching RRSP contributions, an across-the-board 2-per-cent salary reduction and donations to the opera as a payroll deduction (for which employees would receive a tax credit) – or various combinations of those options.

The atmosphere among staff has been described by someone with knowledge of the situation as "a bit of a revolt."

VO's annual budget this year is projected to be about $9.6-million, according to general director Kim Gaynor when reached by The Globe. In a note that appeared with the online poll, Ms. Gaynor said the company has found more than $800,000 in savings for next year.

The cuts in pay are expected to save the opera about $45,000. In addition to the administrative staff, musicians, chorus members and backstage staff are being asked to participate equally with a reduction of two per cent, according to the survey note.

Stunned staff have sent a letter of protest to senior management, saying it was unfair for staff to be asked to make decisions that would adversely affect their colleagues. The poll closes June 30, but the letter indicated that any staff who had not already voted would not be doing so, and that the votes registered should not be taken as the majority opinion.

"The proposed reductions represent a severe blow to an already weakened company morale, damaged by a lack of transparency, poor communication and uninformed decision-making," the letter states.

It alleges that VO staff were not consulted on decisions affecting their work and departments. "This has resulted in a misuse of company resources, as staff experts are not involved in planning and often forced to try to work within parameters which they know to be unfeasible, and on situations they could've made suggestions to improve."

When contacted by The Globe, Ms. Gaynor said discussions were under way and that the cost-cutting process was in its early stages.

"It's necessary for us next year to control expenses more tightly and [the wage rollback] is just one very small part of a much bigger program to go and look at all ways in which the organization can be more financially and fiscally responsible," she said.

As for the negative response to the online polling, Ms. Gaynor said the company was trying to be inclusive.

"It's always a discussion with everyone. I consider everyone in the organization that makes this place work. It's not a hierarchy where we decide and they have to conform; it's a discussion," she said.

"We've asked people in the organization in which way they would prefer for us to do that because of course there are many different ways that you could achieve the same result," she later added. "And my feeling is that it shouldn't be imposed; that it should be a discussion and a negotiation. So people have been asked for their opinion on how best to achieve those results so it's not us imposing a solution; it's a participatory conversation."

Ms. Gaynor would not confirm details of any other possible cuts, including whether performances will be scaled back or rehearsal schedules altered.

"No decision has been reached. The process has just begun so it's very premature to be talking about it," she said.

This year marked the inaugural Vancouver Opera Festival, which replaced VO's traditional "stagione" format – a measure implemented not just to save costs but to respond to changing demographics and market conditions. The decision attracted mixed reviews from subscribers and others in the arts community. This year was Ms. Gaynor's first season as general director, after the retirement last year of James Wright.

The protest letter provides insight into this spring's inaugural festival, at least from the point of view of staff: "Many of us worked tirelessly to ensure that the events as outlined by management were able to proceed, without understanding the logic or justification behind many of the decisions we were required to implement. Now, we are being asked to sacrifice pay, benefits, or take unpaid leave, without any indication of how we could continue to manage our current workload, whether there will be a guarantee of no further cuts or changes to current staff positions, or what plans are in place regarding current staff vacancies and potential additional contract positions," the letter states. "This move on the part of VO leadership will have a far more damaging impact on staff morale and commitment to the organization than can be made up for by any small amount of potential savings."

While the two main-stage operas – new productions of Otello and Dead Man Walking – were critical hits, attendance was not where it should have been, according to one opera supporter. This enthusiastic supporter, who asked not to be named, indicated that if the city wants to keep opera in town, people are going to need to better support the productions the company mounts.

"Vancouver Opera has a very important role to play in the ecology of the arts community in Vancouver and we're all working very hard to ensure that we can do that in a fiscally responsible way," Ms. Gaynor said. "My hope is that everyone will understand that and will want to participate in it voluntarily for the sake of preserving the company, the employment of individuals, the employment of artists and for the audiences who enjoy what we do." 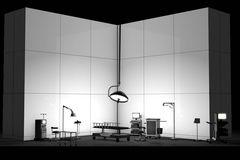 Calgary Opera director says he quit production over selection of white singer
April 12, 2017
Follow Marsha Lederman on Twitter @marshalederman
Report an error Editorial code of conduct
Due to technical reasons, we have temporarily removed commenting from our articles. We hope to have this fixed soon. Thank you for your patience. If you are looking to give feedback on our new site, please send it along to feedback@globeandmail.com. If you want to write a letter to the editor, please forward to letters@globeandmail.com.
Comments