A wildfire that has erupted in Burns Bog could smoulder underground for months, says an expert who warns that the world's peat lands – once so waterlogged they were almost impossible to ignite – are turning into major fire hazards because of development and climate change.

"This fire could be quite severe," Mike Waddington said of the blaze that began on Sunday in the bog in North Delta, casting a haze of blue smoke over the Lower Mainland.

The 78-hectare fire was under attack on Monday by crews from the Delta fire department, Metro Vancouver and the B.C. Wildfire Service, which had bombers and helicopters scooping loads of water from the nearby Fraser River. It was about 40-per-cent contained and officials were hopeful it could be put out quickly.

"This type of low-level fire has the potential to burn underground, but at this time we feel it has not yet penetrated the peat line," the municipality of Delta said in a statement.

But Dr. Waddington said such fires can burrow deeply into peat, making them hard to extinguish.

"These [bog] fires are very difficult to fight," said Dr. Waddington, a professor of ecohydrology in the School of Geography and Earth Sciences at McMaster University in Hamilton. "They are dangerous because they smoulder underground for days, to weeks, to months. … They also produce a lot of smoke, and that can be dangerous from a health perspective."

He published new research last week that showed bogs globally are becoming more susceptible to fire because peat mining and other developments have affected hydrology and made them drier. Climate change is making the situation worse, he said.

"What we looked at was the risk of fire in managed peat lands. These are peat lands that have been either drained and/or mined," Dr. Waddington said. "Burns Bog actually presents a really good example of that, where starting in the 1930s, the peat land was drained and mined for a period of time. As a result, the system became much drier and now … we're seeing that fire burning."

"These are ecosystems that are normally saturated. The water table is usually at or just below the surface, and these ecosystems may burn every once in a while and that burn is generally quite limited to a few millimetres or centimetres [deep] at most," Dr. Waddington said.

As the bogs dry out, however, the layers of peat become more dense, creating ideal fuel, and sphagnum mosses die off, removing a natural fire retardant, he said.

"I like to call them super mosses when it comes to fire because certain species can hold so much water [even] under dry conditions that they very seldom ignite, and if they do they only just singe. So what we have created is a bit of a triple whammy – drier, denser and less moss. And all three of those point to longer, deeper and more severe fires in the organic soils," Dr. Waddington said.

Joe Spears, a West Vancouver lawyer who represented the Burns Bog Conservation Society in an environmental protection case, said he doubts the current fire will be extinguished soon.

"You've got all this dry material [underground] that's going to burn, and putting a little water on the top of it won't stop it," he said. "You've got a fire that could burn until Christmas because you don't have the [natural water table] in there any more."

In 2014, Mr. Spears was unable to persuade the Federal Court to allow greater environmental oversight of the South Fraser Perimeter Road, which was recently completed along the edge of Burns Bog.

"What the road has done is exacerbate an existing [hydrology] problem and maybe it's been like a multiplier or a tipping point," he said.

Richard Hebda, curator of botany at the Royal BC Museum, said it is too early to tell what impact the new road had on water levels, but it's clear Burns Bog was made drier by developments over the decades.

"It's been highly modified through peat mining. That's one factor. The other is that the bog was drained from the margins through ditches for various purposes, industrial growth, the building of highways and farming," he said. "And consequently what used to be a much more open, much wetter bog with low-growing shrubby plant communities has become more wooded, so it's now much more prone to … more intense fires than we've had in the past."

Dr. Hebda said the government has put in a great deal of effort to protect the bog, and some areas have been restored to a natural state, but a serious fire could undo that restoration work, damaging the ecosystem and allowing invasive plants to flourish. 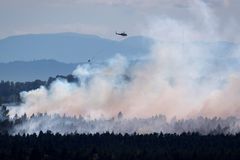 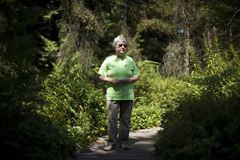