British Columbia's new Ombudsperson says a public inquiry may be the best way to investigate the firings of eight health researchers three years ago, but Jay Chalke said he would only take on the task if the government grants him more powers.

In a letter sent to legislators Tuesday, Mr. Chalke said that members of a legislative committee should give "the utmost consideration" to the call for a public inquiry from the employees who were fired.

But he said that if he is to proceed, he has some conditions before he takes up the Health Minister's "very rare and perhaps unprecedented" request to investigate the issue.

Among them are his demand for unanimous bipartisan support from the legislative finance committee and the power to get information from people under confidentiality agreements.

He stated in his letter that any investigation would be seriously impeded by the legislation binding his office, including the blanket confidentiality clauses that have become the norm for most government employees – especially those working with health-care data.

Mr. Chalke said the government would have to make it clear to those testifying that they must diclose all information or else change the law to give his office access to information protected by such agreements, as is enjoyed by the "more modern" office of the Representative for Children and Youth.

"My concern about this issue is so significant that I would formally ask that the committee not refer this matter to my office unless it is accompanied by a recommendation to government for an urgent legislative amendment," he wrote.

In recent weeks, the B.C. government has been under intense pressure from the fired workers and the family of PhD student Roderick MacIsaac, who killed himself after he was publicly dismissed in the fall of 2012. The province has apologized for firing Mr. MacIsaac and has rehired or settled out of court with most of the employees. Lawsuits involving two others are ongoing.

When the researchers were fired, the health minister at the time suggested there had been a massive privacy breach, which would be referred to the RCMP. But access to information documents have shown the province never gave the Mounties the evidence they required to start an investigation, and one was never conducted.

Mr. Chalke's conditions for accepting the case also include a supplemental budget from the Finance Ministry so that no other investigations are displaced, as well as an unlimited amount of time to examine the firings.

Mr. Chalke, a former assistant deputy minister of justice, began his term last week by contradicting predecessor Kim Carter's assertion that the Ombudsman's office would be equipped to look into the health firings scandal.

In her reply to his letter, Attorney-General Suzanne Anton sent a letter to the legislative committee Wednesday stating that many of Mr. Chalke's concerns would present challenges to any public inquiry into the matter. She said the Ombudsman could notify the legislative committee if his investigators were hamstrung by any confidentiality agreements and those concerns could be addressed by redacting names or any other information that would violate those agreements.

George Heyman, an NDP MLA and member of the committee communicating with the Ombudsman, said the Attorney-General's letter did not allay his concerns.

"At first blush, it appears to be an attempt to very quickly brush off the concerns of the Ombudsperson," Mr. Heyman said Wednesday evening. "Frankly, we should speak to the Attorney-General or someone from her ministry as well, and we could discuss that at committee [next week]."

Health Minister Terry Lake has repeatedly said a public inquiry would be too costly and slow.

Mr. Lake declined an interview request Wednesday, but a spokesperson sent an e-mail saying the government "recognizes the public's desire to fully understand what took place in regard to this issue."

"I will now leave the committee to do its work and let the process unfold as they and the Ombudsperson see fit," his statement read.

The Ombudsperson's office was created in 1979 to look into whether public authorities such as provincial ministries, provincial boards, commissions and health authorities have acted fairly.

Ombudsperson may examine health firing scandal in B.C.
May 15, 2018 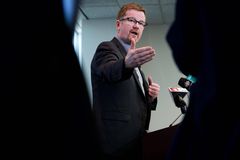