Ocean-borne radiation from the 2011 Fukushima nuclear-reactor meltdown in Japan has been detected at the British Columbia shoreline, marking the first time Fukushima contamination has made landfall in North America.

The amounts of radiation detected are low and do not pose a health threat to humans, fish or the environment. But the discovery is part of a pattern that is being closely watched by scientists around the world and has mobilized volunteers helping to track the movement of contaminants on ocean currents.

Previous monitoring by Canadian government agencies had detected air-borne contaminants showing up in B.C. kelp and seawater in the weeks following the nuclear disaster in 2011. And last November, researchers detected radioactivity 150 kilometres offshore of northern California. But no radiation had been found along beaches or shorelines where volunteers had been sampling since 2013.

That has now changed, with the announcement that ocean-borne contamination showed up in a sample collected by a volunteer from a dock in Ucluelet on Feb. 19.

"When I speak to people in public, the primary question they have is about the safety of seafood that comes from the Pacific and from our coastal waters," Jay Cullen, a chemical oceanographer with the University of Victoria who leads InFORM, a radioactivity monitoring network, said on Monday.

"This project gets directly at those questions by making measurements and quantifying the risk associated with being on or in the water or eating seafood from the Pacific," he added.

InFORM, founded last year, comprises government, academic and non-governmental organizations and a network of citizen volunteers. Each month, InFORM sends sampling kits to volunteers in about 14 communities along the coast. More than 600 people contacted the network to express interest in being part of the program, Dr. Cullen said.

Woods Hole Oceanographic Institution, a U.S.-based research partner in InFORM, said on Monday its scientists had detected small amounts of radioactivity in the Ucluelet sample. The sample contained trace amounts of cesium-134 and cesium-137 – two forms of radioactive cesium that do not occur in nature.

Cesium-137 is found in all the world's oceans as a result of nuclear weapons testing. The substance has a relatively long, 30-year half-life – meaning it takes 30 years for one-half of the cesium-137 in a sample to decay. Cesium-134, however, has a two-year half-life, meaning that if it shows up anywhere in the ocean, it is a recent addition – and the only recent source of Cesium-134 has been Fukushima.

The trace elements were well below internationally established levels of concern for humans and marine life. If someone were to swim for six hours a day every day of the year in water that contained levels of cesium twice as high as the Ucluelet sample, the resulting radiation dose would still be more than 1,000 times less than that of a single dental X-ray, Woods Hole said.

On March 11, 2011, a 9.0-magnitude earthquake and resulting tsunami led to meltdowns in three of six reactors at the Fukushima nuclear power plant. The disaster sent radioactive material into the air and into the Pacific Ocean. Models predict contaminated seawater will reach Canadian waters, posing potential environmental and public-health concerns on Canada's West and Arctic coasts, InFORM says.

The impact in Canada is expected to be small, but researchers say they need more information to quantify the risks. Models suggest contamination should peak this year or early next before beginning to taper off, Dr. Cullen said. 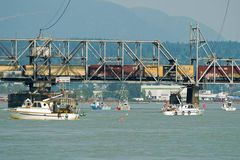