Five years after the Fukushima nuclear accident in Japan, radioactive contaminants continue to circulate across the Pacific to Canada's West Coast, but not at dangerous levels.

A B.C. scientist monitoring fish for tell-tale traces of cesium-134 said the radionuclide, which is the fingerprint of the Fukushima disaster, has been found in seawater but not in recent samples taken from 156 salmon.

Steelhead, Chinook, sockeye and pink salmon were collected by First Nations from locations spread along the B.C. coast last year as part of an ongoing monitoring program.

In releasing the latest test results, Jay Cullen, with the School of Earth and Ocean Sciences at the University of Victoria, said Monday even with the most sensitive measurements possible, no trace of radioactivity from Fukushima was detected in any of the salmon.

He said tests did find low levels of cesium-137 in seven fish, but cesium-134 was not also found in those salmon.

"Because no c-134 was detected in these fish it is not possible to say whether detectable c-137 can be attributed to Fukushima contamination, or simply normal variability in contamination owing to nuclear weapons testing fallout," Dr. Cullen said.

"The vast majority of c-137 that's in the environment today came from weapons testing; fallout from atmospheric weapons tests last century," he said. "And also there is an imprint of the Chernobyl disaster in 1986 in the Pacific."

Dr. Cullen said seawater far offshore and in coastal waters continues to show low levels of contamination from 2011, when an earthquake and tsunami caused a nuclear meltdown at Japan's Fukushima power plant. The accident released a pulse of radioactive material into the Pacific Ocean and the atmosphere. Debris has drifted across the ocean and for the past few years has been washing up on West Coast beaches.

Dr. Cullen said tests in recent months have shown that the levels of radioactive contamination in sea water are low, but are varied depending on where the samples are taken.

"Offshore the contamination is much more evenly distributed, from place to place.

"Along the coast, probably because of complex water circulation and freshwater inputs, we see it show up in certain places more often than in others," he said.

Dr. Cullen said none of the measurements raises any health concerns.

"It's thousands of times below the maximum allowable [level] of cesium in our drinking water. It's still a very trace level. In order for us to detect it, we have to use the most sensitive techniques that we have," he said.

"The amount of radioactivity from these isotopes from Fukushima in our water or in our fish [is] a fraction of the count you'd get using a Geiger counter."

Dr. Cullen said the level of contamination in the Pacific off the West Coast continues to rise, but that was anticipated.

"Given the time that it takes for the ocean currents to bring that contamination as it spreads across the North Pacific this is when the models predict those levels should be peaking," he said.

"The heart of that contamination is just arriving offshore."

Dr. Cullen, who works with a network of researchers from Woods Hole Oceanographic Institute, Health Canada, Fisheries and Oceans Canada, the University of B.C., the University of Ottawa and UVic, said monitoring of both seawater and fish will continue and shellfish will be added to the testing this year.

"The goal of the InFORM project is to continue to monitor the water and fish because this information is … useful for determining what the risk might be to the ecosystem or to humans who rely on fish," he said. 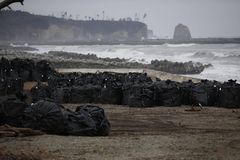 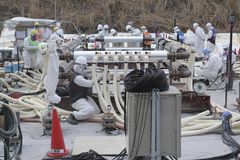 Japan restarts reactor after break from nuclear power due to Fukushima meltdowns
August 11, 2015 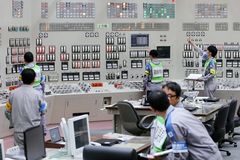