Members of a loosely organized counterculture group that holds mass camp-outs to celebrate peace, love and global harmony are having a hard time finding a place to gather in British Columbia.

The Rainbow Family's plans to hold its "world gathering of tribes" at a remote beach on northern Vancouver Island were frustrated on the weekend when the provincial government closed Raft Cove Provincial Park.

A government spokesman said Sunday the closing was made because the park, reached by a 45-minute hike on a rough trail, has only about eight or nine designated camping spots. Up to 2,000 people were expected to attend the Rainbow Family's month-long gathering.

"The closure was prompted over specific concerns that an increase in the number of visitors unprepared for such a remote and rugged location would significantly increase the risk to public health and safety, the protection of the natural environment and the preservation of park values," the B.C. Ministry of Environment said in a statement.

Park officials were waving down traffic on the logging road that reaches the trailhead at Raft Cove, Sunday, advising people that the park was closed and asking them to move on.

The park closing, which came after some area residents raised concerns, has forced the Rainbow Family to scramble to find another location. And after being rejected twice now in B.C. (public complaints also recently forced the Rainbow Family to abandon plans to hold the gathering at Meadow Creek in the Kootenays), the group is not being so public about its next move.

The Rainbow Family, which on its website describes itself as the "largest non-organization of non-members in the world," usually communicates openly on Facebook.

But after the Raft Cove rejection the group has become more guarded.

"Raft Cove [family] is relocating … all info has gone offline … please call who you know. Satellite phone on the way to the beach to connect fam … trust who you know … do NOT post info you receive," stated one posting on a Rainbow Family site.

Pat Gwynne, who runs the Scarlet Ibis Pub in the small logging town of Holberg, near Raft Cove, said she thinks the group may be moving on to another park on northern Vancouver Island.

"I did hear some of them say they were going to San Jo," she said, referring to San Josef Bay in nearby Cape Scott Provincial Park.

Ms. Gwynne said the Rainbow Family campers who stopped at her pub were all "very nice and polite" although clearly disappointed Raft Cove had been closed.

"There was only one guy who was kind of nasty," she said. "But he'd come all the way from New Zealand just for this gathering."

The B.C. government closed the park after public concerns were raised about the possible impact 2,000 campers could have in a sensitive wilderness area that has only a few pit toilets.

"I feel badly for the Rainbow Family," said Ms. Gwynne. "But I'm also concerned about the beach. Twenty people would be OK in there. But 2,000 and for the length of time they proposed? That's just a scary thought."

The world gathering is supposed to run from Aug. 6 to Sept. 6, from new moon to new moon. It was originally planned for Meadow Creek but at the last minute was moved to Raft Cove.

A posting on a Rainbow Family community Facebook page said Meadow Creek was cancelled because of forest fires "and some local opposition."

Jenny Hadikin, who runs the Drifter's Restaurant Pub in Meadow Creek, said locals "were up in arms" when they heard a massive gathering was planned in their community.

She said the campsite chosen by the group had only two toilets.

"And we heard up to 10,000 people could be coming. It would have just overwhelmed this community," she said explaining why people were opposed to the gathering.

Members of the Rainbow Family couldn't be reached for comment.

The group, which has no formal structure, was founded in the early 1970s in the U.S. and traces its roots to the hippie movement of the 1960s. There are regional and international gatherings throughout the year where members create instant communities that are open to all. This is the second world gathering the Rainbow Family has held in Canada. The first was in Quebec in 2004. 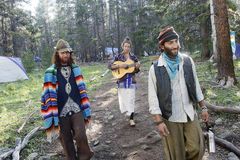 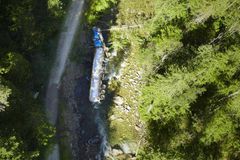 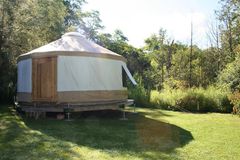