Just after 7:30 a.m. one morning earlier this week, Vancouver's most vexing transit problem plays out on the sidewalk outside the Commercial Drive SkyTrain station as it does every weekday rush hour.

Politicians and pundits have had much to say about the issue, but no one says much this morning. Instead, dozens of people line up in silence for the westbound double-length 99B buses that arrive every 90 seconds,

Each bus holds about 100 people. All are full as they pull away from the curb. Some passengers routinely face closed doors and are left at the curb. They begin the next line, which forms within seconds. Another 100 passengers. By the end of the day, an estimated 100,000 people will have travelled the line either on B-Line or some other east-west buses in this corridor.

Since the 1990s, there has been talk about a better transit solution – a rapid-transit line along Broadway or close to it. But there's a new vigour to the debate because city council this month passed the ambitious Transportation 2040 plan to boost foot, bike or transit trips from the current 44 per cent to two-thirds over the next 28 years.

Despite the fanfare, the plan doesn't work without rapid transit on Broadway, officials say. That has lately spurred Vancouver Mayor Gregor Robertson to forceful advocacy for such a system, with the mayor suggesting the city's ability to function depends on getting this done as soon as possible. Even as he this week talked up a bid by the Federation of Canadian Municipalities to secure billions of new federal dollars for municipal infrastructure across Canada, Mr. Robertson got in a plug for Broadway rapid transit.

"Vancouver needs a strong east-west rapid transit spine," Mr. Robertson said in an interview. Without it, he said growth along Broadway – the second-busiest employment centre in the province after downtown Vancouver – could be compromised.

Mr. Robertson wants a SkyTrain running from Commercial Drive to Arbutus followed by 99B-style express bus service on to the University of British Columbia. "That's a no-brainer for phase one," he says. Phase two would be SkyTrain to the campus at some point.

According to TransLink, the cost would range between $1-billion and $3-billion for a full-fledged SkyTrain tunnel running the full 13.6 kilometres between Commercial Drive and UBC. (By comparison, the Canada Line is 19 kilometres.)

"The option the mayor has identified is within that range. The details need to be worked out," said Jeffrey Busby, manager of infrastructure planning at TransLink.

Finding means to pay for the line remains a puzzle that has yet to be solved. Mr. Robertson is hoping for some solution, agreed upon among other municipalities and the province, by early 2013. Mr. Busby says once there is a deal, it would take five to seven years to engineer and actually build the system. Trains could be running by 2020.

Mr. Robertson is mindful of the fact that Canada's other largest cities have venerable subways along their east-west corridors. "Most people have built rapid transit before it got to this stage," he said. In Toronto, it's the Bloor-Danforth Line. Montreal has long had subway service along Ste-Catherine Street in its downtown core. "Bigger cities have dealt with this long ago."

Daniel Vigue doesn't have much time to talk. He's in line for the next 99B bus, arriving soon. The 27-year-old is heading for Vancouver General Hospital where he has a supervisory job.

If there was SkyTrain, he would be speeding west towards a stop near the hospital, one of the largest employers along the corridor. He expects such a system would be popular and widely used.

While Mr. Vigue says he sees a basic efficiency to the transit status quo, he notes that it's far from perfect. "I do hear a lot of complaints about the B line – general stuff. Sometimes it gets crowded. People do get inconsiderate on the buses."

Then it's time to go. His 99B has arrived, the doors are open and the line is moving.

Bring on the transit construction, and bring on the system. That's the view of Jules Francisco, manager of Oscar's Art Books, which has been in business for 23 years.

Cut-and-cover construction of the Canada Line was a nightmare for many businesses along the Cambie stretch of the route. While Mr. Francesco is mindful of those stories, he is sanguine about some form of rapid-transit construction along Broadway.

Buses have been good for Oscar's, he says. There are stops including one for 99B just outside the store. Buses feed customers to the store, with some shopping while awaiting transfers. "You can easily run out of the store if the bus is coming," he said. "We get a lot of traffic from the bus."

He says rapid transit would funnel more prospective customers into the area than the current status quo of buses. "It's a welcome and necessary thing to have a subway. Instead of protesting it, go with the change and cope with it. It's important to the infrastructure of our city," he said. "The question is why they haven't done [Broadway rapid transit] 30 years ago."

Mr. Robertson's transit plan calls for some kind of station or other major structure at Broadway and Arbutus that would be a transition from underground transit to express buses.

It's a concept Carrie Riches takes a lot of interest in as a member of the Kitsilano Arbutus Residents Association and a resident of the area for 26 years. Ms. Riches says the 99B buses have provided good transit for the area, and that she isn't averse to some kind of enhanced system. "My kids need to get around the city," she noted.

However, she says it's important for the city to dial residents into their plans as soon as possible so both sides can work on major changes to the currently low-key intersection that could face massive changes. "Transportation centres are part of the fabric of daily life. But we have to think about how to make them work," he said. "We need to come up with a plan that fits the neighbourhood."

As an associate vice-president of the UBC students society, Tanner Bokor makes the case for better transit to the main campus. He had a year of taking the 99B bus to campus from Commercial Drive to get up to speed on the problem he is trying to solve.

"You kind of feel like a sardine. At peak hours, you've got people shoved up to you," said Mr. Bokor, also a member of Get on Board B.C., a coalition promoting better regional transit whose members include Mr. Robertson and other area mayors. He remembers falling over in the connecting area between the two lengths of the bus. He was never injured. He used to cope by donning his iPod and cranking up the music. "It's not a pleasant experience."

He says it's a larger issue than just the ride to UBC. The bus loop on campus where passengers arrive and depart on various buses is chaotic, he says.

While encouraged by Mr. Robertson's rapid transit advocacy, he says he doesn't agree with SkyTrain reaching only partway to UBC. "We do not support sectioning. We need something that goes the entire way."

It's not just a student concern. Pascal Spothelfer, a UBC vice-president, said the administration's official policy calls for SkyTrain to replace a "sub-optimal" bus system. "What we don't want is a solution that continues to involve the buses because it will ultimately not solve the problem." 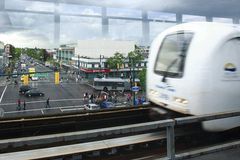 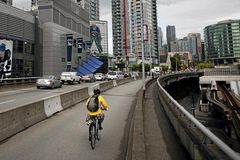 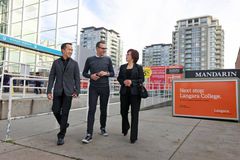 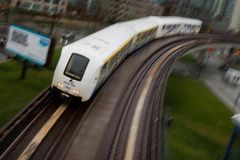 Oakridge mall reimagined as a ‘real city’ all its own
November 4, 2012 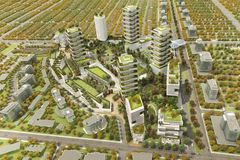