A rare white-coloured bear cub that has wandered back to a small town in southeastern B.C. to feast on the community's garbage will not be euthanized, conservation officers say.

"We are looking at alternate solutions here … perhaps a sanctuary placement or relocation," Sergeant Joe Caravetta said on Thursday. "I'd say one of the options is going to happen for sure."

Sgt. Caravetta said a trap has been set for the cub, which was first spotted alongside its sibling, also white-coloured, near the small community of Elkford, B.C., in 2011. At that time, officials said the bears had to be relocated because they had become bolder in their search for food and posed a public safety risk.

Now, however, one of the cubs has returned.

"Well, she's back," Duncan McDonald, Elkford's public works director, said in an interview on Thursday. "She's been back now for about a week, week and a half, and she's getting herself into trouble in the garbage again."

Mr. McDonald said town residents have probably become a little careless in storing their garbage since the bears were moved. "Because we haven't had any bears yet this year, people have probably forgotten to keep their cans in garages or sheds to make it tougher for her to get at them," he said.

"We've put out reminders to get people to please put their cans away, and then for people who have no other recourse – if they don't have a garage or a shed – we have purchased a few bear-resistant bear cans, which we're trying to disperse out to those people who really need them where the bear's coming back repetitively."

The white-coloured fur of the black bear cub is caused by a recessive gene, Sgt. Caravetta said, and is not a sign that the cub is linked to B.C.'s Kermode bear, also known as the "spirit bear," which are associated with coastal areas such as Terrace and Prince Rupert.

Sgt. Caravetta said officers do not attempt to relocate many black bears because the population in B.C. is very healthy, and a high percentage of bears that are moved return to their home territory or become problems in other communities. Multiple attempts to relocate black bears are very unusual, he said, especially if they have been feeding on garbage.

"Once a black bear becomes a feeding-on-garbage bear, the chances of a successful relocation, as in this case and in other cases we've done in the past, are very slim," he said. "Therefore, we have to take the unpleasant task of euthanizing the bear."

However, because of the cub's unique colouring and community interest, Sgt. Caravetta said, conservation officials are taking extra steps to try to find the bear a home, either in B.C. through another relocation attempt or potentially outside the province at a sanctuary.

The officer said the return of the cub is further proof that people need to be more careful in disposing of or storing their food. "It's a very simple concept. No food, no bears. A bear's not going to sit in somebody's yard if there's nothing there to eat. It's really an extremely simple concept."

As for the other cub, Sgt. Caravetta said they do not know where it is. "We had a report that one of them had been seen in the Kananaskis area of Alberta, [but] we never did get confirmation." 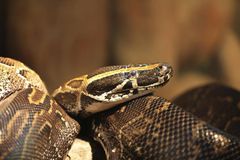