Health authorities have lifted the ban on raw B.C. oysters, meaning they could return to local restaurants as early as this weekend after spending more than a month on ice.

Since Aug. 12, local health authorities have required restaurants to cook B.C.-harvested oysters before serving them to customers, citing an increased risk of Vibrio parahaemolyticus infection this year due to hotter-than-average weather.

Vibrios are naturally occurring bacteria that tend to flourish as water gets warmer in summer. Symptoms include diarrhea, cramps, vomiting and fever, all of which can last up to a week.

The lifting of the ban comes as welcome news to B.C.'s oyster bars and seafood restaurants, many of which have taken a significant hit in the past five weeks. While most such restaurants supplemented their menus with East Coast oysters, those oysters cost more – and have a different flavour.

Frank Pabst, executive chef at Vancouver's Blue Water Café and Raw Bar, said his restaurant in the past month averaged less than half of the roughly 550 oysters per night it would typically sell.

"People from out of town, especially, want to enjoy local oysters such as Kusshi and Sawmill Bay oysters," he said.

"Oysters aren't necessarily an appetizer; it's just like a little add-on for a guest before they start with a meal, when they have a cocktail or a glass of sparkling and order a plate of oysters while they keep looking at the menu. [During the ban], they just skipped this course, basically."

Several B.C. restaurants have said they could have raw local oysters back on the menu by this weekend, though some are choosing to hold off until they get through their inventories of East Coast oysters.

Dr. Paul Hasselback, chief medical health officer at Vancouver Island Health, said while this form of shellfish poisoning does occur every summer, B.C. had not seen it to this magnitude in more than a decade.

The B.C. Centre for Disease Control (BCCDC) has recorded 12 to 39 cases of Vibrio parahaemolyticus per year in the last decade; this year has seen between 60 and 70, Dr. Hasselback said.

The Canadian Food Inspection Agency, which last month also issued a recall for all oysters harvested before Aug. 18 and intended for raw consumption, confirmed on Thursday that oysters harvested after that date are safe to eat if they have met food safety requirements.

Roberta Stevenson, executive director of the B.C. Shellfish Grower's Association, which represents about 70 per cent of shellfish growers in the province, said she will be meeting with health authorities, the BCCDC and various food-inspection agencies to discuss how to avoid a similar situation in the future.

Many shellfish suppliers had insisted their oysters came from deeper, cooler waters and were safe to eat raw, and said that it was unfair for all companies to be painted with the same brush.

"We want to avoid doing this again, obviously," Ms. Stevenson said. "The communication lines were very poor. If someone does get sick, we need to trace that back to where the illness came from. To just say all raw oysters from any source are evil is pretty unfair."

The ban did considerable damage to the B.C. oyster brand, Ms. Stevenson said, adding that about $50,000 worth of B.C. oysters go into the city of Vancouver each day.

Growers agree to test more oysters to get product back in B.C. market
August 23, 2015 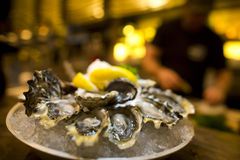 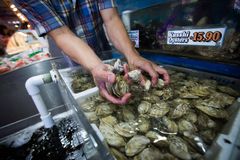