Police have concluded their search of a rural property for the remains of Nicole Hoar, near where the young tree planter, who disappeared on the "highway of tears" seven years ago, was last seen.

Police would not say if they have located any human remains. They said they need time "to determine the significance of any items collected."

Throughout the weekend, investigators excavated dozens of sites in densely wooded sections of the two-hectare property, climbed down an old well and scoured a nearby dump, while dogs trained in detecting human remains were led through the area for two days.

"I can say a previous owner of the property is a person of interest, he has previously been spoken to by police," Cpl. Annie Linteau of the RCMP's "E" Division said in an interview Sunday.

She would not say if former property owner Leland "Chug" Switzer is a person of interest in the case. Mr. Switzer is currently serving a life sentence for killing his brother just days after Ms. Hoar's disappearance.

Police, however, are appealing for the public's help in locating a man they believe may have information about Ms. Hoar's whereabouts during the weekend of June 21-23, 2002, when she disappeared.

Although the man has not been labelled a suspect, they are seeking a Caucasian male who would now be in his early 60s. At the time of Ms. Hoar's disappearance he had black, shoulder-length hair, a skinny face, sunken eyes, scruffy appearance and glasses. The man was a smoker and had a pronounced jagged scar on the left side of his neck.

Police began their search for evidence at the Pinewood Road property in the District of Isle Pierre last week. They have not commented on what brought them to the site, but the lead came out of the broader investigation into missing women along what is known as the Highway of Tears.

At least 18 women have been killed or have disappeared on the stretch of highway between Prince George, in B.C.'s central interior, and Prince Rupert on the coast. Isle Pierre is about 30 kilometres west of Prince George.

Thirteen of those cases have been determined to be homicides - the women's bodies have been found - and with the exception of Ms. Hoar, all the victims have been native women, many of them in their teens. The cases date between 1969 to 2006 and are now the subject of an investigation the RCMP has labelled E-Pana.

"Police will continue to investigate the 2002 disappearance of Nicole Hoar as well as the disappearance or homicide of the other 17 women whose circumstances have been the focus of E-Pana investigators," read a statement from the RCMP, released Sunday afternoon. Investigators say all the cases "are progressing very well."

Ms. Hoar, a 25-year-old from Red Deer, Alta.a, was hitchhiking on Highway 16 just outside of Prince George, heading to Smithers, B.C., to visit her sister. Signs along the highway now warn women against hitchhiking.

Advocates for the missing say the number of victims is far higher than 18. To date, the RCMP have not indicated they have any leads on the property that might point to other missing persons cases.

Cpl. Linteau said police are following up on more than 100 recent tips in relation to Ms. Hoar's disappearance.

Those tips led to an investigation on the weekend of a site that locals have used as an unauthorized dump.

Cpl. Linteau said the search at the dumpsite was wrapped up Saturday, although they are still working to trace the owner of an abandoned pickup truck found there that has been singled out for forensic testing.

The search mostly focused on the Pinewood Road property. The current owner, Robin Tomah, is not a suspect and she was moved to a hotel for the duration of the search. She will now be allowed to return to her mobile home on the property.

At a nearby pub, in the Bednesti Lake Resort, bartender Alan Checkley said residents have been urging police to look at the property for years.

He said he played pool with Mr. Switzer on occasion before he was jailed in 2004, but he was "not someone I would call a friend … Just one of those guys you meet, you don't turn your back on them." 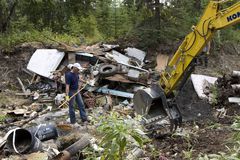 Follow Justine Hunter on Twitter @justine_hunter
Report an error
Due to technical reasons, we have temporarily removed commenting from our articles. We hope to have this fixed soon. Thank you for your patience. If you are looking to give feedback on our new site, please send it along to feedback@globeandmail.com. If you want to write a letter to the editor, please forward to letters@globeandmail.com.
Comments