A provincial government decision to reject an offer by Telus Corp. to pay nearly $2-million a year for naming rights to BC Place stadium doesn't make any financial sense, says an expert on sports marketing.

"When you look at naming-rights deals throughout North America, it actually competes with the best of them," said Tom Mayenknecht, a principal with Emblematica, a Vancouver-based company specializing in brand management.

Naming rights for the Air Canada Centre, home to the Toronto Maple Leafs and Raptors, are worth about $1.5-million a year, and the Bell Centre, base of the Montreal Canadians, brings in about $2.5-m annually, he said.

Had the BC Place deal gone ahead, it would have brought the government $35-million over 20 years. Those numbers compare favourably across North America, said Mr. Mayenknecht, when the size of the local market and the number of big events held annually in the stadium are factored in.

"It compares with the two largest naming rights deals in history, which are Citi Field, in Queens, New York [where the New York Mets play]… and the Barclays Centre, which opens in Brooklyn next year," he said.

Naming rights to those two fields cost the sponsors about $20-million a year each, "but in a market ten times the size" of Vancouver's, he said.

"The other top deal is the American Airlines Centre, in Dallas, which is $6-million a year, but its got a baseline of 82 major event nights with the Dallas Stars and the Dallas Mavericks, compared to 10 CFL dates and 17 MLS dates at BC Place," Mr. Mayenknecht said. "So no matter how you cut it, per capita and even in absolute terms, it [the proposed Telus deal]compares with the best naming-rights deals in North America."

BC Place, recently renovated by the government for $563-million, has long been home to the CFL BC Lions and, starting this year, will also be used by the Vancouver Whitecaps, a MLS soccer team.

Mr. Mayenknecht, who hosts The Sport Market on Team 1040 radio, a Saturday morning show that dissects the business of professional sports, felt sure a deal was about to get done last year.

Telus had had extensive negotiations with the B.C. Pavilion Corporation, the Crown agency that manages the stadium, and a naming deal seemed imminent last spring.

Telus, which, during the renovations, made BC Place Canada's first all-digital stadium by installing 500 kilometres of fibre-optic cable, 800 Wi-Fi access points and 1,150 high-definition digital screens, was so confident it had even made new signs for the building, worth an estimated $1.8-million.

But Mr. Mayenknecht said the deal went sideways after PavCo sent a proposal to cabinet for approval last year, shortly after Christy Clark became Premier. Since taking office, Ms. Clark has distanced herself from the previous Liberal leader, Gordon Campbell, who had approved the massive BC Place renovations.

"It's such a fascinating story at two levels. No. 1 is the actual substance of the deal that has been rejected. But the second thing is the way the government has handled this," Mr. Mayenknecht said. "Cabinet has taken nine, 10, 11 months … to deal with this issue and obviously the politics of it have trumped the commercial merit of the deal."

"We have very few head offices in British Columbia. Telus is one and is arguably the largest private-sector employer in the province. And they stiff them with a $1.8-million sign? … This is just sheer incompetence," Mr. Dix said. "I mean, if they told them two years ago they didn't want to do the naming thing, they wanted it to stay BC Place, they wouldn't have had a problem."

Editor's note: Tom Mayenknecht meant to estimate the naming rights for the Bell Centre, in Montreal, at about $2.5 million annually. An earlier version of this story was incorrect, this version has been ammended. 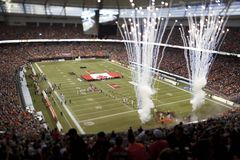 Residents rally against invasive light from digital signs outside BC Place
January 18, 2012 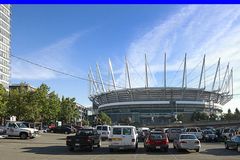