She had been holding back tears for hours, but when she saw her mother finally come toward her at Vancouver International Airport, Merell Awad began to weep with joy and relief.

"You're here, you're here," she cried, laughing as she hugged her mother and then her sister, her sister's husband and the couple's two boys before doing it all over again.

The tearful greeting marked a milestone for Ms. Awad, a Campbell River resident who has long wanted to bring her family to Canada and to the private sponsorship group that has helped make that dream come true.

The church is part of the Anglican Diocese of British Columbia, which is a sponsorship agreement holder approved by the federal government. For the past year, the Campbell River group has been raising money to provide food, clothes and housing for Ms. Awad's family.

The family, formerly residents of Latakia, Syria, wanted to leave the war-torn country and join Ms. Awad in Campbell River, where she has lived since 2009 and runs a restaurant called BaBa Gannouj with her husband. On Tuesday, five of those family ‎members arrived: Ms. Awad's mother, who is in poor health and uses a wheelchair; her younger sister and her husband and sons.

Another sister and her family – a husband and two daughters – remain in Syria. Their applications to come to Canada are pending.

Private sponsorship groups spend months doing paperwork, raising funds and getting ready for newcomers, a task made challenging by uncertain schedules. In Campbell River, for example, the sponsorship group recently rented two apartments, but let one go when it became apparent that it could take longer than expected for all of Ms. Awad's family to arrive.

The federal Liberal government has committed to process all Syrian applications to be privately sponsored refugees that were submitted by March 31 by the end of the year or beginning of next.

Private sponsorship groups are expected to support new arrivals for a year – a commitment that, for Ms. Awad's extended family, amounted to about $150,000.

The group is still raising money. The next event, a garage sale, is scheduled for June 11.

Ms. Awad hopes her other sister can join her soon. As Ms. Awad waited for her family members to arrive, her sister who is still in Syria sent her text after text, checking on the progress of the travellers.

"They are all flying, but my heart is on the ground," she told Ms. Awad when the group left Frankfurt.

After a few hours in the airport, Ms. Awad and her newly reunited family planned to catch a plane to Comox.

The plan had been to stay in a hotel overnight and travel to Campbell River in the morning, but Ms. Awad could not wait to get them home. She has her sister's fridge stocked with fruit and fresh tabouleh and members of the sponsorship group have stocked the shelves, made the beds and put out a call for scented shrubs to plant in the front yard.

For Ms. Awad, the joy was overwhelming, tempered only by her wish that her other sister could join them.

"I hope that happens soon," she said. "All of my life it has been my sisters and me – all of us are here now except her."

Opinion
Our two-tiered refugee system: Among the chaos, I found immense generosity
May 16, 2018

Opinion
Canada’s new strategy pays off with a seat at the Syria table
May 16, 2018 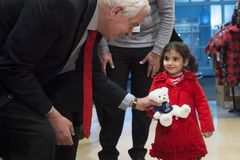