Adriane Carr gets steamed while she examines a detailed map of downtown Vancouver's West End.

The map reminds Ms. Carr of the frustration she felt in June, when the Vision party-dominated Vancouver city council approved the rezoning of the former St. John's United Church site to clear the way for a high-rise. "It just doesn't fit with the historic plans for the West End. It's just too tall and too dense," said the city councillor, who voted against the rezoning application by Westbank Projects Corp. to construct a 22-storey rental apartment in the Nelson Slopes district of the West End.

The West End, once home to the highest population density in the City of Vancouver, has trailed many other neighbourhoods in growth over the past 40 years but is now under pressure to welcome a flurry of new towers. Other areas such as Yaletown have grown by leaps and bounds while the West End has slipped to become the fourth-most densely populated. Last year, there were more than 44,500 West Enders, or 7.4 per cent of Vancouver's total population of 603,502, according to census data. In 1971, the West End's population exceeded 37,500, or 8.8 per cent of Vancouver's total then of 426,260.

A recent city-sponsored meeting about the West End's future took place at a hotel on Davie Street, near the construction site for the 21-floor Alexandra condo tower, including two retail levels. The Alexandra has faced criticisms, though the Westbank project at 1401 Comox Street stands out because it isn't on a major arterial road such as Davie, Denman or Robson.

Ms. Carr and her husband bought a West End condo in a four-storey building west of Denman Street six years ago, lured by the location being within walking distance of Stanley Park. She is an advocate for preserving low-rise apartments where possible, including many that went up during a construction boom from the late 1950s to early 1970s.

The former B.C. Green Party leader notes that the approval for Westbank and its partners came during the early stages of city hall's 21-month process to produce a community plan for the West End. City council gave the rezoning go-ahead in June, knowing a broader vision for the area would not be ready until late 2013. "When you approve something like 1401 Comox that is not keeping with current zoning, it sets a precedent that could influence the community plan itself," Ms. Carr said.

The 112-block neighbourhood also has its heritage charms. The historic Sylvia Hotel on English Bay, built in 1912 as an eight-storey apartment, was the tallest structure west of Burrard Street until 1958, for instance. The West End is bounded by Stanley Park, West Georgia Street, Burrard Street and English Bay.

Critics are worried about what looms on the horizon. "We have enough high-rises in the West End," said Gwen Green, an 89-year-old resident who has lived in the district since 1988. Another local citizen, Patrick Canny, hopes there will be specific height limits on quieter streets, such as replacing aging four-storey buildings with new structures no taller than seven storeys.

Holly Sovdi, the city's lead urban planner in the West End community policy process, proudly wore a purple T-shirt during a recent open house for residents. He said the colour represents inspiration and diversity, whether it's gays and lesbians who contribute to the area's character or low-rise apartments that dot leafy streets. "When you talk about increases to density, that causes a lot of controversy right off the bat," Mr. Sovdi said. He pledges that as the community plan takes shape, the city will treat the West End as a vibrant place to work, shop and play, not a concrete jungle to ram through high-rises. 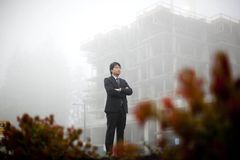 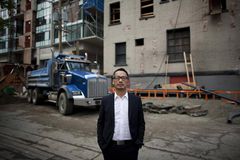 Vancouver dairy farmhouse takes on new life as part of residential project
May 9, 2018 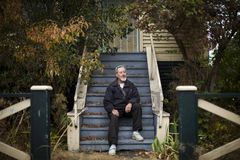