Attempts to introduce a bylaw restricting the size of houses built on farmland have failed before in Richmond, but the municipality is looking at the issue again as frustrations mount over the loss to development of some of the best agricultural land in the province.

An investigation by The Globe and Mail has highlighted the problem of how Richmond and other municipalities are seeing farmland gobbled up by extremely large luxury homes despite being in the Agricultural Land Reserve (ALR), which makes the preservation of farmland a priority.

Richmond Mayor Malcolm Brodie said the city has tried to tackle the problem in the past but couldn't find broad support for a bylaw restricting house size.

"We did take a look at that a couple of years ago, and it turned out after we went through a lot of consultation it wasn't going to be feasible," Mr. Brodie said. "In the political sense there was a lot of pressure from the owners of the agricultural land not to do it."

Mr. Brodie said Monday the provincial government may have to step in to help municipalities deal with the problem.

"We have asked the province to consider province-wide regulations," he said. "It's not the first time we've asked them, so we'll see how it goes."

He said it is not just residential development that is encroaching on Metro Vancouver farmland, but industrial development and port expansion as well, spurred by provincial plans to replace the Massey Tunnel with a bridge.

Richmond Councillor Carol Day said her municipality isn't the only one where farmland is being used for residential purposes rather than producing crops.

"It's not just in Richmond. I recently drove out to Surrey and I couldn't believe some of the houses on [farmland]," she said. "This is insane. We've got to do something. … This is the best farmland in Canada, and we are just letting it go to waste."

Councillor Harold Steves, who is also a farmer, said he would raise the issue with the Richmond planning committee on Tuesday. Mr. Steves said that over the years he has tried to get a bylaw passed that would restrict the size of homes on farmland, but the efforts have always failed because of opposition from local realtors and developers.

"I'm hoping council will be ready to pass a bylaw now," he said. "I'm going to suggest house size and I'm also concerned about foreign ownership. A lot of this is offshore money … and I think if you took that out of it, it would have a major effect."

Nathan Pachal, a Langley city councillor, agrees that the trend of megahomes springing up on agricultural land is widespread.

He said local governments are responsible for zoning, but only a handful of municipalities – Delta, Port Coquitlam and Surrey – have passed bylaws restricting house sizes.

He said the province has an important role to play because it controls property taxes. "The real change has to come at the provincial level because it's a tax issue," he said.

A 2015 Metro Vancouver report says property taxes vary across the region, but the differences are significant for those who have homes on farmland. For example, in Burnaby, the owner of a home on four hectares of land classified as a farm would pay $973 in property taxes; the same home on land without farm classification would pay $17,566.

Mr. Pachal said it is "time to crack down on non-farm uses within the Agricultural Land Reserve."

But B.C. Agriculture Minister Norm Letnick has indicated it is up to the municipalities to take action. In a letter to Mr. Brodie last month, Mr. Letnick said the "powers to set land use and zoning bylaws to regulate the siting, size and location of residences rest with local governments, even for parcels of land within the ALR."

As Mr. Brodie indicated, the government has been asked for help before. In 2012, Metro Vancouver asked the province for regulations to control the size of houses on farmland, saying that if only a few municipalities have such regulations, "this type of development may simply go to another municipality in the region." Metro Vancouver urged the province "to assert its leadership to encourage ongoing and future farming province-wide," but the regulations were never introduced. 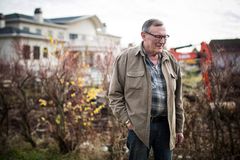 B.C. minister says province will act ‘quickly’ to close tax loopholes on farmland
November 21, 2016
B.C. tax loopholes turn farming into foreign investing
November 21, 2016
B.C. says local council responsible for regulating residential use of farmland
November 20, 2016
Follow Mark Hume and Kathy Tomlinson on Twitter @markhumeglobe @KathyTGlobe
Report an error Editorial code of conduct
Due to technical reasons, we have temporarily removed commenting from our articles. We hope to have this fixed soon. Thank you for your patience. If you are looking to give feedback on our new site, please send it along to feedback@globeandmail.com. If you want to write a letter to the editor, please forward to letters@globeandmail.com.
Comments