B.C. students and their parents joined teachers on the picket line, signed up for impromptu drop-in camps and scrambled to find last-minute child care on the first of four days of a rotating strike by public school teachers. But the growing acrimony on both sides of the labour dispute has meant doubt about what's ahead for final exams, graduation ceremonies and potentially even summer vacation.

Teachers are staging walkouts in different districts until Friday to back their demands for a 13.7-per-cent pay increase over four years, while the government's bargaining agent is offering 7.3 per cent over six years. At the heart of the dispute are two court rulings that have slammed the government's decision to remove contract language on class size and composition.

In the ensuing battle for public opinion, the government has announced a partial lockout in response to the teachers' strike action, leaving both sides to argue over whether students' futures will be affected.

John Puddifoot, a Vancouver parent with two high-school aged children, says he's frustrated that students are caught in the middle of an "adult dispute."

"It tends to put parents and kids in the middle, especially kids who are at risk in lower-income families, because quite often those are the families who cannot afford to take a day off work when this type of thing happens," Mr. Puddifoot said. "We want an equal education system, but this is not having an equal impact across income levels."

Jim Iker, the president of the B.C. Teachers' Federation, says the union is waiting to see how negotiations progress before deciding whether to continue their job action next week. The two sides met Monday afternoon, with more talks scheduled for Tuesday and Wednesday.

"We've said that it would be decided on a week-to-week basis," Mr. Iker told The Globe and Mail. "We need to see some willingness on the government's part to move on the key issues of class size and class composition and minimum specialist teacher levels in the collective agreement, and so far they've shown no indication. They want to keep the status quo."

The B.C. Ministry of Education says the partial lockout – which prevents teachers from being at school more than 45 minutes before or after class – won't have any impact on graduation ceremonies or the marking of end-of-the-year exams. Graduating students need their exam marks to get accepted to university programs.

But if the labour strife continues, it could cut into the minimum number of instructional hours that school boards are required to provide – and that might mean students and their teachers would have to make up the extra time during the summer break.

The provincial School Calendar Regulation legislation requires school boards to provide children in kindergarten with 853 hours of instruction. Those in Grades 1 to 7 must spend a minimum of 878 hours in class, while Grade 8 to 12 students are required to receive 952 hours of instruction.

Under the School Act, the government has the power to exempt school boards from these regulations in the event of a labour dispute. But the ministry says it's too soon to know whether it would use that power.

"Given the current labour dispute, it is likely that government will assess the situation near the end of the school year and provide further direction to school districts in due course," ministry spokesman Robert Pauliszyn said in an e-mail.

In a ruling this year, the government was ordered to reinstate the class size and composition provisions that were deleted in legislation in 2002. The government is appealing the court ruling, saying the move would cost taxpayers $2-billion.

The BC Confederation of Parent Advisory Councils says children and their families are confused by the mixed messages they are receiving about what the job action will mean for students.

"Will there be extracurricular activities or not? We don't know. So that is frustrating."

Parent Christy Thomas, whose 10-year-old daughter was heading to gymnastics camp for the day, brought teachers banana muffins and said she felt like the government was "acting like bullies."

"I've just been shocked at the kind of tactics in the background and my eyes are just becoming opened to the politics involved here. I find it shocking when you're dealing with the children."

Teachers in Vancouver and 15 other districts – including New Westminster, Mission and Vancouver Island North – walked off the job Monday. Picket lines at some schools were sparsely populated.

The teachers were joined by BC Federation of Labour president Jim Sinclair, who said the labour movement does not support legislating teachers back to work. Mr. Sinclair said that if the government tries to table such legislation, "they're going to be dealing with the entire labour movement." A group of students at Dr. Charles Best Secondary School in Coquitlam staged their own walkout, decrying a lack of funding to the education system.

On Tuesday, another 15 school districts will be behind picket lines, including Richmond, Langley, Nanaimo and Prince Rupert.

Walkouts will take place in Greater Victoria, as well as 13 other districts, on Wednesday, while Thursday's closings will affect students in 14 districts including Surrey, Burnaby, North Vancouver, West Vancouver and the Sunshine Coast.

See the full list of districts affected by this week's strikes here. 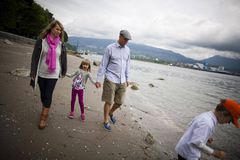 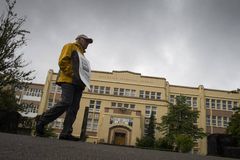