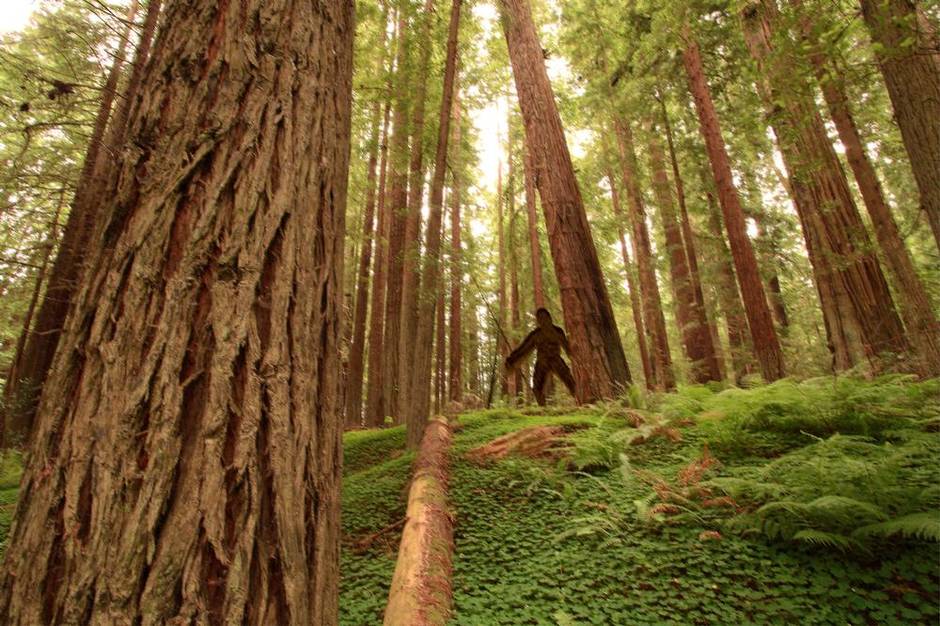 Every few weeks, members of the B.C. Scientific Cryptozoology Club head into the wooded hills around this resort town – pins on their backpacks reading “Sasquatch research” – looking for proof of something that few people think is there.

For a quarter century, the club’s hobbyists, scientists and other laymen have passed through Harrison Hot Springs and continued the search they have mounted for longer than any other group in Canada.

In the village, they’ve found a local population that has embraced the mystical creature said to be living in the dark hills around the fjords that ring Harrison Lake. Statues of angry gorilla-like creatures and grandfatherly apes dot the town, linked by painted footprints and colourful kitsch.

The club’s members walk through thick moss on the unorthodox quest of cryptozoology, looking for animals that remain hidden. At the top of their wish list: the Sasquatch – better known as Big Foot in the United States. A centerpiece of First Nations lore, the Sasquatch’s likeness has been captured by centuries of masks, totem poles and stories.

While their choice of hobby might raise eyebrows, the club’s members are a skeptical lot. When sightings are reported, a researcher is dispatched often within hours. Instead of rifles, they pack cameras, notebooks and plaster to make castings of any footprints they might run across. The scientific method is at the centre of their thinking and they roll their eyes at the paranormal.

Adam McGirr has been with the club for most of its existence, joining when he was 14 years old. For more than a decade, he has taken any opportunity to make the two-hour drive from Vancouver to Harrison Hot Springs. 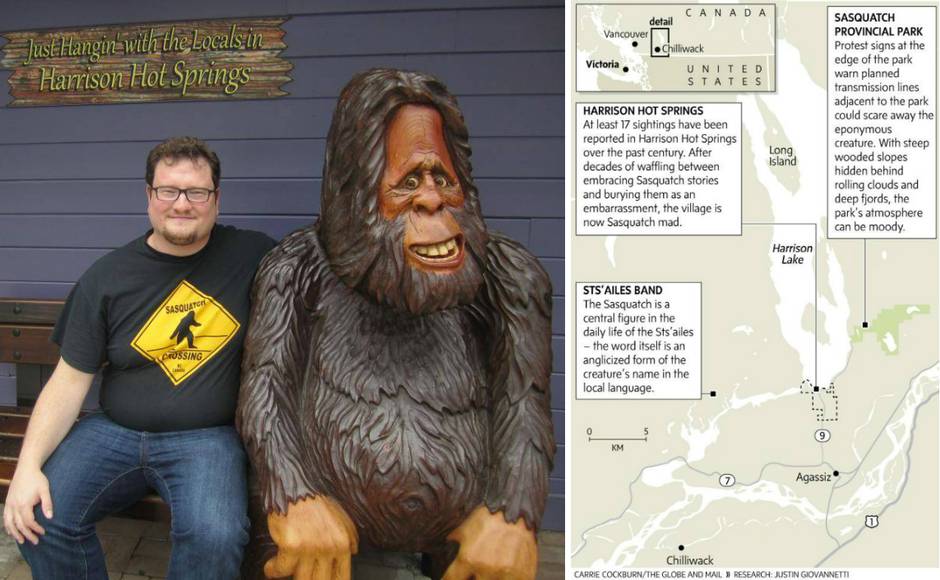 The search for the Sasquatch has been ‘an all-consuming hobby’ for Adam McGirr, shown with Sasquatch Carving No. 3. (Adam McGirr)

The search for Sasquatch has been “an all-consuming hobby,” says Mr. McGirr, ruining a number of marriages in the club. While BCSCC members would be overjoyed to capture a Sasquatch on video and have it authenticated, he says they would be equally pleased proving Sasquatch to be one of the greatest hoaxes of the past century.

The Sasquatch is said to make “blood-curdling” howls, according to Mr. McGirr. Wood knocking is believed to be the main way the creatures communicate over long distances. Large pieces of wood, the size of century-old trunks, are hit against towering trees. There is a belief that the creatures would be omnivores, much like the mountain gorilla.

“I don’t go around admitting this, but that day I understood the fear people have. I felt very small all of a sudden.”

There has been a spike in interest due to a popular show on Animal Planet, Finding Bigfoot.

The show follows four researchers looking to prove the existence of Sasquatch. Nearly every segment ends with a snapping twig or wood knock, sending the researchers scurrying.

While they appreciate the renewed attention, the Canadian researchers struggle to find polite ways to describe the American show.

Ape of many names 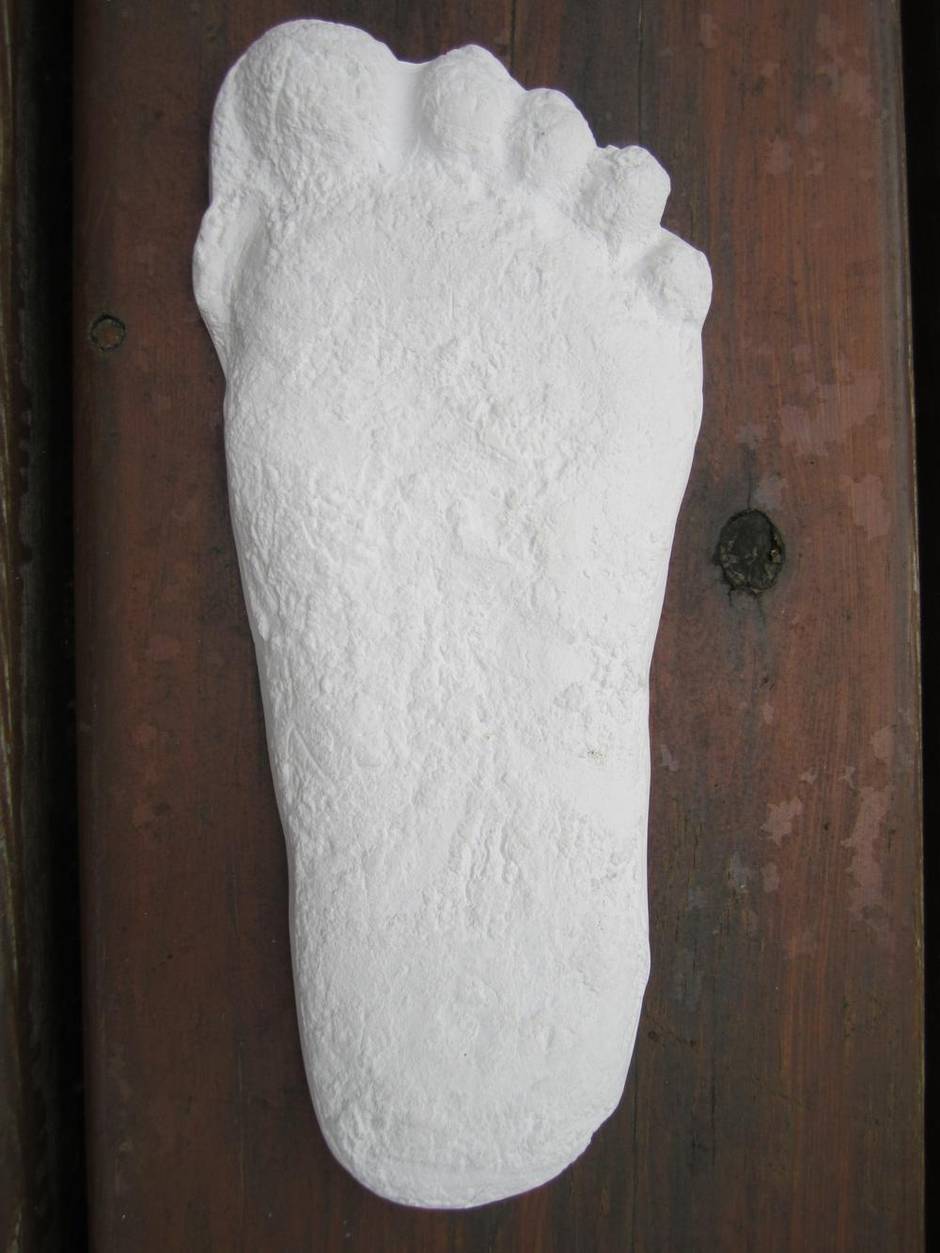 While he and other researchers might never find something in the hills around Harrison Hot Springs, they’ve created and nurtured a community of like-minded people in the unlikeliest of places.

While the Sasquatch is well known in North America, stories of large, hairy man-like apes are found in folklore around the world.

The most famous is the Nepalese Yeti. With a thick white coat, the Abominable Snowman is also known in India as the Bandya.

In Australia the creatures have a brown coat and are known as the Yowie in Aboriginal legend. With a large, wide nose, they are large, timid and hairy.

The Chinese legend is the Yeren, the man-monkey with reddish hair. Somewhat smaller than Sasquatch, the Yeren avoids conflict with humans. In Vietnam, the Batutut is said to be aggressive.

A similar creature with black hair is known in Japan as the Hibagon. In Russia, the local myth is the Almas.

In B.C., the coastal Kwakwaka’wakw have the legend of Dzunukwa, the bringer of wealth who is also a cannibal woman who ate children. She is often depicted as black and naked on totem poles with large breasts and pursed bright red lips.

Mr. McGirr has never seen a Sasquatch. But he’s worked with people like Bill Miller, who operates an outdoor adventure company in Harrison Hot Springs. Mr. Miller considers himself a Sasquatch hunter and says he’s come across the creature twice.

“A large biped ran by where I was fishing one night, I got enough of a view of it in the dark to see it go by,” Mr. Miller says of his first sighting in northern Minnesota in 1980. “I had no idea what it was at the time; I figured it was one big son of a gun.”

At the time, Mr. Miller says all he had seen was the famous Patterson-Gimlin film. Shot in northern California in October, 1967, the film depicts a female Bigfoot walking with a strange gait along a creek bed.

After decades, the shaky footage remains at the centre of Sasquatch lore and stands as the Sasquatch version of the Zapruder film of the John F. Kennedy assassination; it can be neither verified nor disproved.

Mr. Miller’s second sighting was in 2003 near Harrison Hot Springs – the Mecca of Sasquatch sightings, he says. While he was travelling up a mountain, he spotted a dark shape on a neighbouring peak and eyed it through a looking glass.

“I saw it and it shocked the hell out of me,” he says. “It was cinnamon brown, it was what I expected I guess. It was like the Patterson creature, just bigger across the shoulders and back.”

Echoing many other sighting stories, Mr. Miller says he became overcome with fear. “I don’t go around admitting this, but that day I understood the fear people have. I felt very small all of a sudden.”

In First Nation’s lore, spotting a Sasquatch is seen as a once-in-a lifetime experience. Across the water from Harrison Hot Springs lies the Sts’ailes Band. The Sasquatch word is derived from the community’s dialect and the band’s ubiquitous symbol is a stylized Sasquatch.

According to Chief Harvey Paul, many in his community believe in the creature. Backed by centuries of stories, many First Nations are not receptive to skeptics. “It’s a part of our history,” Mr. Paul says.

The chief says he believes the Sasquatch is probably extinct, but he believes the spirit still exists. Earlier this year, the Sts’ailes Band repatriated a mask carved by Mr. Paul’s grandfather in the 1930s. The mask, covered in bear fur and carved of alder wood, now sits at the centre of the band council offices.

“The last time they used it was 1939. It almost has gorilla-type features, but it has a flat jaw, flat nose and the hair that was put on it was bear fur,” Mr. Paul says. “He wore it for celebrations. He put a black bearskin on as the suit to make himself look like an animal and wore the mask.”

If a Sasquatch were found in 2014, it would not be the first time a creature long-thought to be a myth was discovered. 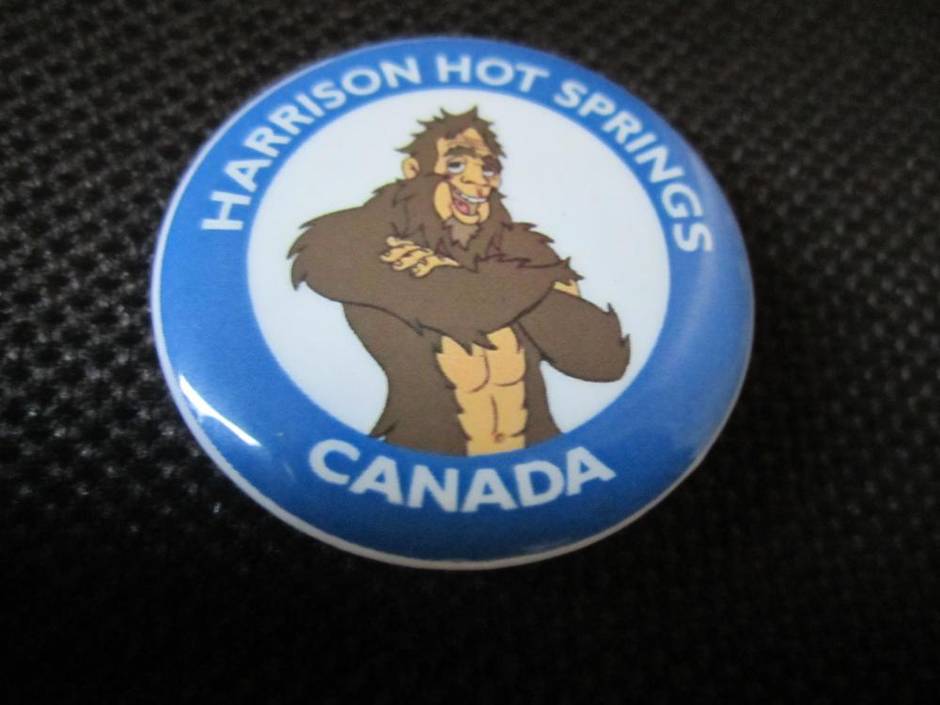 Cryptozoology’s greatest defence in the modern era is the discovery of the kraken, more accurately known as the colossal squid. With a stout body and hooks at the tips of its limbs, the colossal squid was “just a sailor’s tale” for decades, Mr. McGirr says.

More than 10 metres in length, with eyes nearly 30 centimetres across, a squid weighing nearly 500 kilograms was pulled from Antarctic waters by New Zealand-based fishermen in 2007. The squid was frozen and dissected.

While it wasn’t the first colossal squid seen, it was the largest yet to be pulled from the ocean and revealed much about the little-known creature.

A number of colossal squid beaks and tentacles have been found in the stomachs of sperm whales. The beak found in the New Zealand specimen was only a fraction of the size of some pulled from whale stomachs over the past century, indicating that the over two-storey squid was only an infant.

The B.C. club knows its odds are poor for finding hard evidence of a Sasquatch – despite the reported sightings, no bones, fur or scat has ever been found.

While they have faced setbacks and uncomfortable questions, searching will remain a hobby for people who spend their lives as bureaucrats, contractors and nightwatchmen. During their weekends, they will continue to study textbooks and refine their collection methods as citizen-scientists.

The grandfather of all Sasquatch research is John Green, an 88-year-old former mayor of Harrison Hot Springs and former journalist whose extensive collection of prints and research could form the central exhibit of a Sasquatch museum.

Mr. Green’s disciples are working with town officials to open a museum by next year.

Mr. McGirr says working the front desk of that museum would be his dream job.

Left on disability after winning a fight with Hodgkin’s lymphoma, Mr. Miller moved to Harrison Hot Springs never intending to devote his life to following Sasquatches in the woods.