The University of New Brunswick, citing academic freedom, is supporting a professor who claims that Asian immigration has damaged Vancouver.

In a statement issued Wednesday on sociology professor Ricardo Duchesne, a university vice-president said the school's mission and values support freedom of thought and expression while maintaining the highest ethical standards and a respectful environment.

Robert MacKinnon also said a complaint about the issue by Vancouver city Councillor Kerry Jang has been "carefully reviewed and addressed." However, the statement provides no detail on that process or outcome.

The university declined to provide more detail Wednesday or an interview with a university official.

Mr. Jang scoffed at the response, calling it "vague," and said he has never heard from the University of New Brunswick about the issue, which first flared up last summer when he became aware of Prof. Duchesne's views.

"I don't know if they actually did anything and this is just a way of defending a faculty member, circle the wagons," said Mr. Jang, who is also a professor of psychiatry at the University of British Columbia.

He said Prof. Duchesne is using academic freedom to hide poor scholarship. "He's only providing one view to students and shaping their minds," he said. "That whole academic enterprise of why we send our kids to school to become broad thinkers is not being upheld."

Mr. Jang also said Prof. Duchesne's views on Asian immigration to B.C. are simply untrue. "It really comes across as very white supremacist. That's just not Canada. It's a country of immigrants."

But Prof. Duchesne, on Wednesday, disputed Mr. Jang's views, noting that the university's dean of arts came to see him earlier in the day and upheld his academic-freedom rights.

This week, Prof. Duchesne was quoted by CBC as saying the influx of Asians and Chinese to Vancouver was "too fast, too quick," leading a "beautiful British city" to take on "a strongly Asian character."

In an interview from Saint John, he stuck by that view Wednesday, describing Vancouver as a city dramatically altered by Chinese immigrants. "Vancouver can still be seen as a city that still remains British in many areas, but also has this strong, growing Asian side. There is this two-faced character to the city," he said. "The fast pace of the change is bad."

Prof. Duchesne noted, in defending his perspective, that he is of mixed race, with a mother from Britain and a father from Puerto Rico, and said he teaches contrasting viewpoints to his own, using "an almost Marxist" textbook that talks about diversity, and the head tax, among other issues. He said academic freedom provides him the opportunity to think and "not to feel repressed" when he talks.

"One crosses a line into being a racist when you use mean-spirited words, foul language, degrading words in reference to other ethnic groups and cultures, which I never do," he said.

David Robinson, executive director of the Canadian Association of University Teachers, said from Ottawa that he expected the University of New Brunswick will be "risk averse" around this issue due to bad publicity. Still, he said he thought the university has "done the right thing" by essentially saying they looked into the complaint, found no substance to it, and that the professor in question has academic freedom.

"For some people, these are deeply offensive views and I understand that completely," said Mr. Robinson, whose association represents 68,000 members across Canada.

"But I think there's greater harm done if we suppress free speech and violate academic freedom than if we allow an individual to express his or her viewpoint in the broad light of day and allow the academic community and other researchers to look at the claims being made and determine whether or not they are supported by evidence."

Opinion
Are we still that compassionate Canada?
October 6, 2014 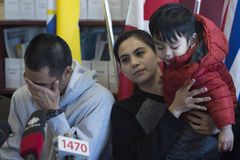