One of the last two remaining gas stations in downtown Vancouver is being put up for sale, as underused land in key city locations continues to spur redevelopment.

Chevron Canada Ltd. announced Tuesday it is "soliciting market interest" in three of its city locations, including the site at Georgia and Bidwell streets.

"It's become apparent to Chevron that the sites have a high and better value" for a development that makes more use of it than as gas stations, company spokesman Adrien Byrne said.

Even though the Georgia site is a high-volume sales location and gas sales continue to increase throughout the province, the land is likely more valuable to a developer than it is to Chevron, he said.

The company is also looking for offers for its sites at 39th Avenue and Dunbar Street, in Vancouver's much-desired west side, and at First Avenue and Clark Drive.

A new plan for the West End, approved in November, 2013, allows for much higher densities along Georgia and Burrard, which means the site of the station could become home to a tower as high as 385 feet.

"Land in the city is too valuable to be saved for a single use," said Anne McMullin, president of the region's Urban Development Institute. "It's far more lucrative for development than as a gas station."

David Taylor, a vice-president at the commercial brokerage Colliers, said: "There are so few sites downtown that anything that seems underbuilt is a target."

The changes to the Georgia corridor have already prompted development proposals within a couple of blocks of the Chevron station for four high-end condo projects with striking designs.

The company's decision to get rid of some properties is part of a local and national movement in which thousands of stations have disappeared over the past 25 years.

"There is an industrywide trend toward that divestment," said Michael Ervin, whose company Kent Group Ltd., based in London, Ont., tracks the refining and retail sectors of the petroleum industry.

Vancouver's business-licence database indicates there are 77 gas stations left in the city, with notations in the files that 16 others closed recently.

Downtown has only one other station besides the Chevron outlet on Georgia: the Esso station at Burrard and Davie streets, which was acquired by 7-Eleven two years ago when Esso sold off all its stations in British Columbia and Alberta.

Mr. Ervin said that, in spite of the drastic reduction, there is no sign of complaint from consumers that stations are getting harder to find in cities.

And Mr. Byrne said the West End, where the station is located, is "increasingly transit-oriented and walkable."

People who need gas as they're heading north of the city will still have many stations on the North Shore to choose from, he said.

Vancouver's downtown has experienced a remarkable building boom in the last 30 years. First, residential developers swarmed onto former industrial land around the edges of the downtown peninsula to build condos.

Then, after a long lull, commercial developers initiated a boom of office-tower building in the last several years.

As a result, vacant properties, former office plazas, and smaller buildings have all become prime sites for redevelopment.

Two sites downtown that have functioned as public plazas – one at Seymour and West Hastings streets, another at the key downtown Georgia and Granville streets intersection – have developments proposed.

Another site on West Pender Street at Richards Street that has been a parking lot for decades is being developed as a combined commercial and residential-rental building, as is another site on the same block. 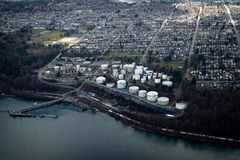 Changes to Vancouver’s Chinatown welcoming for some, wrenching for others
August 11, 2016