In light of the recent Environment Canada Snowfall Warning for Metro Vancouver and the South Coast, the City of Vancouver is doubling its efforts to pray for rain.

Environment Canada has issued a snowfall warning for Metro Vancouver and the Fraser Valley. Snow is expected to continue through the weekend, with accumulations of up to 20 centimetres in some areas.

"During the snowfalls and cold temperatures of December and early January, I have to admit, we were caught off guard," said Vancouver Mayor Gregor Robertson during an unrelated news conference on Thursday.

"If I had a chance to do it all over again, I would have started praying for rain much sooner. But that's hindsight," he said.

"With the forecast calling for more snow, I can assure you, the city is praying for rain like never before," Mayor Robertson said.

"I know that I was away on holiday and that I escaped much of the hardship caused by the snow and cold temperatures of the last major snow event. But I'm certain my prayers were heard," he said.

"I prayed for rain with Vision Vancouver city councillors via Skype almost every night that I was away. It took a real chunk out of my vacation," he complained.

"But in the end, we all make sacrifices. We did everything we could and I can tell you, we prayed hard," he said. "I mean, it did eventually rain," he added.

City of Vancouver general manager of engineering services Jerry Dobrovolny says while the city's enviable contingent of snow- and ice-clearing equipment will be deployed around the clock, the only way to ensure that the main streets remain passable is through constant and unrelenting prayer. "We will be focusing our prayers on the main thoroughfares," Mr. Dobrovolny said.

"Sure, we're salting and brining the roads right now, but we know that doesn't cut it. Especially on the side streets. Snowfalls are relatively rare events in Vancouver, but experience tells us that praying for rain works. Unfortunately, we simply don't have the resources to pray for every kilometre of back lane and side street," he said. "It's something we'll be looking at when we review our pray for rain response in the spring."

Mr. Dobrovolny reminded homeowners and property managers that praying for rain is their responsibility.

"Current bylaws state that every homeowner has an obligation to pray for rain on the sidewalk in front of their own property by 9 a.m. each day. Failure to do so may result in a warning or a fine of $167," he said. Fines will increase for continued non-compliance. As for monitoring and enforcement, Mr. Dobrovolny said, "We know who's praying and who isn't. We're keeping a close eye on it."

"We would like to ensure citizens that this time around, we intend to pay special attention to public properties, for instance sidewalks around parks, community centres and schools," Mr. Dobrovolny said. "You will see city workers at every site, praying in shifts."

He also said the VSB has its own strategy for praying the snow away on school property.

The city is aware that its commitment to prayer as a snow-clearing strategy has drawn some criticism, especially among Vancouver's more secular citizens.

Mayor Robertson said the effort includes all Vancouverites. "Look, I don't care about your belief system. We're not saying who you need to pray to. You may be religious or not. Pray to Gaia or the universe or the fates or the creator or whatever. I myself will be praying to David Suzuki. But the evidence tells us that the only way to clear up the mess is to pray for rain."

Mayor Robertson points out that major snowstorms in 2008 and again in 2012 were only cleared after sustained prayers for rain. "It's science," the mayor said.

City officials concede that prayer texts have been in short supply, and that few retailers have restocked them after the last storm. The mayor says that's why leaflets with suggested prayers are being distributed at 12 fire halls beginning today. "We're asking that people take only as many leaflets as they need," he said.

The city is also reminding residents to help those not able to pray for rain on their own.

"We're asking residents to pray for their neighbours, especially the elderly or infirm. This is a time when we all need to pull together," Mayor Robertson said.

The city will continue to monitor the situation throughout the weekend and additional bulletins will be issued as required.

A taste of real winter and Vancouver just can’t keep it together
January 6, 2017 Amid Vancouver freeze-over, city officials only pack on the blame
January 6, 2017 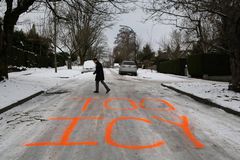 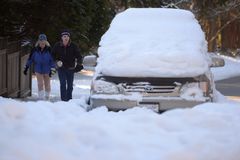