Bill Good didn't want to make his last few weeks at CKNW all about his goodbye. He wanted to continue to do what's made him a broadcasting legend in this town: discuss the issues. But callers to his talk show haven't been able to help themselves.

"First I'd like to congratulate you on a fantastic career. You've been a huge inspiration for me," one caller began during a segment last week, before launching into his thoughts on an MLA's proposal to bring in a guaranteed minimum income.

Mr. Good hosts his final show on CKNW on Friday, signing off after 50 years in broadcasting – 26 of them at 'NW, and all of them based in B.C.

The Globe and Mail spoke with Mr. Good, now 68, in the green room next to his studio, after a busy show.

Your dad [Bill Good Sr.] was a broadcaster. Was that what made you interested in this field?

Yes. As a youngster, I watched my dad, who was a very prominent sports broadcaster, travel the world, meet interesting people, always seeming to be having a good time and being well compensated for it. My mother says when I was four years old I was speaking into a spoon pretending it was a microphone, so there was never any doubt in my mind what I wanted to do. The funny thing is I swore I would not do sports, and I happened to join the CBC at about the time the Vancouver Canucks were coming into the market. They wanted me to audition for Hockey Night in Canada, which I did, and I spent 10 wonderful years there, and did two Olympics and the Soviet-Canada hockey series. So some of the highlights of my life came from doing what I swore I wasn't going to do. So I tell young journalists: Don't get too fixed on what you're going to do when and where; take the opportunities as they come along.

What was your first job in broadcasting?

After a year he went to CFAX in Victoria and joined the CBC in 1967, first doing radio before moving to TV news. In 1988, he left CBC for CKNW. He also anchored the news on BCTV and then CTV before leaving at the end of 2010.

I know it's an impossible question but are there any interviews from over the years that really stand out for you?

I've had so many. One of my first interviews with a senior politician was with Pierre Trudeau the morning after the constitution was repatriated. At that time, I was a pretty young news anchor and I was pretty intimidated by him. And when he died, I was terrified that the CBC was going to run that interview again, which they did, and it turned out I did pretty well. But here he was still intimidating me after he was dead.

I've always thought the guest should be the most important part of the conversation. And that's not always the case in talk radio.

How has talk radio changed over the years?

It's evolved more than changed. The biggest change probably is the technology. When I started, most people were calling from home and on land lines and now almost all of my calls come from cellphones.

The business has gotten more serious. When I was doing television in the old days at CBC, a cameraman mooned me, a producer crawled under the desk and rolled my socks down and when that didn't work, he put his hands in my pockets. And instead of laughing I finally looked at him and said would you please just go away? Stuff like that doesn't tend to happen any more.

There's no question CKNW has been hugely influential over the years but the ratings have been in decline recently, and there are some big personnel changes here [morning show host Philip Till's last show was Thursday]. What's going on?

It always changes and there's no question this is a difficult time for talk radio around North America. A few years ago they instituted something called [Portable] People Meters (for ratings), which requires people to wear little pager-type devices, and my understanding is that this audience isn't terribly inclined to wear those things. They also give FM stations a huge advantage because if you walk into your doctor's office and they're playing an FM station at a very low level, they get a rating for it, even though people aren't really listening to it. Plus our signal has deteriorated terribly downtown; we've tried for a long time to get an FM signal and the CRTC hasn't seen that our way. But with the e-mail I get and the Twitter activity and Facebook and the phones, I don't get any sense that there are fewer people out there or that they care any less about the issues.

Are you concerned about the future of the business?

I'm concerned about the future of media. I think there are fewer and fewer ways for people who want intelligent information, discussion, debate to get it. There's no question in my mind I've lived through the best of times in terms of local television and local radio and I suspect you would say the same about print. Nearly all of the news organizations now are owned by big corporations who are run more by accountants than by broadcasters and all they're looking at, generally speaking, is short-term, quarterly results.

That's the part I don't like. I would be much happier today if I was leaving and somebody else was coming in as a young person on a track to make the kind of money I've made. I don't see it happening and that's a real shame because then the business won't attract the quality of people that it has in the past.

Was this your decision or is someone trying to get your big salary off the books?

What are your hopes for your own life now?

I've never had a game plan. The only one I had I screwed up terribly: I wasn't going to do sports. I anticipate that there will be people out there who will want to involve me in various projects but I don't know what they are. Maybe there won't be any and I'll really have to retire. 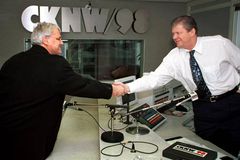 Kirk LaPointe crosses the thin line between journalist and politician
May 11, 2018 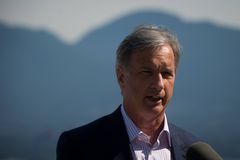 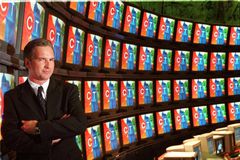