Two years after a grisly murder-suicide in Oak Bay that left five members of the same family dead, British Columbia's representative for children and youth released a report describing a system that too often failed victims of domestic violence. The province had not co-ordinated domestic violence programs, Mary Ellen Turpel-Lafond wrote, or given teeth to family law.

Nearly five years later, Ms. Turpel-Lafond finds herself repeating the criticism. There have been at least eight high-profile incidents of domestic or family violence in B.C. in the past six weeks, six of them fatal. The Ministry of Justice says there has been a 72-per-cent reduction in intimate-partner homicides between 2008 and 2013 – from 22 to six – but there have already been seven cases to date this year. One woman died in each of the seven cases; two were followed by a man committing suicide.

"In my time as representative … I don't think we've ever had a spate this severe," Ms. Turpel-Lafond said Monday. "It certainly shatters any illusion we have that we're providing safety on the ground for women."

The problems that exist today existed back on Sept. 4, 2007, the day Peter Lee killed his six-year-old son, his estranged wife and her elderly parents in Oak Bay. They include an unco-ordinated response system, a lack of domestic violence courts and toothless restraining orders that are served not by police officers, but sheriffs or process servers, Ms. Turpel-Lafond said.

In 2009, a coroner's inquest into the Lee killings produced a number of recommendations, including a provincewide domestic violence unit and consistent training in threat assessment across the criminal-justice system. As of April, 80 per cent of municipal police, and 60 per cent of RCMP who work on the front lines, had completed domestic violence training, according to the Ministry of Justice.

The government in February launched a three-year, $5.5-million provincial domestic violence plan and Ms. Anton has said the government spends about $70-million on "crime prevention and victim services," including help lines and domestic violence units. But Ms. Turpel-Lafond says it means little without adopting a comprehensive model. She also questioned exactly what is rolled into the $70-million figure. "How much are they actually spending today on domestic violence versus what they spent five years ago?"

Leonard Krog, NDP critic for the attorney-general, said the plan means little without funding to back it up.

"This is as empty as Christy Clark's promises to eliminate bullying in the school system," he said. "It is just as empty as that. It is a public relations exercise with little or no real substance."

Ms. Anton on Monday said recent incidents are "a sign we need to be paying attention, no doubt about that, but the [domestic violence] trend in B.C. has been steadily decreasing."

Several high-profile cases of domestic violence in B.C. have made headlines in recent weeks. Most recently, Vancouver police found the body of Thi Tam Nguyen, 27, in her home on East 41st Avenue near Rupert Street on Saturday. The next day, a 13-year-old boy walking along a trail near Gladstone Park in south Vancouver discovered the body of Ms. Nguyen's ex-husband, Cong "Danny" Nguyen, 31, the victim of an apparent suicide. Their four-year-old son, now an orphan, is staying with family.

A week before that, on May 4, the body of a woman – whose name police have not yet released – was found in an apartment complex on Granville Avenue at Gilbert Road in Richmond. Her husband, Wu Jian Hua, 41, was charged with second-degree murder the next day. On April 28, Saanich Police located the body of Anne Harvey, 61, in her Newton Street home and the body of her husband, Neil Harvey, 59, submerged in water off of Cattle Point. Investigators determined Mr. Harvey had killed his wife and then himself. Seven days before that, Angila Wilson, a 33-year-old mother of three, was found dead in her Clearwater home. Her common-law husband, Iain Drummond Scott, 42, was arrested after an hours-long standoff with police and charged with first-degree murder.The children were removed from the home. 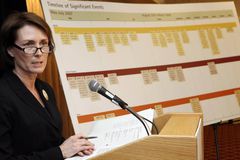 Opinion
B.C. is failing to protect children at risk
February 14, 2014 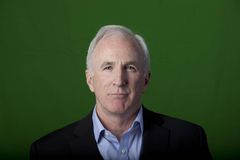 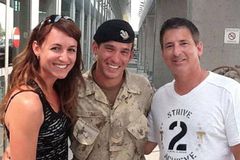 Follow Andrea Woo and Justine Hunter on Twitter @andreawoo @justine_hunter
Report an error Editorial code of conduct
Due to technical reasons, we have temporarily removed commenting from our articles. We hope to have this fixed soon. Thank you for your patience. If you are looking to give feedback on our new site, please send it along to feedback@globeandmail.com. If you want to write a letter to the editor, please forward to letters@globeandmail.com.
Comments are closed