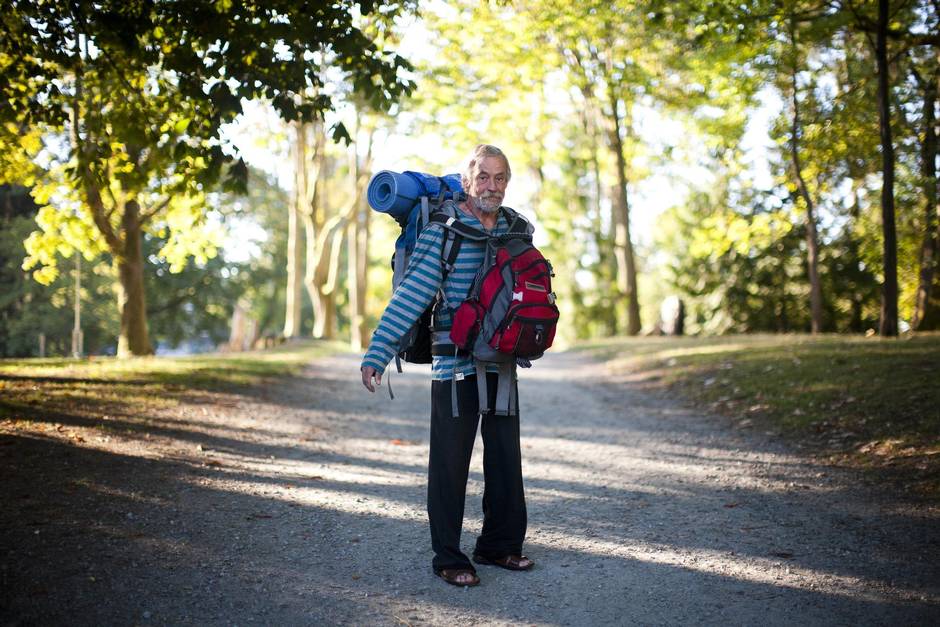 Michel Curadead, 61, is a resident of Stanley Park in Vancouver (Rafal Gerszak for The Globe and Mail)


Roughing it in the rainforest


Stanley Park is a haven for scores of homeless people, many of them just
passing through. But for a hardy few, the giant cedars and picnic grounds provide
a welcome roof over their heads. Ian Bailey reports


It’s polite to call ahead before dropping in on someone’s home, but that courtesy isn’t really possible with the makeshift residence deep inside Stanley Park.

So park ranger Chad Cowles calls out, asking if “Chris” is up for a chat with a Globe and Mail reporter and photographer on a tour to see the reality of homeless people living in the 400 hectares of rainforest that make up one of North America’s largest urban parks.

Chris has been here for at least 20 years. He’s a “one of a kind” resident, says Mr. Cowles, in an area of the park where the forest is so dense and fragrant that it seems to have a confining weight.

To an observer awaiting his possible hospitality, Chris’s home is a hole around the roots of a massive fallen cedar, but as Mr. Cowles notes the 60-ish resident has also “MacGyvered” lean-to shelters for sleeping and eating.

Out of earshot, Mr. Cowles speaks, responds to Chris, and then abandons the effort, navigating around bicycle tires, tarps and garbage bags as he approaches, shaking his head. Along the path, there’s a thick branch leaning against a tree that has an eagle’s head carved at the top. “He just went down for bed,” Mr. Cowles explains. “He was not happy to be awoken. He’s a little upset.”

Mr. Cowles says there is no rush to remove Chris, who lives quietly, does wildlife experiments and goes into downtown Vancouver for meals. There’s no sign of needles, weapons or fires – the three things that would prompt enforcement, possibly a call to police. “He’s been grandfathered. Until we have a need to find an alternative living situation, it’s tolerable for us.” 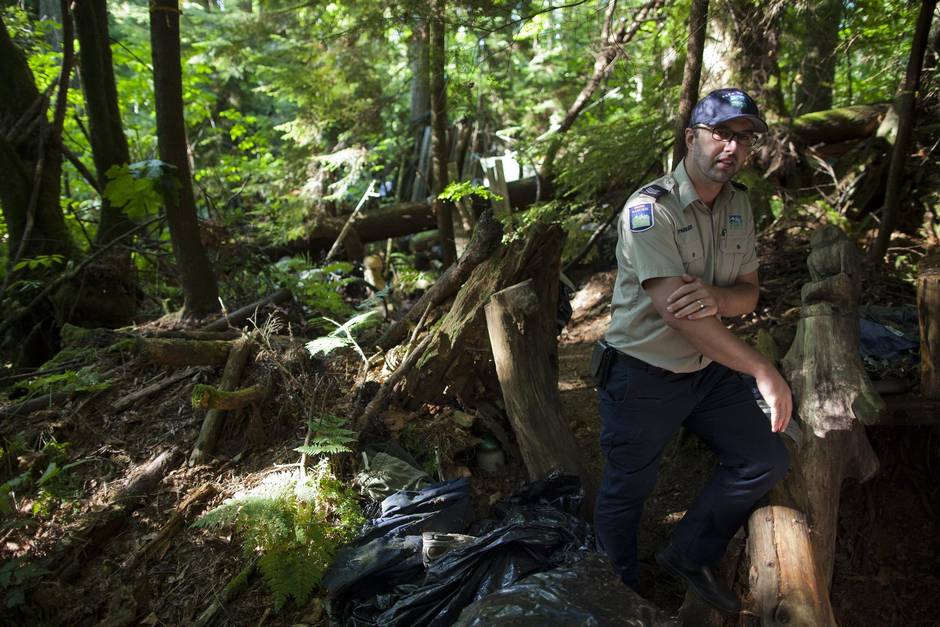 Vancouver Park Ranger Chad Cowles stands outside a makeshift camp of a resident who has been living in Stanley Park for more then 20 years. (Rafal Gerszak for The Globe and Mail)

The realities of managing this urban Vancouver legend reflects an oddly lenient stand the Vancouver Parks Board has taken with park residents, some opportunistic, intermittent travellers, and other more dedicated residents, who spend a lot of time in the park, which was once home to First Nations communities.

Mr. Cowles estimates there are up to 30 to 40 people in the park in the summer, but the number drops to a dozen year round. In March, Vancouver did its ninth annual homeless count, tallying up the number of homeless in the city, but the results aren’t broken down by geographical area so there’s no measure for the park.

The park board’s approach to the people living in Stanley Park seems in contrast with last year’s move by the city and police to clear protesters living in Oppenheimer Park. However, officials say the realities are more complicated in such a massive, urban green space.

“Chasing people from park to park is not the answer,” says Mr. Cowles, superintendent of citywide services in charge of the Vancouver park rangers. “At times, there are people who are not interested in shelters or housing. We just actively try to manage their situation so they don’t actively impact park users during the day.”

Long before it was a city park, Stanley Park on the northwestern end of downtown Vancouver was home to First Nations in the region.

The Burrard, Musqueam and Squamish First Nations all lived in the densely forested area, which went through change as Europeans settled in the region.

Stanley Park was logged. Later it, was a military reserve. And in 1888, two years after the City of Vancouver was incorporated, the area was officially opened as a park – a role that now draws millions of visitors, both local and tourists.

There are 240 parks in Vancouver, but 400-hectare Stanley Park is the most prominent.

The park was named for Frederick Stanley – Canada’s sixth governor general, who dedicated the park during a visit to the city the year after its opening. He is also the namesake of the Stanley Cup.

At root, the allure of Stanley Park is obviously its age-old forests, its beaches, and the Lost Lagoon freshwater lake.

The board’s approach has led to protocols that were evident at a recent 7:30 a.m. encounter, as Mr. Cowles approached about six sleeping people in a covered picnic area, where he attempted to wake them up.

While Chris lived so deep in Stanley Park that it was possible to believe one was far from anything urban, the group gently roused by Mr. Cowles had slept within sight of apartment towers in the city’s West End.

And they are far more chatty.

“Is there somewhere close where we can, like, do laundry?” says a woman’s voice from a sleeping bag on the floor.

That question comes from 19-year-old Emily from Kelowna. She declined to give her last name, as did her partner, Jade, 26, from Lloydminster, Sask.

The pair have been rambling around Canada and ended up in Stanley Park. They had been in the camp for three days after a two-week visit months ago.

Skunks have bothered them, but people don’t, says Jade, thanks to their “pit-boxer collie,” Carlito. “He’s a nice dog, but people tend to leave us alone because he looks nasty.”

They obtain food by begging at restaurants near closing hours when operators are eager to get rid of items, but have thought of harvesting berries.

In his acclaimed 2001 novel Stanley Park, author Timothy Taylor writes about homeless characters feasting on geese caught and cooked in the park.

In an interview, Mr. Taylor said he had heard the story of a pair of foreign sailors who had taken such an culinary opportunity. “There’s a lot of imaginative work in that novel based on small suggestions of things I saw,” said Mr. Taylor.

Mr. Cowles says there’s no real-world evidence to suggest the homeless are consuming park wildlife. If they were, he says he expects his team would have found carcasses, possibly animals wounded while being hunted. None have turned up. 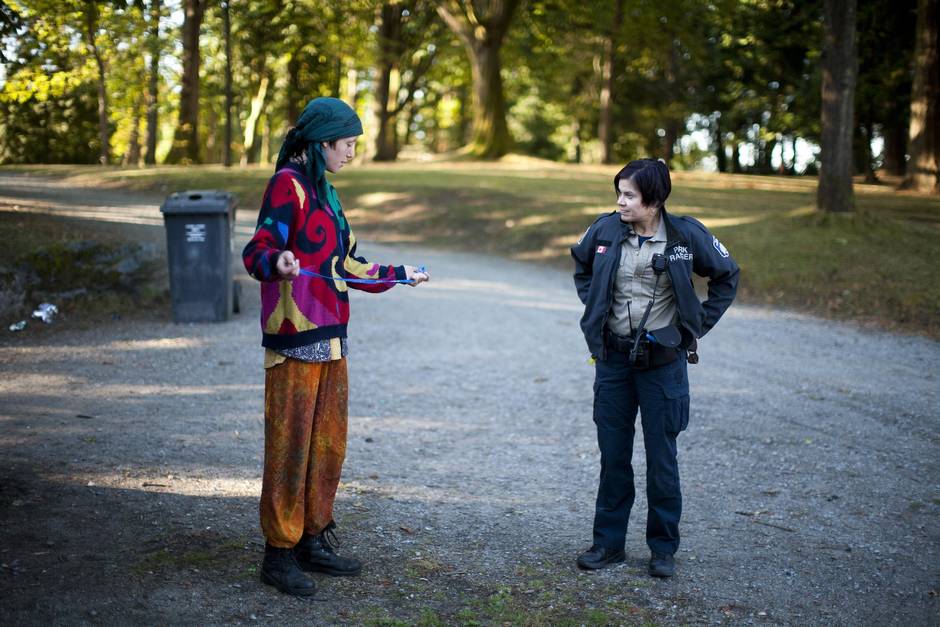 Park Ranger Christian Niven, right, gives a dog leash to Kamara Hewellyn, who has been staying for serval nights. (Rafal Gerszak for The Globe and Mail)

Emily and Jade prefer the park to shelters, which would not allow Carlito, their two cats or pet rat. Nor could they be together. “He’d be with hundreds of men. I’d be with 50-plus women. It would just be a really shitty sleep for the both of us,” says Emily.

Jade likes being in the park. “If you get a good spot, you can feel a little wild – just the surroundings. It makes you feel down to being natural man. It’s heaven. It really is. As humans, we’re prepared for this. We just choose the luxury of having a home and planting roots.”

Felipe Basoalto, 38, became a Stanley Park resident after losing his job at a marijuana farm, and is now busking to make money to go home to Ontario. He’s with his 21-year-old girlfriend Kamara Llewellyn from Prince George.

Sixteen years ago, he ended up with a “horrible, itchy” case of scabies after staying in a shelter – an experience that turned him off that option. “People that are in shelters are usually kind of, like, you know, not doing so hot. Whereas people camping are usually okay with nature. They’re not hurting so bad. You can enjoy it.”

For a while, Mr. Basoalto tried Wreck Beach, which is located on the western outskirts of the city at the bottom of a bluff below the University of British Columbia, but it “has gotten a little weird.” He says the RCMP, which police the university, has a more offputting presence than the local Vancouver police in Stanley Park.

He says the Stanley Park rangers have been “really, really nice” by leaving bathrooms open and occasionally providing an extension cord to help with recharging items. 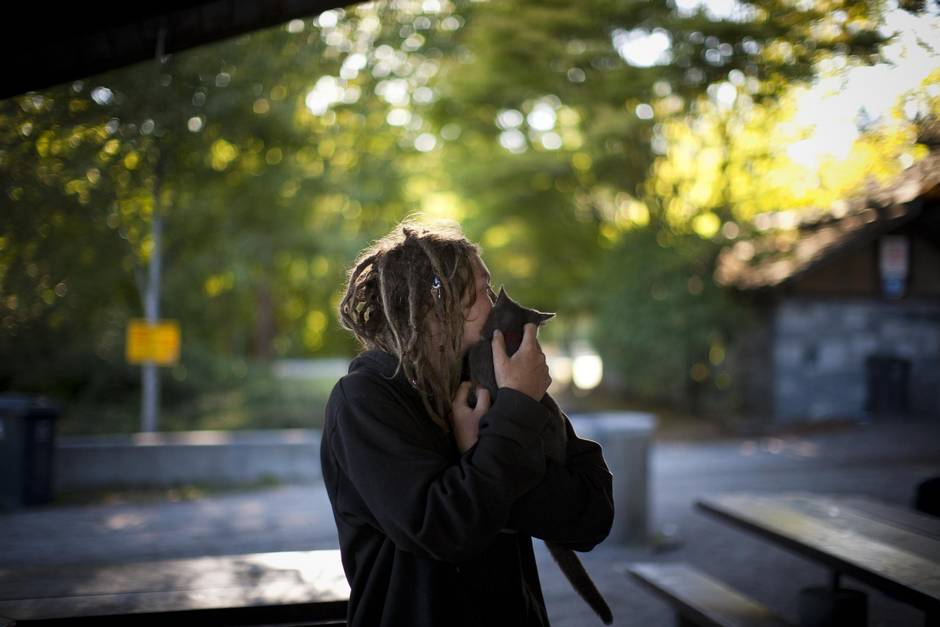 Emily awakes in the park with her cat, where she has been staying for several nights. (Rafal Gerszak for The Globe and Mail)

There are outlets for charging smartphones. Busking is going well with nights where he’s made up to $300. And nights in the park are fun, he says, especially when clusters of musicians get together.

But the harder edge of life in the park left Michel Curadead, 61, in hospital.

Two months ago, the Labrador native had finished dinner and was cleaning his pot at a park washroom. “I put my stuff away. A guy tap my shoulder. I turn around. He punch me. I never saw his face.”

Mr. Curadead’s nose was broken and he spent three days in hospital. His injuries cost him his season as a fruit picker.

Sgt. Randy Fincham of the Vancouver police said reported assaults on homeless people in Stanley Park are rare, and police continue to have a presence in the park with their mounted unit and officers using bicycles and patrol cars.

Still, Mr. Curadead remains in the park, his intermittent home for more years than he can remember, maybe a decade.

In conversation, it’s clear it will always be an option for him. “I am sleeping good,” he says.