He's played on the Canadian rugby team and served as a referee – and Steve Thomson said that experience will prove invaluable in his new role as the B.C.'s legislature Speaker.

"I think that prepares [one] well for the skirmishes," he said.

Mr. Thomson, a Kelowna MLA who was first elected in 2009 and recently served as the Liberal government's forests minister, was acclaimed Speaker Thursday. The choice was heralded by both the NDP and the Green Party, though it remains to be seen how long Mr. Thomson will remain in his new role.

Opinion: BC Liberals' policy reversal is one last grab for power

Read more: How B.C.'s Liberal minority government could fall, and what happens next

The NDP and the Greens have said they will topple Premier Christy Clark's minority government at the earliest opportunity – likely next week. The Liberals hold 43 seats, while the NDP has 41 and the Green Party has three.

The Liberals have suggested none of their members would serve as Speaker under an NDP government. That would force the NDP or the Greens to put forward a Speaker who would routinely break tie votes, traditionally a rare occurrence.

Mr. Thomson, meeting with reporters after he was acclaimed, would not say how long he expected to remain as Speaker.

"It's not for me to speculate about what may happen going forward. My role is, and my focus will be, to manage the house and the legislature with the best of my ability, with fairness and integrity, as we reconvene," he said.

When asked if he would resign if the Liberal government was defeated, Mr. Thomson said: "It has been the practice that if the government changes, that it's the government that identifies a Speaker."

NDP Leader John Horgan, in a nod to the uncertainty, thanked Mr. Thomson for serving in the "days and weeks and months and years ahead."

Mr. Horgan described Mr. Thomson as "a man of the highest integrity" and said he knows Mr. Thomson will take his new position seriously.

Green Party Leader Andrew Weaver said he could not think of "a more exceptional choice" to guide the business of the legislature than Mr. Thomson. He said Mr. Thomson has the respect of all MLAs and brings experience, dignity and honour to the role.

Mr. Thomson, 65, served as minister of energy and minister of agriculture before taking over the forestry portfolio in 2011. He previously worked as executive director of the BC Agriculture Council and as general manager of both the BC Fruit Growers Association and the BC Milk Producers Association.

Mr. Thomson – like Mr. Horgan and Mr. Weaver – has long been a fan of rugby and is a former member of the Canadian national team. Mr. Thomson, speaking at a Rugby Sevens Series news conference last year, said his on-field nickname was "the Blue Ox."

Tom Dyas, president of the Kelowna Chamber of Commerce, a position Mr. Thomson previously held, said he has several qualities that bode well for a Speaker.

"He's an individual who is going to think through the process very well, who is going to respond with intelligence. I don't think I've ever seen Minister Thomson get rattled in that sense," he said.

When asked if he remembered a time that he disagreed with Mr. Thomson, Mr. Dyas laughed and said when "dealing with an advocacy role, there's always good discussion."

Susan Yurkovich, president of the BC Council of Forest Industries, said her organization has worked collaboratively with Mr. Thomson over the past number of years and he has been a champion of the forestry sector.

The forestry sector has drawn considerable attention in recent months because of Canada's softwood-lumber dispute with the United States. Ms. Yurkovich said she expects that whoever leads the provincial government will make softwood a top priority. 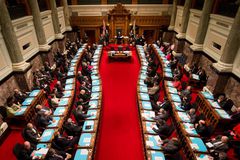