The Supreme Court of Canada has reserved judgment after oral submissions in a case concerning the Ktunaxa Nation and the Jumbo Glacier Resort, a proposed year-round ski resort in southeastern B.C. that has been in the regulatory process since 1991.

The case concerns freedom of religion, aboriginal spirituality and how Charter rights should be applied when it comes to land-use decisions – including sites considered to be sacred.

The Ktunaxa Nation is arguing that the province violated the Ktunaxa's freedom of religion, and breached its duty to consult, when it approved a master development agreement on Crown land in March, 2012.

Both the Supreme Court of B.C. and the B.C. Court of Appeal have ruled against the Ktunaxa on those points.

The ski resort would be built in an area known to the Ktunaxa Nation as Qat'muk and considered the home of the "grizzly bear spirit."

The Supreme Court of Canada case drew more than a dozen intervenors, including the attorneys-general of Canada and Saskatchewan and the Canadian Chamber of Commerce.

The hearing took place Thursday and it is not known when a ruling will be made.

"I think the [Supreme Court of Canada judges] were provided with a lot of things they need to think about," Kathryn Teneese, chair of the Ktunaxa Nation Council and one of the appellants in the case, said Thursday from Ottawa.

"The whole notion around aboriginal law as it relates to the Constitution and now the Charter – we are into new ground here," she added.

In a factum filed for the case, the Ktunaxa argued the appeal "is of great importance for all aboriginal Canadians living traditional aboriginal spirituality."

"If the B.C. Court of Appeal's decision is allowed to stand, aboriginal Canadians, whose spiritual beliefs and practices are often inextricably bound up with and dependent upon specific areas of land, will be precluded from obtaining Charter s. 2 (a) protection," the factum said.

"This consequence has far-reaching negative implications for aboriginal spiritual traditions, cultures and identities, and Canadian society."

"The core of the case is really about what freedom of religion means," said Jessica Orkin of the B.C. Civil Liberties Association, one of the intervenors in the case.

"And both of those issues were before the court today."

The resort proponent, Glacier Resorts, says the Ktunaxa "fundamentally changed" their position in 2009.

"Up to at least mid-2009, the Applicants represented that their concerns with regard to development of the Resort, including spiritual concerns, could be addressed," proponent Glacier Resorts said in court documents prepared for the case.

"Glacier went to extraordinary lengths and made many changes to the Resort to address the Applicants' concerns. The Applicants now assert that no accommodation is possible and that they have a veto over development of the Resort in any form."

The Supreme Court of Canada case is the latest twist in a long-running legal and regulatory saga for the Jumbo resort, which was first proposed in 1991.

It received its first environmental certificate in 2004. It was extended in 2009, with an expiry date of Oct. 12, 2014, and a provision that approved projects must be "substantially started" under provincial law by that date.

In June of 2015, the province said the environmental-assessment certificate had expired because the work undertaken didn't meet the threshold of a "substantially started" project.

Glacier Resorts has filed a petition to the Supreme Court of B.C. against that decision.

On Thursday, a spokeswoman with the Ministry of Forests, Lands and Natural Resource Operations said the proponent of the resort submitted a revised master plan that was smaller in scope, but that proposal was not accepted by the ministry. 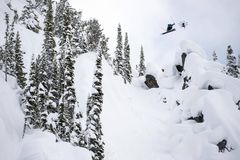