But Dianne Watts has a much more complex background than what shows on the surface. It includes ditching a domineering stepfather, an abusive early marriage and small-town life in B.C.'s Okanagan Valley to roam around the world for years, a period during which she developed a long-term attachment to Buddhism.

All of that helps to explain in part why Ms. Watts has driven an agenda aimed at transforming Surrey into an urban place. She knows what it's like to make a radical break with the past. And she has spent some time in great cities around the world.

"As a younger person, I loved London," says Ms. Watts, who still keeps a Buddha statue in her office. "When I travelled through Europe, the uniqueness of so many of the cities and the architecture struck me. That's been an interest of mine for many years. And I lived in Sydney. That had a significant impression on me early on."

Now she's in a position to bring her ideas to reality by unleashing Surrey's long-suffering planning department, which had spent many years simply trying to maintain some control over the flood of development applications in the booming suburb.

"No previous administration was prepared to do that," Ms. Watts says. "But I'm pretty stubborn and prepared to take action."

That stubbornness is a quality that some of the people in her life realized only belatedly, at their peril.

Finally she decided she didn't have to put up with any of it any more, and left both her husband and Kelowna for adventure, taking a boat from San Francisco to Australia, which became her base for trips around the world for almost a decade. She learned to scuba dive, hiked in Nepal, travelled through South America, visited Europe.

She moved back to B.C. in the late 1980s and moved to Surrey when she married Brian Watts, whose family had a manufacturing business there, in 1992. She wasn't much of a political animal - she had spent time in Australia working as a credit manager for a garment industry and worked in Surrey for a construction-related company, at a time when few women were in that business - but her husband had helped out with provincial campaigns.

Ms. Watts got involved in a friend's campaign in 1996 and it did so well that, when the municipal election came around later the same year, she was recruited to fill out the ticket for a new political party forming in Surrey.

Her stubbornness showed when a campaign organizer told her that she didn't have a hope - she was just a place-filler on the ticket. She campaigned furiously and won a spot. She quickly became a popular councillor under then-mayor Doug McCallum.

But after several conflicts with Mr. McCallum over the years, she quit his party. Shortly after, in 2005, she decided to challenge the three-term mayor as an independent with no party behind her. She beat him by 10,000 votes and, after a rocky period at the beginning with a hostile council, she brought everyone together. She currently runs with a party she created herself that has no memberships and no meetings - it consists of her and the Surrey councillors she has decided she can work with.

She has attained remarkable political capital along the way, with her name in circulation as a possible successor to Premier Gordon Campbell as leader of the B.C. Liberal Party.

Ms. Watts's ability to manage conflict and to hang on to a long-term plan in stormy waters is a quality people say she'll need to transform Surrey from the bedroom suburb it was for decades. Remaking a downtown is no one-term job.

"Vancouver's downtown transformed itself tremendously in the last 20 years. But you've got to stick to it," says Warren Gill, an urban-issues expert and administrator with Simon Fraser University, whose satellite campus is housing in Surrey Central City tower. "Previous Surrey administrations would always change their minds. There was no focus. This administration is different."

Ms. Watts acknowledges that it's going to be a long haul. "It's about bringing all the pieces together. Building a city and a downtown, it's a work in progress." 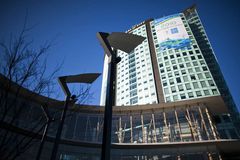