The popular mayor of Surrey has cast a shadow on the campaign to succeed her, with one leading candidate accusing a rival of trading on Dianne Watts's endorsement instead of defending her own policies during a debate Thursday.

City Councillor Barinder Rasode levelled the criticism at Linda Hepner, another city councillor, who helped Ms. Watts create the Surrey First party that has a majority on council.

Ms. Watts has declared Ms. Hepner to be her choice to lead British Columbia's second-largest city.

"You can't hide behind the coattails of a really good mayor. The mayor is not going to be the one who is accountable to citizens after Nov. 15," Ms. Rasode told Ms. Hepner.

"We can't use a previous elected person's name to move our city forward."

Seven candidates are seeking the mayoralty, but Ms. Hepner, former mayor Doug McCallum and Ms. Rasode are leading the polls so far. On Thursday, they were at a debate convened in Vancouver by radio station CKNW.

Ms. Hepner and Ms. Rasode spent the debate criticizing one another, while Mr. McCallum tried to stay above the fray by detailing his policies and refraining from attacks.

Ms. Hepner said she had great respect for Ms. Watts and was "thrilled" to be endorsed by her, but added: "I do not need her at my side as we grow Surrey into the future. I am offended at that remark."

Crime has been a key issue in the election after a series of high-profile incidents, including fatal attacks on a hockey mom waiting for her son at an arena and a 17-year-old girl walking home. Suspects have been arrested in both cases.

Ms. Hepner has been arguing for continuity along a policy path that has seen Surrey grow, but is facing allegations of being an overly cautious advocate for the status quo and its associated problems.

Mr. McCallum has touted experience gained in almost a decade as mayor that ended with Ms. Watts defeating him in 2005. However, critics say he wants to take Surrey backward after a decade of growth. His record has also proved a target: Ms. Hepner has noted that Surrey had a high rate of auto theft while Mr. McCallum was mayor. "This is not a man that can manage public safety in our city," she said.

Ms. Rasode was elected a Surrey First councillor, but quit the party to run for mayor under her One Surrey banner with seven council candidates. She has been accused of going along with the Surrey First program on crime management until it suited her political purposes to attack her former party.

All three candidates are promising to increase the number of Mounties in the Surrey RCMP detachment, though Ms. Rasode is also proposing to hire 200 community safety officers, suggesting they could provide a quick response to some minor calls, such as graffiti issues. "We don't need an expensive officer with a gun coming to the smaller calls," she said Thursday.

In an unusual commitment, Ms. Rasode said she would serve a minimum three terms as mayor to make sure her agenda for the city is implemented. "Anybody who wants to do this for one term won't be accountable at election time in four years to stand strong to be judged on their record," she said. 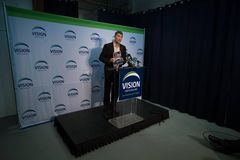 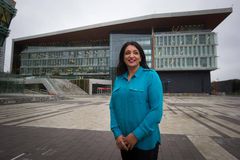 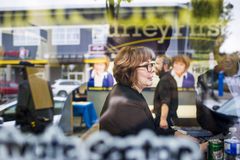 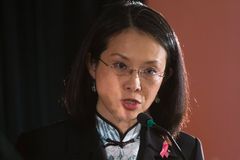 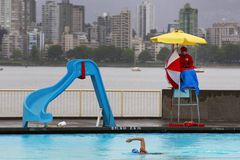