Teck Coal Ltd. is facing a massive pollution problem in the Elk Valley, where a metal-like element known as selenium is leaching out of mine sites and collecting in the eggs of fish, frogs and water birds.

Environment Canada has had investigators in the area in southeastern British Columbia collecting samples at mine sites, but Todd Gerhart, a Department of Justice prosecutor, refused to comment on Thursday when asked if charges are being contemplated.

A spokesman for Teck Resources Ltd., the parent company of Teck Coal, referred questions on the investigation to Environment Canada.

Environment Canada was unable to find a spokesman to comment on Wednesday and Thursday.

At high levels, selenium can cause embryonic deformities in fish eggs, leading to sudden population collapse. That threshold hasn't been reached in the valley, where trout populations appear to be stable. But with selenium levels creeping up in the Elk and Fording rivers, concerns are growing about the environmental impact from a century of coal mining.

"Selenium has significant impact on the reproductive organs, that's why there is a risk of population collapse," said John Bergenske, a spokesman for the environmental group Wildsight, which is calling for a moratorium on coal development in the Rocky Mountain watershed near Fernie.

Mr. Bergenske said selenium pollution has been a concern in the area for years, but the issue came into sharp focus this week when a University of Montana study showed selenium levels are 100 times higher in the Elk River than in the nearby Flathead River, which is in a watershed not touched by coal mining.

Teck responded to questions about selenium pollution with a brief statement saying the company plans to spend $600-million over the next five years on water quality projects. The company also released a selenium action plan it presented to the B.C. government in February.

But Teck's plan aims for selenium levels that do not meet B.C.'s water quality guidelines.

Chris Stannell, a spokesman for Teck, said in an e-mail the targets for the Fording and Elk rivers "are set at levels that will protect fish in flowing streams, which are much less sensitive to selenium than lake environments."

"It just doesn't go far enough," Sarah Cox, interim director of Sierra Club B.C., said of Teck's plan. "It is proposing selenium levels . . . that in U.S. would be illegal."

B.C. Environment Minister Terry Lake said Teck is clearly trying to get the problem under control and is striving to bring selenium levels down throughout the valley.

He said it makes more sense for the government to work with Teck and keep the mines viable while searching for solutions, rather than closing operations.

"We have to be reasonable," he said. "If we were to shut down mining there today we'd have [continuing pollution] problems for hundreds of years."

The company acknowledges in its action plan that "concentrations of selenium have been increasing in the Elk Valley in the rivers and streams that are downstream of Teck's mining operations." It states that since the mid-1990s, selenium levels in the Elk River have increased from estimated historical background levels of one microgram per litre to 18 micrograms per litre, and that in some areas, it has climbed to 57 micrograms per litre.

U.S. studies have shown that selenium levels above four micrograms per litre in water can lead to dangerous concentrations in the eggs of fish.

Selenium is a natural element that washes out of waste rock. It moves up through the food web, becoming increasingly concentrated in animals. Studies in the Elk Valley have found selenium in the eggs of cutthroat trout, frogs and red-winged blackbirds. 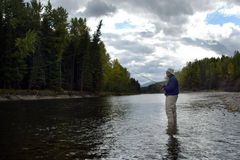 Opinion
Is it time to put the brakes on runaway coal development?
December 23, 2012