Tenants of two aging apartment buildings on the city's east side have banded together to fight eviction notices, arguing the new owner of the buildings is trying to push them out so he can do minor repairs and charge significantly higher rents to a new group of renters.

Some tenants of the buildings – at 1552 East Pender St. and 533 Woodland Dr. – have moved since August, when residents received a notice to end tenancy at the buildings. After the first notice, tenants have received two more, the most recent on Oct. 25.

But other tenants, including Cam Dean and Sarah Wenman, have remained, hoping that the Residential Tenancy Branch (RTB) will cancel the notices and allow them to stay indefinitely.

"What we believe is that the landlord has been using excuses, as well as intimidation, to try to push us out of the building – without having what they are legally required to have [to require tenants to leave]," Mr. Dean said Wednesday.

Mr. Dean says he has been a tenant of the building for about 10 years. He is a self-employed landscaper, with clients mostly on the west side, and doubts he would be able to find affordable accommodation that would allow him to stay in the city if he moved.

The buildings were sold to a new owner this summer, Mr. Dean said.

In September, the new owner – who identified himself as "Dino" – wrote to tenants, saying that "I understand there may be concerns that we have not received the City permits this quickly or not at all."

"I have been involved in this business for over 15 years. I know what is required as per the City and the RTB," said the letter, which was dated Sept. 11 and provided to The Globe and Mail.

"We do not wish to kick people out on the streets or cause any more stress [than] this already has become," the letter said. "We will try to help in any way possible as we do not want to compromise the tenant-management relationship. It can be difficult for new management to build a relationship but I trust any matters can be resolved amicably."

Tenants challenged the August notice and a subsequent one with applications to the RTB, arguing the new landlord didn't have necessary permits to do the work and that even if he did, it wasn't necessary to move everyone out to do the work.

Those applications were heard at a preliminary hearing with another hearing scheduled for Nov. 23.

Since then, the tenants have received a third notice.

That notice, dated Oct. 25, came from a law firm representing the landlord in the RTB arbitration process.

As some people have moved, there will not be as many people challenging the third notice, Mr. Dean said.

"We are fighting to save our homes – but ultimately, we are doing this to stand up for each other and the community of renters in Vancouver who are not always protected," Mr. Dean said.

According to property records, the site is owned by a numbered company with a sole director, Dinesh Chand.

He did not immediately reply to requests for comment. A lawyer representing the landlord for the properties also declined to comment.

Under city regulations, a Tenant Relocation Plan is required for redevelopment or renovation activity that results in tenant eviction, if the proposed project requires a rezoning or redevelopment permit.

Mr. Dean and other remaining tenants say there are alternatives to forcing tenants to move out, such as allowing tenants from one building to move into the other building to accommodate renovations or providing more time and compensation to seek new homes.

The city is in a housing crunch with low vacancy rates and rising home prices.

This week, the city approved new regulations to address what it says are more than 6,000 illegal short-term rentals on offer through companies such as Airbnb, saying the regulations were needed to protect and free up more long-term rental stock. 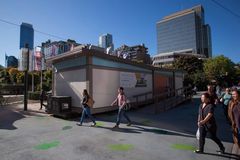